The Afghan Hound has been providing scientists with food for thought and new theories for many years. It is impossible to determine with certainty at what time, where, and how this ancient oriental breed was born (in the Islamic religion it was forbidden to create images of people and animals), but most likely, the Afghan hound has common roots with the Saluki (Persian greyhound) and Sloughi ( Arabian Greyhound), as well as some long-haired shepherd dogs. The ancestors of the Afghan hound came to Afghanistan, most likely, thanks to Arab merchants who came from the Arabian Peninsula. These graceful and bold-minded dogs were considered sacred animals among Muslims, so they were cherished, cared for, and cherished in every possible way (unlike all other dogs, which in Islam were considered unclean). 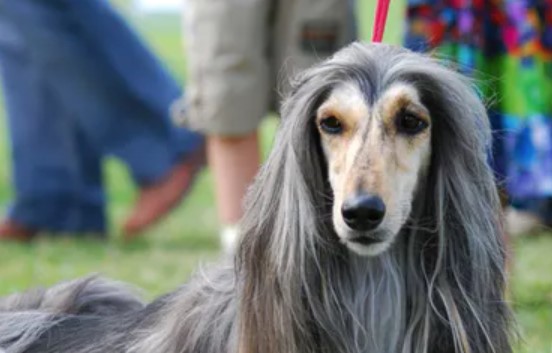 These stately and beautiful greyhounds were forbidden to be sold and exported abroad (which is why they got into Europe by smuggling), such a dog could only be received as a gift as a sign of the highest respect and recognition. The reckless, agile, and strong Afghan hound has traditionally been used for large-scale hunting in the difficult mountainous landscapes of Afghanistan: its main prey werewolves, antelopes, mountain deer, snow leopards, and jackals. In addition, the Afghans did an excellent job with the role of guards and shepherds, they also accompanied caravans with valuable cargo. At the end of the 19th century, the Afghan hound, together with the British soldiers who participated in the hostilities in Afghanistan, came to the vastness of Foggy Albion. It was in Great Britain that the development of a decorative variety of the breed began (which today is the modern Afghan hound). These exotic dogs became insanely popular in the circles of the English aristocracy, it was considered the highest chic to have such a pet for “going out”. Through the efforts of the breeders, the Afghan woman gradually changed her appearance to a more glamorous one, having received a longer coat, as well as a wide variety of colors. In addition, the Afghan hound has changed its obstinate disposition to a more calm and friendly, although eastern pride and independence are still inherent in it. Of course, not everyone liked this transformation, because fans of Afghan hounds remembered the truth bequeathed by the ancient inhabitants: a person has no right to change the nature of this proud oriental beauty. Nevertheless, the eastern hunter has become a docile pet dog, has found a new breed standard, and has become a regular participant in exhibitions and shows. Attempts have been made to cross the old type Afghan hounds (today they are called “aboriginal Afghan hounds” or “Bakhmul”) with decorative dogs, but these attempts were not crowned with success, since the differences between the two types became quite significant. The Bakhmul and the Afghan Hound were recognized as separate breeds and bred independently of each other. The Afghan Hound looks stunningly beautiful thanks to its long and silky coat. This extraordinary dog ​​has a rather thin build, but due to the abundance of hair, it does not look too thin or gaunt. The Afghan hound has an elongated muzzle, a long neck, long and strong limbs, long low-set hanging ears, dark eyes of the oriental type, slightly slanted, a low-set thin tail curled into a ring at the end. The height at the withers of Afghans is 62-74 cm, weight is 25-30 kg. The Afghan Hound’s coat is long, thin, and silky to the touch. For her glamorous coat, she even received the funny nickname “hound in pajamas.” On the face and back of Afghan women, the hair is shorter than on the ears and limbs. Of course, such beauty must be carefully looked after: after each walk, comb your pet, bathe once a month and take them to the hairdresser 2-3 times a year. Then your pet will always be elegant and well-groomed. Any color is acceptable for Afghan hounds, most often white, fawn, red, black, black and tan, blue. The only thing that is undesirable is the presence of white markings. The Afghan Hound is a sedate and reserved person. She is not used to expressing her emotions violently, but despite this, the Afghan woman with all her dog’s heart is tenderly and anxiously attached to the owner and it is very difficult to endure parting with him. The Afghan hound reacts cautiously to strangers, but does not show aggression towards them – she herself can be easily scared. So that your pet does not grow up closed and unsociable, socialize it from an early age, especially if you plan to make it a permanent participant in exhibitions – such behavior is unacceptable there. The Afghan Hound is quite easy to train, although sometimes it can show its independent oriental disposition. By the way, the owners of these dogs note the fact that these dogs listen to children with greater pleasure than adults. Try to give your pet enough physical activity on walks, but do not overdo it: these dogs, unlike the old type of Afghan hounds, are not designed for long and exhausting runs with obstacles. By the way, when running, the Afghan hound never lowers its head, as other hounds usually do. The Afghan woman is a rather quiet and calm dog, she will bother you and impose her society if she sees that you are not up to her. Also, she will not bully her relatives and other animals, because her main principle in communication is a delicacy.