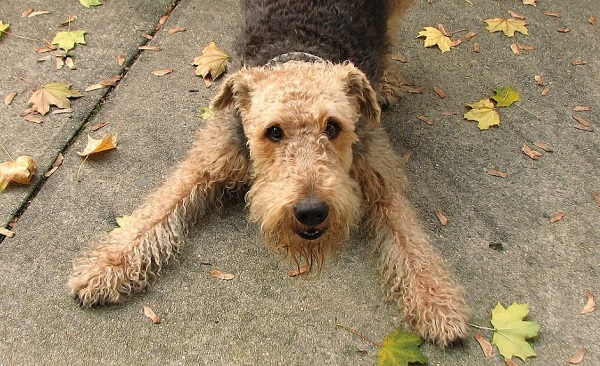 According to some reports, in the course of the history of the breed, the blood of otterhounds, bull terriers, and other terriers “merged” in Airedale terriers. According to other sources, the listed breeds also complement the Setter and Collie. But the Bull Terrier itself “consists” of English Bulldogs, White English Terriers, and other terrier-like dogs. The Otterhound is descended from the Welsh Hound, English Bulldog, Water Spaniel, French Vendée Griffins, and Bloodhounds.

So the Airedale is not just a terrier. It is a “multinational fusion” of terriers, shepherds, mastiffs, hounds, and cops.

Airedale terriers came from England. And although the Airedale Terrier breed is relatively young (its appearance dates back to the end of the 19th century), it was bred for a long time and carefully.

Long ago, Yorkshire people were inflamed with a passion for hunting the otters that live in the Eyre River. Otterhounds (otter dogs) were used for this purpose. They had excellent hunting qualities, they lacked only terrier passion and sports passion.

The hunters needed a temperamental, courageous, and indefatigable assistant with excellent hearing and eyesight and waterproof wool. Amateurs seeking to improve the breed looked closely, first of all, at the winners of competitions in catching muskrats and dog fights.

Information about the first Airedale terriers in the history of the breed was kept in the strictest confidence. However, over time, rumors about unusual dogs spread outside the district. And for the first time, the “Eyre Valley Dogs” or “Shore Dogs” were presented at a local exhibition in 1864.

At that time, no one cared about the appearance of Airedale terriers: color, constitutional defects, and coat quality. The main focus was on intelligence, courage, obedience, activity (on land and on the water), and working qualities. However, when the airedale came to the south of England, amateurs began to pay attention to improving their appearance as well.

The first club of Airedale Terrier lovers was created in 1892. The breed was rapidly gaining popularity among high society. And purposeful work began on the improvement of these dogs.

The goal was to create a large, strong and at the same time compact dog, in the appearance of which there was not even a trace of hounds, only the features of a terrier. Plus, the airedale had to have an indefatigable temperament.

The breed has long been considered almost a national treasure of Great Britain.

They were forbidden to be exported abroad. Legend has it that when the first dog at one of the exhibitions was sold to a foreigner, the outrage of the respectable British public was so great that both the seller and the buyer had to escape through the back door.

Before World War I, Airedale in Great Britain patrolled mountainous and hard-to-reach areas. Their performance was valued even higher than the abilities of German shepherds.

In the Russian Empire, representatives of the breed appeared in 1904. The Red Cross handed them over to the army as sanitary dogs. Airedale Terriers soon became the most popular (along with Dobermans) police dogs. However, in 1917, like greyhounds, these dogs fell into the millstones of the revolution.

Airedale terriers were still widely used during World War II as sappers, orderlies, and messengers. However, after the war, Dobermans and German Shepherds gradually began to overshadow them.

During the history of the breed (last century), Airedale terriers have changed a lot. Today, Airedale mostly “work” as companions, guarding houses and protecting their owners, but they are still able to master a wide range of professions.