The Miniature Poodle is a small, fun-loving and affectionate dog that needs human company, ideally always several people, to be happy. If he feels neglected or even ignored, he reacts offended. He doesn’t like being alone at all. However, since he cannot go everywhere with you, it takes a lot of patience to get him used to being without his human for at least an hour or two.

The Nature of the Miniature Poodle

Owners of a toy poodle should be active and sporty because the little tomboy loves long walks, romping in the meadow, and splashing around in the water. He is enthusiastic when balls are thrown for hours or tricks are practiced. His energy and stamina just seem inexhaustible. His ability to memorize words and follow the commands meant is particularly striking. This makes the education of the miniature poodle much easier.

The toy poodle’s great urge to move and its above-average intelligence make it a star in agility or a similar dog sport. Once the little guy is really exhausted, he actually stays with his human on the sofa for a long time and lets himself be cuddled devotedly. So he combines a calm and spirited nature and is friendly and patient when dealing with children. 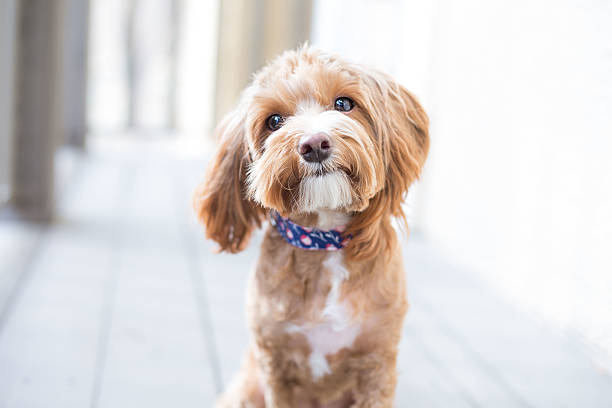 With strangers, he is initially cautious or even dismissive. He remains friendly towards strange animals. However, he can react jealously if he thinks the other is preferred by his human.

With a shoulder height of 28 cm – 35 cm, miniature poodles are small dogs. Her weight is around seven kilos. In appearance, the miniature poodle resembles the other representatives of its breed.

He has a harmoniously built body, which is about 10% longer than the height at the withers. Its handsome head is oval in shape, with a black to dark brown nose and almond-shaped eyes. Their color varies depending on the toy poodle’s coat color. Brown or apricot-colored poodles have brown noses and eyes like a noble amber.

Their long ears are carried hanging down and have frizzy hair. Like all poodles, the miniature poodle moves in a slightly springy and majestic manner. This is underlined by the short back and the perfectly raised stomach line. Its limbs are muscular, but the paws are small with arched toes. The Miniature Poodle’s croup is rounded and the tail is set high and carried over the back.

Characteristics of the Miniature Poodle (as well as of all other Poodles) is the dense, soft, and strongly curled fur, which is not changed in spring and autumn. Since the hair is always growing, it must be clipped regularly so that the poodle maintains its typical appearance.

Nature and Character of the Miniature Poodle

The cute miniature poodle makes a pleasant companion for individuals and families. He enjoys company and is a dear playmate for children who should treat him with respect. His intelligence and docility make his upbringing particularly pleasant, as he can implement commands relatively quickly.

The affection of the Miniature Poodle is striking. He adores his people and therefore always wants to make them happy. But he himself also wants to feel comfortable and therefore does everything to get the attention of his pack. If you ignore him and do something else, the miniature poodle can become impatient or even jealous.

Being alone is not to his liking either. It, therefore, requires a lot of patience and practice until the little boy is left alone at home for at least two or three hours because dogs are not welcome everywhere.

The intelligent Miniature Poodle requires consistent but loving training. The sensitive poodle does not like unnecessary hardness and loud yelling at all. Extensive play, small challenges and a lot of fun get closer to his need for harmony. When it comes to physical activity, the Miniature Poodle shows enormous stamina. He doesn’t mind long walks through woods and fields, dog sports are ideal for him. The challenges in agility, for example, put him to good use both physically and mentally. If the miniature poodle is sufficiently busy every day, it can also be kept well in a city apartment.

The Care of the Miniature Poodle

In addition to daily cleaning actions, such as keeping eyes clean, cleaning paws after a walk, etc., the Miniature Poodle’s ears require special attention. Miniature Poodles have very hairy ear canals. In combination with dirt and earwax, this can lead to blockages and, in the worst case, inflammation in the ear. The hair in the ears must therefore be removed regularly. 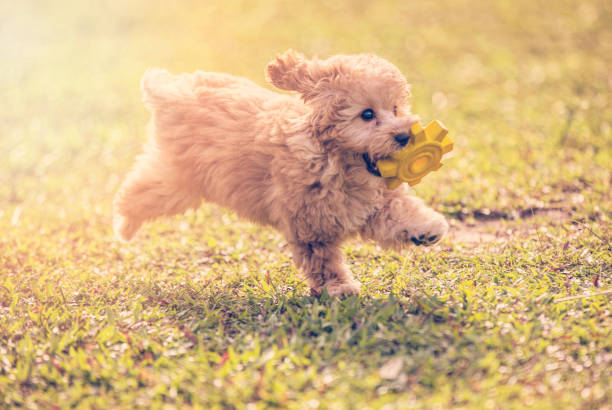 The Miniature Poodle’s teeth should also be checked at all times, as they are known to develop tartar easily. This is where brushing your teeth helps! The poodle’s teeth are brushed with a finger brush or a children’s toothbrush and special toothpaste. If he is used to this procedure from an early age, he will enjoy the attention of his human. If the miniature poodle refuses to brush its teeth, chewing bones can be given. Constant gnawing removes plaque from teeth. Stubborn tartar should be removed by a veterinarian to prevent gum inflammation.

Grooming a Miniature Poodle is quite a hassle. His soft, curly hair keeps growing and never sheds. To prevent them from matting, they should be combed and brushed extensively every day. It makes the most sense to familiarize the puppy with a comb and brush so that grooming doesn’t degenerate into a daily struggle.

Shearing is required every six to eight weeks to keep the toy poodle’s distinctive appearance. It is best to have him clipped by a professional at a good grooming salon. However, there are no insignificant costs here. If you want to save money, you can cut your poodle’s coat yourself. However, it is advisable to seek advice from a groomer on how to properly trim the coat mass, at least the first time.