The West Highland White Terrier has a strong and compact build. The straight back section and the legs are also developed to be stable and contribute to a harmonious appearance. The luxuriantly hairy head appears relatively large, and the snout is rather blunt, so it doesn’t taper to a point. Westie’s medium-sized, dark eyes, which see everything under bushy brows, are impressive. Light eyes are undesirable in breeding.

Its small, pointed ears are carried forward and have velvety hair. He carries his 13 cm -15 cm long, hard-haired tail upright. Under no circumstances may it be docked. The paws are thickly padded, hairy, and have black claws. 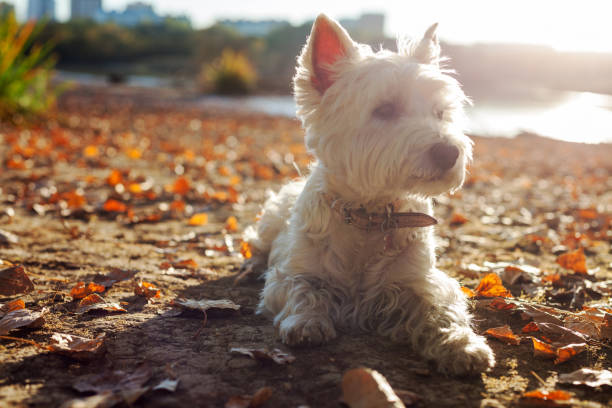 A characteristic feature of the breed is Westie’s snow-white coat, which means that the firm, straight top coat, about 5 cm long, and the soft undercoat must not be any color other than white. Regular trimming ensures its typical appearance.

The West Highland White Terrier is a small, agile dog with a strong sense of self. He is robust and playful, with a character that combines courage, alertness, and intelligence. His stamina and the desire to play and romp make him an ideal family dog ​​that can be kept well in a city apartment if he has enough exercise available.

Despite their small size, the Westie excels in courage and alertness. When encountering large dogs, he can hardly be disturbed. On the contrary, it can happen that he wants to prove his dominance here. In such situations, the little rascal must be stopped if he is not to have bad experiences. Another fact about the West Highland White Terrier should not be ignored. The breed was originally bred as a hunting dog. This drive is still anchored in his being. When released, he will hunt anything smaller than himself. In the home garden, it may still make sense for the Westie to chase the rabbits away, but in the park, it is better to be on a leash to avoid unnecessary trouble.

Despite everything, the Westie is not an aggressive dog. With the necessary training, which gives him the right place in the pack from the start, he becomes a bright and cheerful family dog ​​whose power keeps everyone moving. If he is constantly faced with new challenges, for example in the form of intelligent games, his innate urge to be active is sufficiently satisfied. The Westie loves its pack and spreads its love among all members. Of course, he will always look out for you and will defend you in case of a threat.

Grooming the West Highland White Terrier takes a relatively long time. The main part is grooming. Because the Westie does not experience seasonal shedding, dead hair must be plucked out by hand or with a trimmer every 2 to 3 months. If you don’t want to do it yourself, you go to the dog salon regularly. The “shape cut” really shows off Westie’s dense coat of hair.

In addition to grooming, eyes, ears, and paws must also be cleaned of dirt or checked for minor injuries. Dirt on the eyes is carefully wiped off with a soft cloth. A special ear cleaner is available for the ears. The paws can be kept supple with a greasy care cream. Since the Westie is prone to skin allergies, a full bath should be avoided if possible. However, if he has rolled in other people’s legacies, he has to bathe. Use a mild dog shampoo for this.

Although the Westie is a robust dog and can live to a very old age if cared for properly, hereditary diseases do occasionally occur. Allergies and skin problems are common, but can usually be alleviated or even cured by changing your diet. Patellar dislocations are uncommon but are easily treatable if medical attention is sought at the first sign. 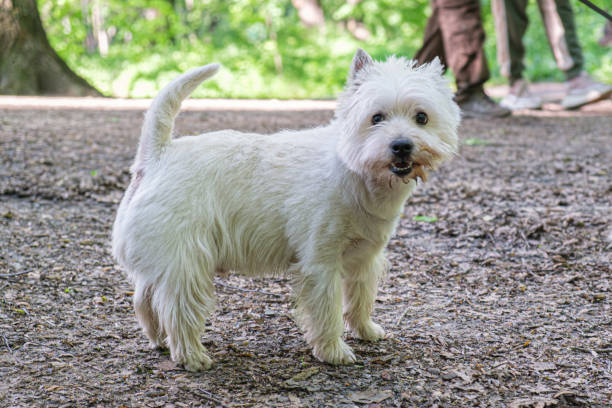 The West Highland White Terrier is also prone to dental problems, liver disease, and osteoporosis in the lower jaw. Congenital ectopic ureters are common in puppies. The ureter does not open into the bladder at the intended point. Depending on whether the dog is impaired as a result, this anomaly can be corrected surgically.

Calvé-Legg-Perthes disease occurs in young animals between the ages of 3 and 10 months. The head of the femur deforms and severe hip arthrosis develops. The disease is treatable.

Cranio-mandibular osteopathy also occurs only in young animals. These are very painful bony growths (usually on the head) that usually go away on their own. The disease is still relatively unexplored, and treatment is only partially possible.