The Alpine Dachsbracke is a popular hunting dog breed in Austria and Germany. It is used for catching small fur-bearing animals, less often wild boar. He is known for his assertive personality, good sense of smell, and passion. In his work, the dog is courageous and independent. 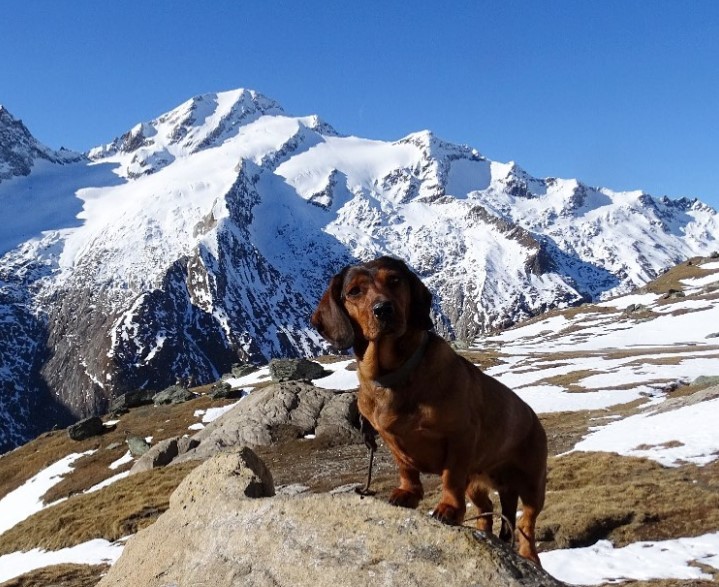 Such dogs exist and are used for hunting for a very long time in different countries of Europe. For example, Drever is popular in Sweden, and Westfalische Dachsbracke is popular in Germany. Professional breeding of the Alpine Dachsbrackes began at the end of the 19th century by the order of Prince Rudolf von Habsburg. This breed was probably bred by mixing the blood of the standard Dachshund and local Austrian Hounds.

Hunting with the Alpine Dachsbracke 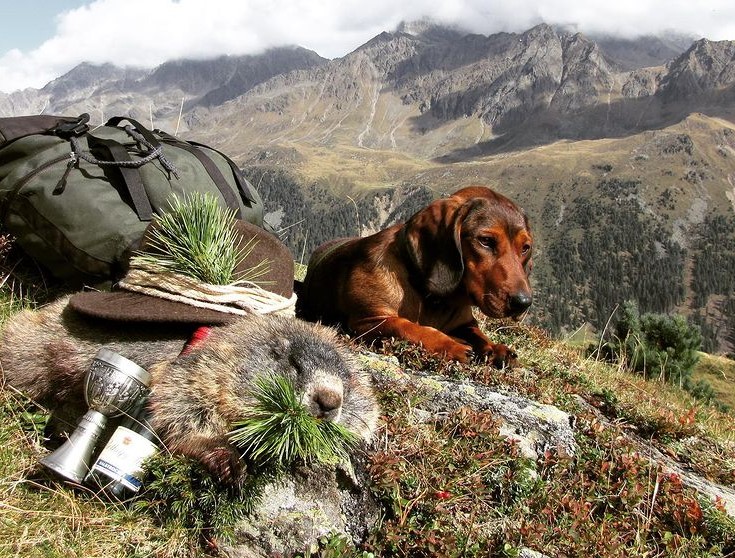 In Austria and Germany, the breed is very popular as a small, comfortable working dog that is great for mountainous areas. It is mainly used for hunting hares and foxes. It can also drive a large hoofed animal and a wild boar, find wounded animals on a blood trail.

Alpine Dachsbracke is a strong and hardy working dog of a mountain hunter. It is used for rutting and searching for ungulates, hares, foxes.

The Alpine Dachsbracke has a dashing and fearless demeanor. Shows good results both alone and working in a pack. If desired, she can be taught to find and bring a bird. 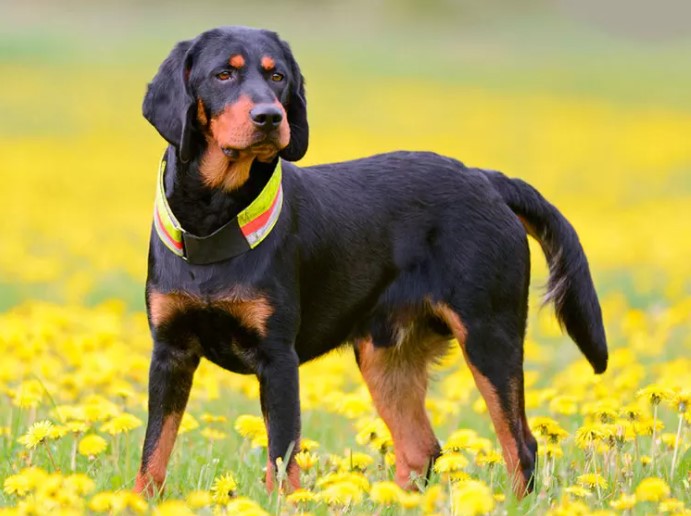 The Alpine Dachsbracke is a small stocky dog ​​of elongated format with an elongated head, long drooping ears, strong legs, and a thick tail. Unlike the Dachshund, it has a straight-set of limbs.

The head is proportional to the body. The eyes are round, large, expressive. The nose is large with wide-open nostrils. Scissor bite. The muzzle is strongly elongated with a slightly receding hairline on the bridge of the nose. The ears are drooping, large, the tips are rounded. The neck is of medium length and has noticeable leathery folds.

The body is stretched, the length is noticeably longer than the height. The back is straight. The croup is not pronounced. The abdomen is slightly tucked up, dry. The tail is saber-shaped, set high. The limbs are short, straight, strong. Paws are large with well-knit toes. The coat is dense, very thick, hard. On hind legs, neck, and tail, noticeably longer, forms feathering. Colors: 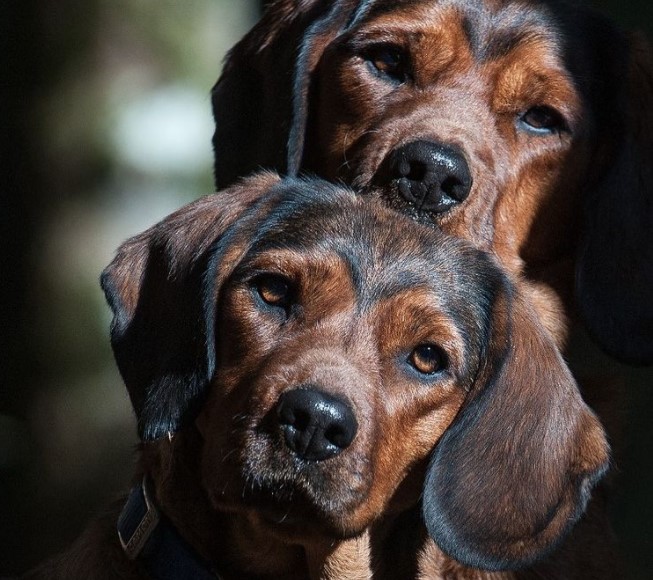 The character and temperament of Alpine Dachsbracke are as strong as the body. This is a brave and fearless working dog with hunting instincts fixed at the genetic level. She is also a wonderful companion and watchdog. Characteristic features include courage and independence. At home, the Hound behaves quite calmly but quickly revives in anticipation of a walk or departure to the grounds.

The Alpine Dachsbracke shows a frank and touching affection for all family members but is quite independent. Not prone to aggression. It gets along with other pets. During training and education, she is responsive, but at times very stubborn. One can speak of excellent controllability only if the dog is trained competently from an early age and reinforcing skills throughout his life. 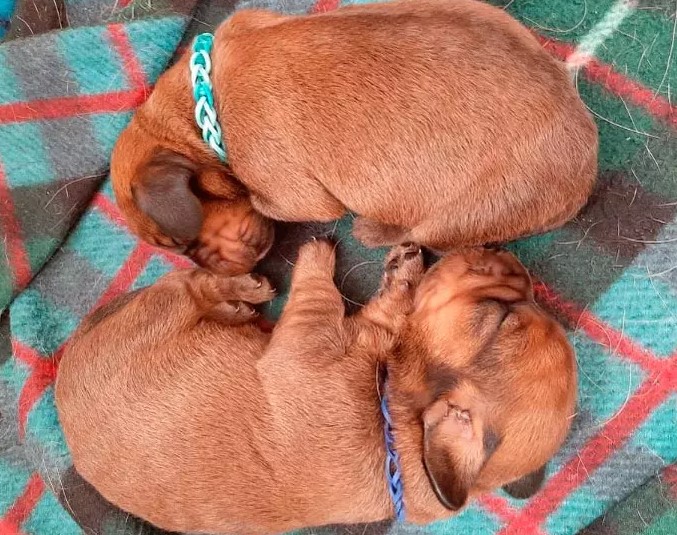 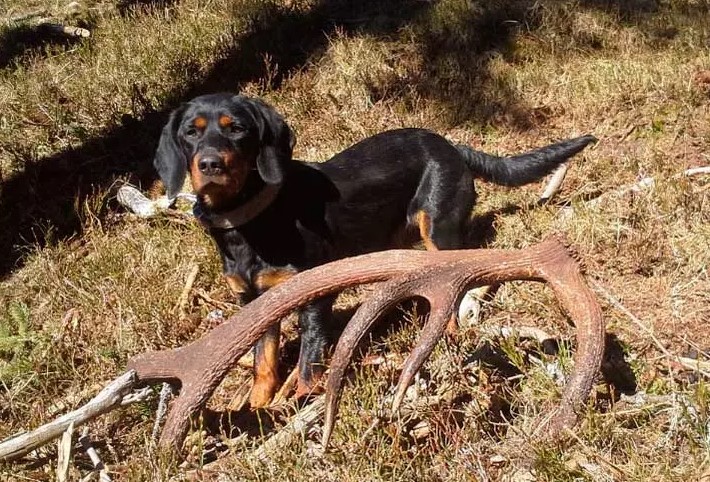 The Alpine Dachsbracke is a relatively prosperous breed. A predisposition to ear infections is noted. Sometimes there are back problems and spinal diseases associated with an elongated shape of the body. Until the puppy is fully grown, owners should limit his jumping and move up the stairs, as well as add mineral supplements to the food. Life expectancy is 10-12 years.