The American Bobtail is a hearty, short-tailed cat. Their body is Moderately long and substantial boning and stocky with a rectangular stance. American bobtail looks like a heavy and powerful cat with a strong muscular and athletic appearance. Their torso is full and broad. The medium-sized legs perfectly complement, the torso displaying strong bones & powerful muscles. They have slightly higher hips with prominent shoulder blades. 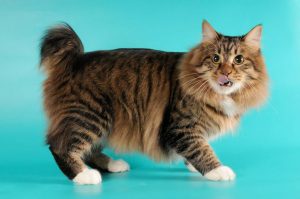 American Bobtails head is a broad wedge without flat planes and size proportionate to the body. Their cheekbones are apparent. The eyes are large, almond-shaped, and alert. They are spaced quite wide apart and are deep-set on their broad face. In profile, they have a slightly concave curve from nose to brow, or rise to prominent brow, with a good length between their brow and ears. Their brow distinctive, evidenced by a slightly rounded forehead to their big eye ridge that gives it a look of an attentive hunter. Their nose is sloped wide and a well-developed jaw and chin.

Ears of medium length set wide and inclined forward. The neck is strong, well-muscled, and may appear short because of this. The legs are heavy, muscular, the hind legs are slightly longer than the front, the legs are large and round, tufts of hair are desirable between the toes. The tail resembles a tassel. The American Bobtail is available in Shorthaired and Semi-Longhaired. The former have short, springy hair, soft undercoat. The latter have shaggy, medium-length wool, soft undercoat. Coat color – any.