The American Hairless Terrier is a relatively young dog breed that is rapidly gaining popularity. Hairless Terriers are very sociable, friendly, energetic and playful, easy to train, and suitable for a variety of sports, and their skin feels like velvet. 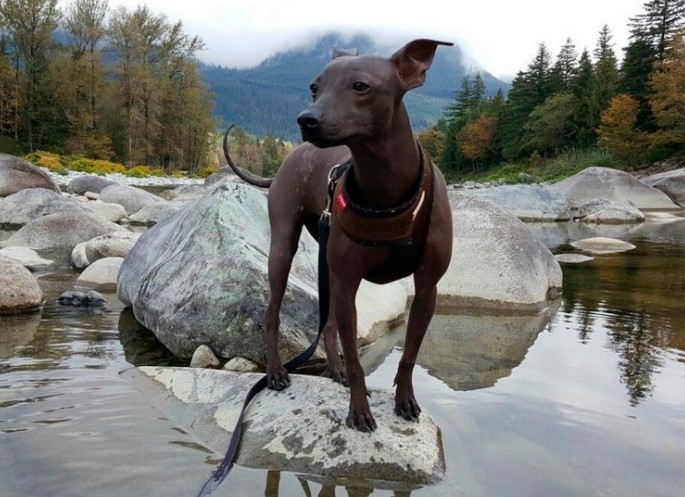 The American Hairless Terrier is one of the few breeds that has not only a founder but also an official date of birth. The first representative of Hairless Terriers was born in 1972. It was a puppy in a litter of purebred Rat Terriers. It was donated to Edwin Scott from the small town of Trout in Louisiana. Cases of the birth of hairless puppies in a pair of Rat Terriers happened before, they were considered as a consequence of a genetic mutation, but no one paid special attention to such dogs. Edwin Scott and his family appreciated the benefits of caring for a hairless pet and became interested in the idea of ​​having offspring from it. Even the lack of cynological and even more selective breeding experience did not become an obstacle.

Soon, Edwin Scott created a kennel called Trout Creek Kennel and began to popularize the breed. Interest in the breed grew, even more, when it began to be viewed as hypoallergenic. In 1998, the American Hairless Terrier was recognized by the American Rare Breed Association and the National Rat Terrier Club.

In January 1999, the hairless dogs were listed on the United Kennel Club (UKC) register as a Hairless Rat Terrier. The Terrier became an independent breed only in 2004. 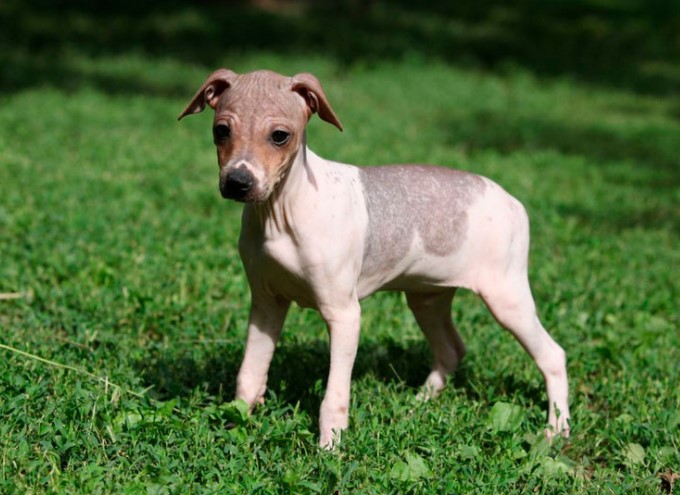 The American Hairless Terrier is a small to medium-sized dog with well-developed, but not prominent muscles, very energetic and agile. There are two varieties in the breed: naked and wool. The ideal height at the withers is 30-40 cm, weight is 5.5-7.5 kg.

The skull and muzzle are of the same length. The stop is moderate. The muzzle tapers towards the nose, well filled under the eyes. The jaw is powerful with muscular cheeks. Lips dry, fit tightly to the jaws. The nose is black or light in solid color with black edging in the same tone as the lips and eyelids. The eyes are expressive, slightly oblique, rounded, of medium size. The color must match the color, ranging from dark brown to amber-nutty. Blue eyes can only be found in fawns or blue dogs. Complete set of white teeth. Scissor bite, the straight bite is also allowed. The ears are V-shaped, set on the outer edge of the skull, and erect.

The neck is of moderate length, slightly curved, tapering from the shoulders to the head. The backbone is medium, not thin, but not too coarse. Slightly stretched body. The loin is slightly sloping, slightly curved. The croup is moderately sloping. The chest drops to or slightly below the elbows, of moderate width, deep. The back is strong and straight. The tail reaches the hock, tapers towards the tip, carried curved, but not in a ring. Legs are straight, strong, and well angulated. Feet are oval, compact.

All puppies are born with wool. By the age of 8-10 weeks, Hairless dogs completely lose their coat with the exception of the whiskers and eyelashes.

According to the type of coat, dogs are divided into two types:

Any color is allowed in any combination with the exception of merle and albinos. Skin color is very different in winter and summer when the dog is tanning. 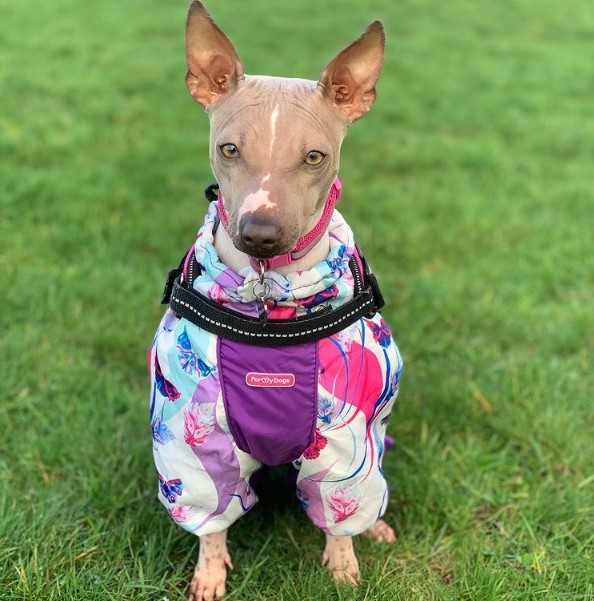 These hairless small dogs have a truly terrier character, they are very impulsive, cheerful, jumpy, and energetic. Many have a pronounced hunting instinct, which came from their ancestors – Rat Terriers. However, in view of their insecurity for hunting, they are unsuitable. This fact does not prevent dogs from showing their talents in everyday life. They are happy to hunt small animals and have a weakness for various burrows and love to dig.

Vigilance and territoriality make them good watchmen, who will always notify the owners of the arrival of guests with loud barks. They are wary of strangers, friendly with guests. Aggression towards people is not typical for the breed. They love the owner and family members immensely, always try to be near, take part in all household chores, and do not miss the opportunity to crouch or curl up on their feet like cats. Well suited for single people of any age and for families with older children who will respect a small dog, become her friend and companion in games. On walks, they are energetic and playful, but with a good upbringing, they are quite obedient and try to stay close.

The American Hairless Terrier gets along remarkably well with dogs of different breeds from miniature to gigantic, gets along peacefully with cats, does not touch birds and rodents, in rare cases there are exceptions. And, of course, a lot depends on the socialization and growing conditions of the dog. 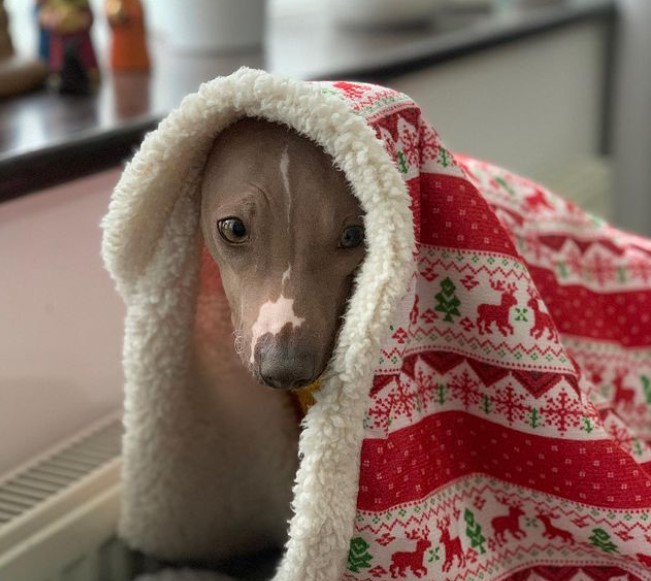 Grooming for the American Hairless Terrier is easy. It is enough to redeem the dogs once a week and wipe them dry with a towel after washing. In summer, the skin dries up from ultraviolet radiation and often requires additional moisture. In addition, light-colored dogs are recommended to be lubricated with baby sunscreen to minimize the risk of sunburn. Once a week, you also need to examine the ears for dirt and clean them if necessary and trim the claws to the optimal length every 3-4 weeks. Woolly dogs are periodically combed with a brush. Molting is very weak.

It is recommended to brush your dog’s teeth, it is a good prevention of tartar and other dental problems. But it is worth noting that, unlike other hairless breeds, the hairlessness of the American Terrier is not associated with incomplete teeth, early tooth loss, or other problems.

When the puppies turn 3 months old, the ears are fixed in a standing position for several months, they may not stand up on their own, not rise completely or incorrectly. 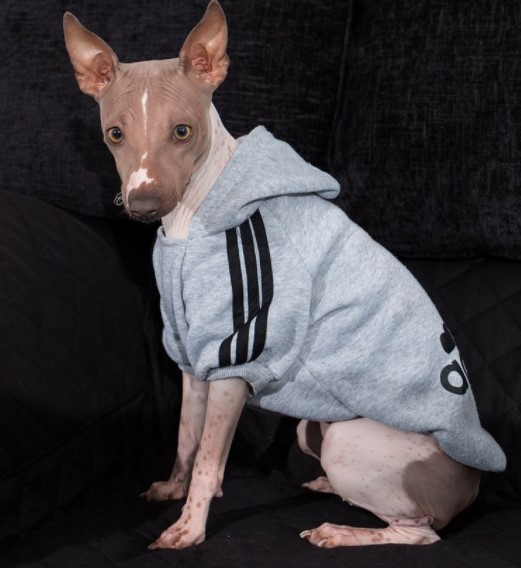 The gene that is responsible for the lack of hair in American Hairless Terrier is recessive, unlike the dominant gene found in other hairless breeds, it is not associated with lethal defects, incomplete dental formula, other genetic diseases, and defects. This greatly improves the health and stamina of young Hairless dogs. But, unfortunately, one cannot say that the breed is completely healthy. To date, hereditary diseases are recorded in it, which occur with different frequencies in different lines:

Life expectancy is usually 13-15 years. It is advisable to undergo a complete physical examination annually. It is also important to adhere to the vaccination schedule. Treat the dog regularly for external and internal parasites. Hairless Terriers do not suffer from fleas and lice, but they are a tasty morsel for ticks and mosquitoes, which are carriers of dangerous diseases, such as toxoplasmosis and dirofilariasis.