During the First World War, this brave dog was the favorite of the American nation and a symbol of the country. But just like his descendant and closest relative, the American Pit Bull (with whom he is still often confused), at the end of the 20th century, the American Staffordshire Terrier was persecuted in different countries by people and the media, who considered him a bloody killer and demanded to destroy the breed … Stafford was born in the 19th century in the English county of Staffordshire (his ancestors were the English Bulldog and Terrier), and a few decades later the dog came to America, where its “updated”, larger variety was bred and a new stage began in breeding the breed. During this time, dogfighting of American Staffordshire Terriers became very popular. By the way, before getting its current name, as soon as this dog was not called: and a pit dog, and a Yankee terrier, and an American pit bull terrier. 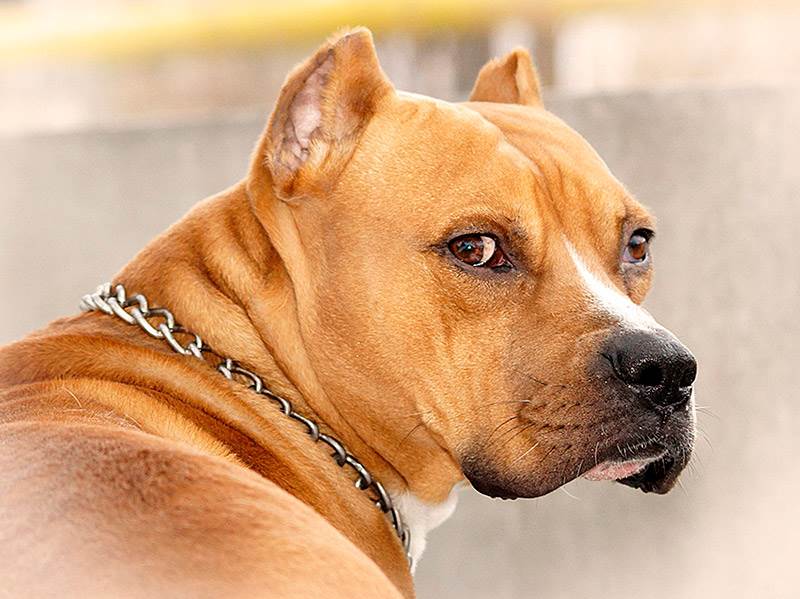 But in 1936, the breed was officially recognized by the American Kennel Club as the Staffordshire Terrier, and in 1972 the dog has renamed the American Staffordshire Terrier and finally “separated” from its related pit bull and from its bloody past. But the reputation is built over the years and deteriorates in an instant, therefore, in many countries, the breeding of Amstaffs that fall under the law on dangerous animals is under strict state control or even prohibited. In fact, if you set a goal, you can make almost any dog ​​vicious and aggressive and it is wrong and incorrect to accuse a particular breed of aggression. Of course, a breed originally bred as a fighting breed cannot, by definition, be “white and fluffy”. But if you use the unique qualities of the amstaff for peaceful purposes, then he will become an ideal domestic dog and a devoted protector of the family. The American Staffordshire Terrier is a stocky, incredibly strong, and harmoniously built dog, its body seems to be sculpted from muscles tightly covered with skin. A deep chest, widely spaced limbs, a large head and strong jaws with a powerful grip give it a fearless fighter who is always on the alert. In addition, amstaff almost does not feel pain. Amstaff loves to play with children: he himself is a very playful creature and is patient with their children’s pranks, so children usually sit on his neck (both literally and figuratively). And in general, this dog is not easy to piss off – he has a very high threshold of irritability and he is always balanced. He will only really get angry if he is really forced to do it. Stafford is a dog of contrasts. This dog, for example, can quickly change mood: from a phlegmatic state, he can easily turn playful, become incredibly energetic, and even cocky. Thanks to its high intelligence, this dog is perfectly trainable and grasps everything on the fly. The Staffordshire Terrier will reliably protect you and your home from uninvited guests – the protective instinct is inherent in it by nature (it is not without reason that it is considered one of the best protectors among dogs). In addition, the American Staffordshire Terrier has the unique ability to intuitively sense danger. This dog is boundlessly, simply devoted to the owner to the point of fanaticism, he always watches him closely and in every possible way tries to evoke positive emotions in him, for example, he can tenderly cuddle up to him and make a touching grimace. However, all the owners of these dogs are also crazy about their pets and believe that love for this dog is love at first sight and forever.

When buying an American Staffordshire Terrier puppy, the first step is to clearly define what you need a puppy for. Do you have a dog for exhibitions, breeding, or just as a pet? The criteria for evaluating the puppy and its cost will depend on this. When choosing a champion puppy or a sire, carefully read the breed standard, ask the seller for documents confirming the puppy’s pedigree. Better to go to the breeder with an experienced specialist who will help you make the right choice. If you start a Stafford as a guard and protector, choose producers with a strong balanced psyche. Aggressive dogs, if improperly educated, can become dangerous to the health of the owner himself. It is recommended to take a young puppy about 2 months old as a bodyguard-dog. At this age, puppies are best trained. You can, of course, take an adult dog that has already passed the necessary training course. However, in this case, you need to understand that such a dog has already formed character and habits, and therefore may sometimes not obey you, or will not get along with you at all. As for the [email protected] of the animal, a novice dog breeder is advised to opt for a bitch. They are more trainable and less dominant than males. In addition, bitches become more attached to the owner. The disadvantage of bitches is their physiological features such as estrus. During this period, the owner will need to pay more attention to the pet while walking in order to prevent an “unwanted” pregnancy. But the problem of stained carpets and armchairs is solved with ordinary panties. The Staffordshire Terrier male is more aggressive, active, and independent. You will have to spend much more time and effort on raising and training a dog. In addition, males mark everything around them, sniff unfamiliar objects, animals, and people on the street.

Dogs of this breed are distinguished by good health and do not have bad heredity. With proper care, you are unlikely to experience disease in the American Staffordshire Terrier. The smooth Stafford coat requires little maintenance. All necessary procedures are regular brushing of the coat and bathing as needed. Always check your pet’s skin for irritation and wounds before washing. If, after bathing, an unpleasant odor emanates from the dog, you should contact your veterinarian, as this most likely indicates the presence of a disease. The American Staffordshire Terrier is a dog that needs regular exercise. Try to spend as much time with your pet as possible outdoors, doing active games or training. 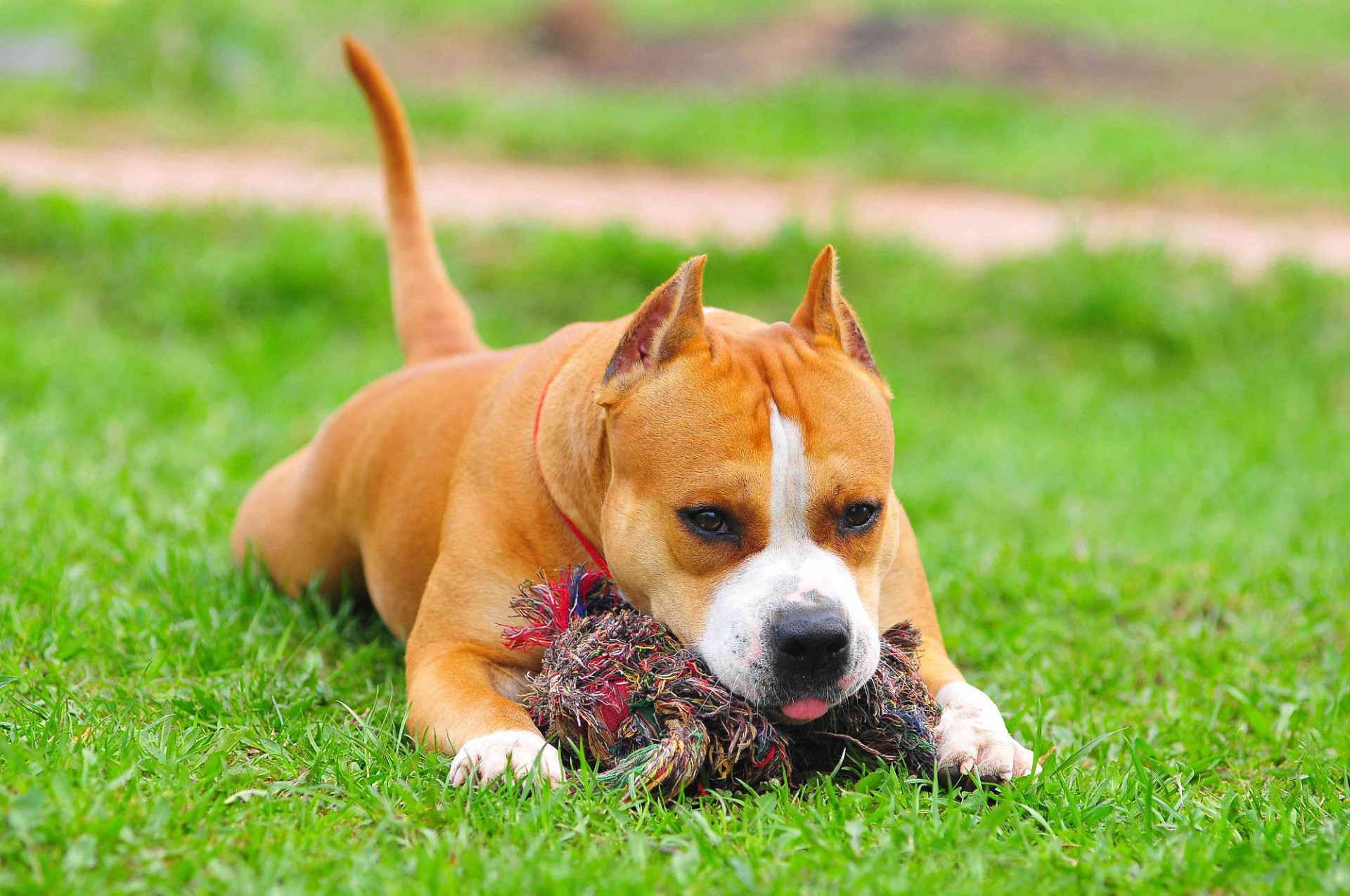 The behavior of an adult dog directly depends on the upbringing and skills acquired in childhood. The widespread belief that a puppy can grow up to 1-year old without any training is wrong! It is between the ages of 1.5 and 6 months that dogs are best trained. An important point in the upbringing of the American Staffordshire Terrier is its socialization. Dogs of this breed are very aggressive towards other animals and strangers, therefore it is necessary to accustom them to the world around them from childhood. Having withstood quarantine after the first vaccination, start taking your puppy outside, walk with him in crowded places, along busy streets, transport him in public transport and in a car. Educate your puppy for other animals, but avoid contact with aggressive and insecure dogs. Any attempts to display aggression must be stopped in the bud, even in a cute little puppy. Otherwise, in the future, it will be quite difficult for you to stop the aggression of an adult dog, incredibly strong and with full mouths of teeth. Many staff like to sleep on a bed or sofa. It is important from the very beginning to explain to the young Amstafford that this is possible only with the permission of the owner or not at all. Thus, you let the dog know that you are the “leader”, thereby deciding the necessary hierarchical aspects of your communication with the pet. Basic rules for Amstafford owners: firmness, gradualness, and consistency. The pet must firmly know that it is impossible not to follow the commands, and any attempt to take the place of the “leader of the pack” is doomed to failure in advance. The American Staffordshire Terrier is a dog that requires serious training. If you have no experience in dog training, be sure to seek help from a professional trainer in order to avoid possible disastrous consequences.