Various species of snails stand out among the aquatic organisms. Most often, representatives of the Gastropoda class are found in aquariums. Some of them are considered weedy because, multiplying uncontrollably, they create additional biological load on the aquarium and spoil the aesthetics. However, there are snails that are not only useful but also a real decoration for any aquarium. And ampullary is undoubtedly the most important of them.

Ampularia is a group of the most common and popular aquarium snails. They are distinguished by their bright color, unpretentious maintenance and are useful in the aquarium, eating food leftover from fish, as well as clearing the walls of algae.

Currently, the following types of ampullary are most often found: Pomacea bridges, Pomacea maculata, Pomacea canaliculata, and Pomacea paludosa. In English-speaking countries, the ampullary is called “Snail-Apple” (snail-apple). The gastropods received such an interesting name for the similarity of the color of the rounded shell with some varieties of apples.

The homeland of the ampullary is South America. In 1904, the first specimens were delivered to Germany, and after a few years, they were widely distributed among aquarists around the world.

Ampularia is large snails, some specimens are capable of growing up to 10 cm. In nature, they have adapted to life in reservoirs with a low oxygen concentration. These mollusks have adapted to breathing both oxygen dissolved in water and atmospheric air, for which they periodically stick out a long breathing tube – a siphon – from the water. Its length can reach 12 cm. This feature allows snails to store oxygen with minimal risk of being eaten by a predator.

It is important to remember that even despite the presence of gills, the ampullary periodically needs to breathe atmospheric air, otherwise the snail will quickly die. In aquariums, this can be observed when mollusks are kept with large or active fish, which prevent the ampullae from crawling to the surface. 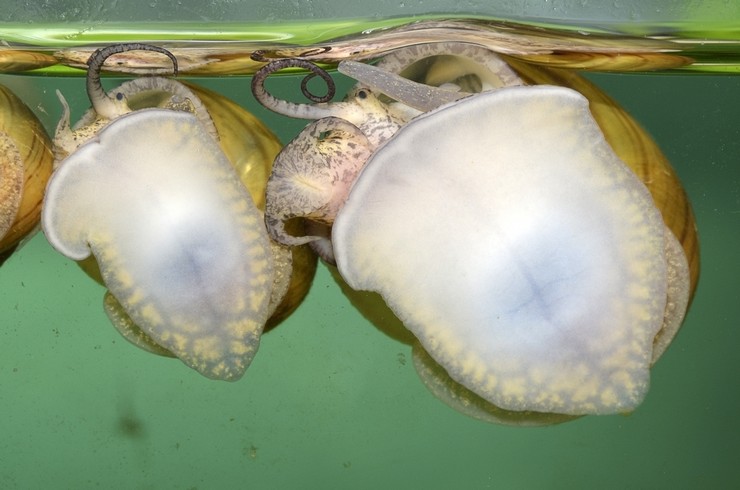 Finally, another important survival device is the shell mouth cover. This is a dark corneous plate, which the mollusk is able to close tightly. In this position, in a humid environment, ampullary are able to stay long enough until conditions return to normal. Of course, this behavior is not observed in an aquarium. Also, the cover protects well from enemies.

The ability of the ampullary to regenerate is striking. The bitten organ usually recovers within a month.

Some people are afraid to get ampullary after learning that in nature this species is an intermediate host for some roundworms. It should be noted that in snails bred at home, such a parasite simply cannot exist, because contact with the main carriers – wild rats – is excluded. And in order to get infected, a raw snail still needs to be eaten.

You can often hear unusual stories that ampullary are able to hunt and eat fish. But these are just legends. The unhurried and overweight snail is hardly capable of catching up or grabbing a fish passing by. Most likely, these stories are based on the fact that ampulla is often found on dead fish in an aquarium. However, ampullary feed on the dead remains of already dead fish; these mollusks do not hunt.

Ampularia has a curled shell, its color depends on the specific color variation. In its normal state, a mollusk has a wide “leg” sticking out from under the shell, with the help of which the snail moves along surfaces, including vertical ones. The organs of touch are the tentacles. Eyes with thin legs are yellow-golden in color. In addition to touch, the snail has a well-developed sense of smell, which allows it to accurately find food.

The sink is equipped with a lid called the operculum. In case of danger, the snail hides in the shell and covers its mouth with a lid. This allows you to endure adverse environmental conditions or the attack of predators.

The color of the shells is very diverse. The most popular are clams with a yellow shell. Recently, you can find blue, white, and even almost black snails. The classic color option is considered to be striped: an alternation of dark and light stripes on the shell. 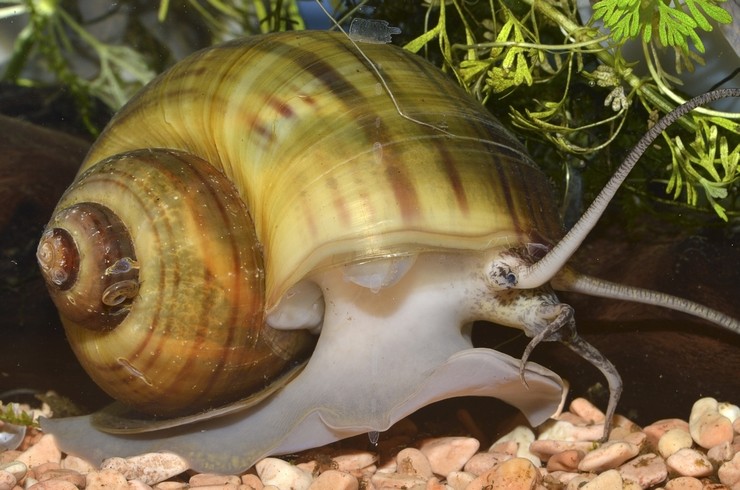 The lifespan of the ampullary directly depends on the temperature of the water in the aquarium. At high temperatures, ampullary increases activity increases growth and accelerates the reproduction of their own kind. However, the accelerated metabolism also has disadvantages: the lifespan is shortened.

When the snail is kept in the temperature range of 18-25 ° C, the lifespan can reach 3-5 years. In warm water, usually no more than one and a half years.

Sexual dimorphism is not pronounced; it is very difficult to distinguish a female from a male. A proven way to find a pair is to catch two snails mating.

It is possible to keep ampullary both in a separate species aquarium and together with most species of peaceful tropical fish.

Ampularia is large snails, so it is advisable that at least 10 liters of water per adult. Therefore, for the separate keeping of shellfish, it is better to stay on aquariums from 40 liters.

An aquarium for ampullary must be equipped with a lid and not have large technological holes. Snails, especially females in search of a place for laying, are able to crawl out of the aquarium, and for them, it usually ends in failure – ampullae fall to the floor and dry out if they are not found in time. The maximum time they are able to survive without water is about a day. Falling from a height can also injure the sink. 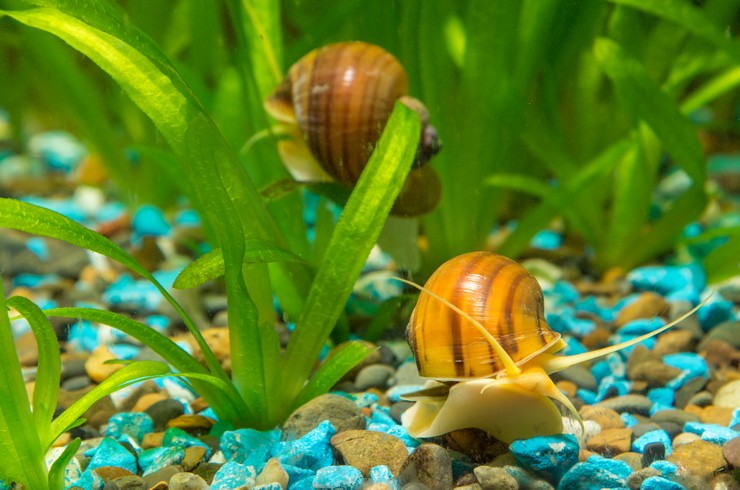 It is very important to organize powerful filtration in an aquarium with an ampullary. Snails are quite voracious and leave behind a lot of waste. To prevent the water from turning into a swamp, install a powerful filter and regularly make water changes with a soil siphon. A compressor is also needed for additional aeration because ampullary breath mainly oxygen dissolved in water.

The best soil to use is sandy or rounded pebbles so that the snails do not damage their soft tissues. When choosing plants, it is best to stop at hard-leaved species: Anubias, Cryptocorynes, Giant Vallisneria. Ampularia is omnivorous snails. And despite the fact that, first of all, they will pay attention to the food of animal origin, with insufficient nutrition, they can easily begin to eat the delicate leaves of plants.

At low temperatures, metabolism slows down in the ampullary, and they spend most of their time in hibernation. In warm water, snails, on the contrary, are very active, but their lifespan is noticeably reduced.

Ampularia should not be kept in very soft water, because they need calcium to build a shell. Therefore, having discovered the destruction of shells in mollusks, you should pay attention to the hardness of the water. Ampularia is able to tolerate a slight increase in salinity if the salt concentration increases gradually. 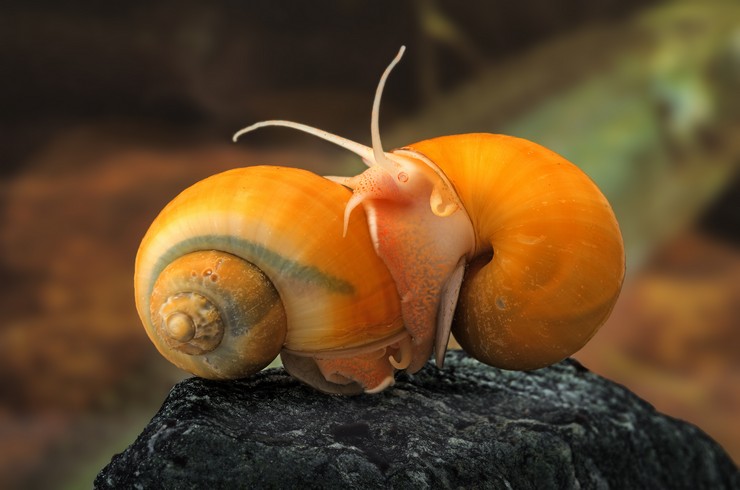 Sometimes, for one reason or another, ampullae die. It is advisable to remove dead snails from the aquarium as soon as possible so that they do not degrade the water quality. It is not difficult to identify a dead mollusk, their muscles relax and cannot keep the shell lid closed. Also, do not rush to throw out the snail if it has surfaced, often it is simply pushed out by the air accumulated in the sink after the next replenishment of oxygen with the help of a siphon.

Ampularia is excellent roommates because they are not capable of harming any fish. But many fish very often disturb leisurely mollusks.