In English-speaking countries, the scalar (Pterophyllum sp.) Is called “angelfish” – angelfish. Their unusual body shape and dignified slowness have won the hearts of many aquarists. The genus name consists of two Greek words “pros” – wing and “phylum” – leaf. Scalars belong to the Tsichlov family, all representatives live in South America.

According to the modern classification, there are three types of scalars:

Common scalar (Pterophyllum scalare) is a classic form of scalar, natural silver color with characteristic transverse stripes (usually there are 4 of them).

Scalaria Altum (Pterophyllum Altum) – has a very elongated body and fins, the size of some individuals reaches 50 cm in height;

The Leopold scalar (Pterophyllum Leopoldi) is one of the smaller species of scalar, a characteristic feature is a large black spot under the dorsal fin.

Various color variations have been developed over the years. The latter was bred genetically modified GLO scalars, containing genes of marine coelenterates and possessing a bright, fluorescent color. 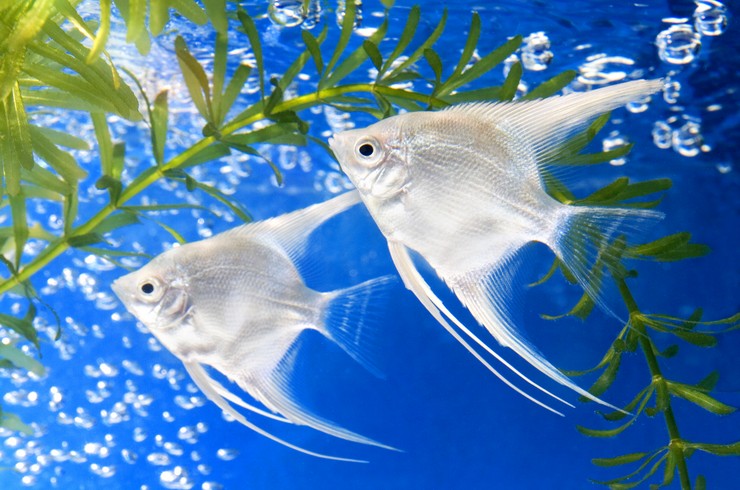 The homeland of the scalar is South America. The fish is widespread in the Amazon and its tributaries in Brazil, Ecuador, and Peru. Scalarians prefer slow-flowing bodies of water. The flattened body shape allows them to easily maneuver among the thickets of underwater plants, and the vertical dark stripes make them less visible to predators. In nature, scalars usually flock into small flocks of up to 10 individuals. The reservoirs in which the scalar live are characterized by warm, soft, and slightly acidic water, therefore, similar conditions should be created in an aquarium with these beautiful fish.

The first description of the common scalar dates back to 1823 when the zoologist Martin Heinrich Karl Lichtenstein described the fish as Zeus Scalaris. After 8 years, already the French scientist Georges Cuvier also described the scalar (possibly the same as his colleague) and gave it the species name Platax Scalaris. The same genera also included marine fish, very similar to the scalar.

But in 1840, the famous Austrian zoologist Heckel singled out freshwater scalar in a separate genus, which he gave the name Pterophyllum, which in Latin means “winged leaf”.

The specific epithet “scalare” is translated as “ladder”. It is still not known for certain whether the fish got its name from the stripes on the dorsal fin, which climb up like a ladder or simply from the striped color of the body.

The first reliable data on live scalars brought to Europe date back to 1911. Until this time, all attempts to bring fish ended in failure. Initially, the fish was sold under the commercial name “Blattfische” (“leaf fish”), a little later the fish began to be called “Angelfish” because of the similarity of elongated fins to angel wings. This name has survived to our time.

The first offspring from scalar in artificial conditions were obtained in 1914 by the German aquarist Josef Kwankar. A little later, his success was repeated by Ulyam Pauline from Philadelphia (USA). The features of the successful breeding of scalars were kept secret for a long time, which made it possible to keep the high cost of fish. But by 1920, all the covers were removed and the mass breeding of scalars began.

The first veiled scalar was produced in 1956, and the velvet black one a year later. 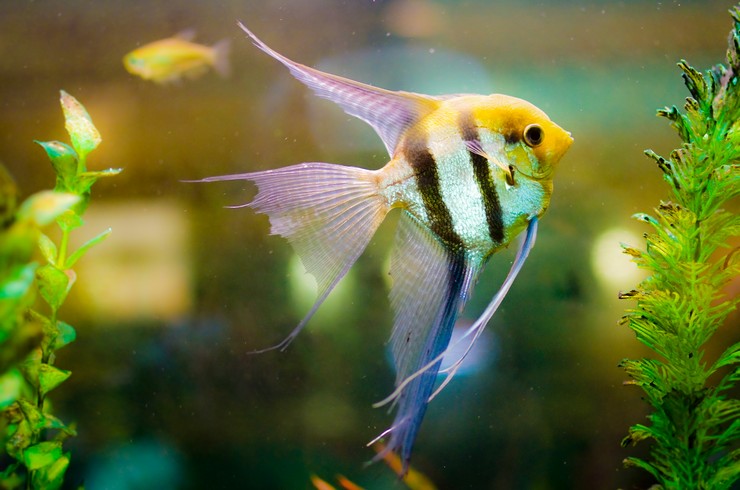 In 1963, a third species was described, Pterophyllum Leopoldi, named after the king and zoologist Leopold III.

In modern aquarium culture, you can find a large number of varieties of scalars, differing in color, size, and shape of fins.

To keep most varieties of scalars, an aquarium of 100 liters per pair is required. It is desirable that the height of the container is at least 50 cm. The maximum size of individuals directly depends on the volume of water. It is best to keep these active and sufficiently mobile fish in a school of 6 or more. Scalarians have a rigid hierarchy in the pack, usually, one pair dominates, which actively shows their superiority over others, periodically arranging skirmishes. The soil is fine pebbles or coarse sand, suitable for growing live plants. It is recommended to create zones with dense vegetation, aquarium scalars, like their natural relatives, can swim in dense thickets without problems, and also hide down in case of danger (for example, to avoid the aggression of other individuals). Natural driftwood or grottoes can be placed on the ground. A positive feature of the content of scalars is that they do not dig soil and practically do not damage living plants. 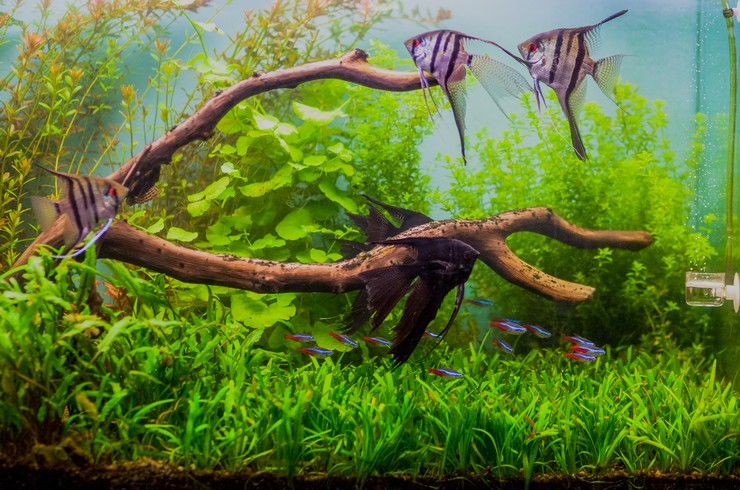 Scalarians love clean, oxygen-rich water, so good filtration and aeration of the aquarium will not be superfluous. For this purpose, it is best to use external filters and efficient compressors. Scalarians tolerate bright lighting well, so it must be matched to the needs of the grown plants.

Scalars are tropical fish, it is desirable that the water temperature does not drop below 24 ° C. The fish are not picky about the hardness of the water and can easily adapt to almost any value. Optimum parameters are 5-15 dGH. It is best if the water in the aquarium is slightly acidic or neutral (pH = 6.5-7.5). Do not forget about weekly water changes in the amount of 25-30% of the volume of the aquarium.

Poor conditions of detention, of course, will lead to a loss of color intensity of the scalar, the body will become faded, the characteristic shine will disappear. 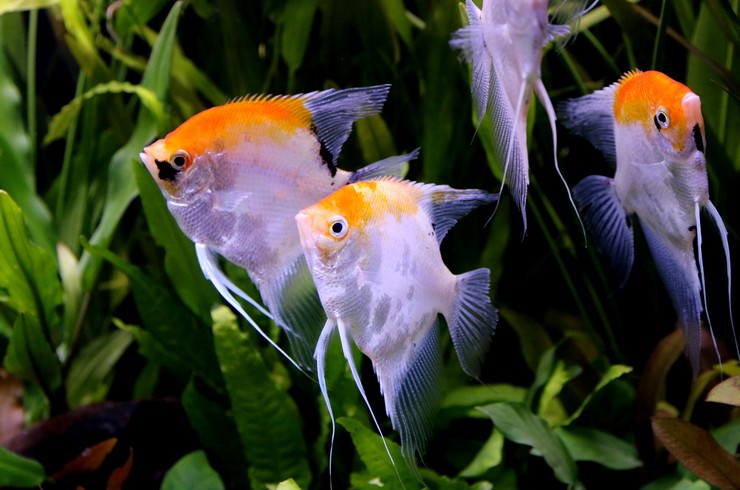