Nothing is nicer than discovering nature with your own four-legged friend! Unless the walk turns into a nerve-wracking gauntlet. At the latest when the hunting instinct becomes an uncontrollable problem and no wild animal is safe from the dog, the so-called “anti-hunting training” for dogs comes into play. But can one turn off the urge entirely? Pettime presents four useful tips that will help you take a relaxing walk.

Anti-Hunting Training For Dogs – Why Do Dogs Hunt? 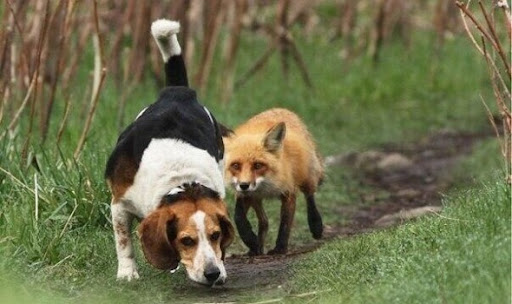 In the wild, for predators, hunting means survival. But unlike their ancestors – the wolves – dogs with homes do not have to take care of their own food. Dogs with a family are given a full bowl once or twice a day, with treats being added occasionally. If it’s not about survival, then what’s behind the behavior? The first reason for chasing after and scaring away prey is simple:

Many dogs find the baiting of wild animals a lot of fun.

Incidentally, playing ball is also linked to the instinct to pursue “prey”. Chasing mice, rabbits and the like doesn’t always have a reason to hunt for food – it’s a kind of game.

In the second place, there are dogs that actually hunt – despite a well-protected home. They run after the prey to simply kill it. Dogs that have been left to their own devices in the past are particularly prone to this behavior. Dogs that have a strong hunting instinct due to their breed also find it more difficult to resist temptation. You can read more about this in the last paragraph.

Can I Switch Off the Hunting Instinct Completely?

The hunting instinct triggers feelings of happiness in four-legged friends as soon as it is pursued. Countless endorphins rush through the body. It’s a kind of self-reward. Once a dog has hunted, it will use every opportunity in the future to reward itself. Unless the person intervenes in the form of consistent training. But to what extent can a dog owner prevent the behavior?

There is no switch that completely switches off the hunting instinct.

Hunting is instinctive behavior. However, the dog owner should always have an influence on how their own four-legged friend deals with game encounters, i.e. whether he pursues the hunting instinct or not. In the course of training, the dog learns that it is no longer allowed to hunt – the hunting instinct remains firmly anchored throughout its life.

First, it is important to understand the need for anti-hunting training. If a dog with a hunting instinct is not properly trained, wild animals will be frightened, injured, or even killed. This is not only unpleasant during the breeding and setting season. In addition, there are always missing cases of dogs because their hunting instinct is underestimated. Anti-hunting training is a combination of several factors. Every dog is individual and training should take this into account.

The following tips for anti-hunting training for dogs are not intended to be exhaustive. Nevertheless, they can help to keep the hunting instinct in check. Is there no improvement despite all the effort and patience? Then the advice of a dog trainer who specializes in the hunting instinct or going to a dog school makes sense.

Attract Attention on Yourself

This tip forms the basis for anti-hunting training. A dog that likes to hunt completely turns off its owner at that moment. He just runs after the prey. Before that happens, you can train him to get his attention specifically. Reward your four-legged friend when he is outside:

The classic in dog training! The important thing here is to practice calling back in different areas and hiking trails. In this way, you ensure that your dog can not only be reliably accessed in the nearby park or in your own garden. The recall is especially important in strange places, such as in a forest or in a field. It is up to the dog owner to find out to which reward their own four-legged friend reacts particularly strongly. This can be an extra tasty treat or a toy. The goal is achieved as soon as the dog realizes: It is always worthwhile to run back to my caregiver.

As long as the command does not work reliably, aids such as a tow line are used. The recall is part of basic obedience, along with other commands such as “sit”, “sit down” and “stay” and must be practiced from the start. The somewhat sobering news: If the four-legged friend is already in hunting mode, a callback can no longer do much. The feeling of happiness in the hunt trumps any kind of reward. In order to avoid this as much as possible, dog owners should always keep an eye on their fur noses when they are running freely.

Some dogs that feel under-challenged are more prone to hunting behavior. True to the motto: “If my mistress doesn’t offer me a job, I’ll look for one myself!”. Cozy dogs are absolutely happy with simple walks. Sporty four-legged friends, on the other hand, need action! Look for activities that will exercise your dog appropriately. There is no one-size-fits-all solution for everyone. Tracking or mantrailing is perfect for dogs that sniff constantly while walking. Other alternatives are:

The dog realizes: Working with my human is fun! Be interesting for your four-legged friend and he will no longer lookout for wild animals on his own.

Do Not Unconsciously Encourage the Hunting Instinct

Ball and frisbee games bring great joy to many dogs. First of all: Dog owners of four-legged friends with a pronounced hunting instinct do not need to stop playing completely. However, it is important to ensure that you remain in control throughout the game.

They learn that they can run after their “prey” faster and without any permission. And of course, that is counterproductive for anti-hunting training. So from now on, make the rules. Make it clear to your dog that he can only get the ball after permission. Start the game and finish it too. This increases the likelihood that even during a real hunt, he will turn a questioning glance at you and not run into the undergrowth at full throttle.

All dogs have a hunting instinct – only some have more and others less. As can be seen from this article, anti-hunt training is a complex matter, but it pays off. Anyone looking for an uncomplicated family dog should deal with any hunting instinct that may be present beforehand. There are undoubtedly dog breeds that are predestined to go hunting in nature. These include, for example: