Among dwarf cichlids, aquarists around the world are especially fond of the small rainbow fish native to South America – the Ramirez Apistogramma. Even the relative capriciousness of the species does not become an obstacle for those who like to keep this miniature beauty at home. How to make the Apistogramma live in your home aquarium as long as possible, read our article.

Apistogramma Ramirez (Mikrogeophagus ramirezi) is a freshwater ray-finned fish from the Tsichlov family. It is appreciated by aquarists for its incredibly beautiful iridescent body-color, peaceful nature, and modest size, which allows it to contain pictograms even in small aquariums.

The fish received its specific name in honor of the Colombian explorer of the Amazon fauna and the famous importer of aquarium fish, Manuel Vincent Ramirez, who first saw and caught it on the 1947 expedition. A year later, the cichlid received a scientific description and was assigned to the genus Apistogramma. Repeated systematic revisions in subsequent years led to the fact that the fish changed its position more than once, until, finally, in 1998, it began to belong to the genus Mikrogeophagus. But despite the battles of taxonomists, the original name stuck best among aquarists.

Ramirez’s Apistogramma is not the easiest fish to care for, but the complexity of keeping is more than offset by its striking appearance and entertaining behavior. 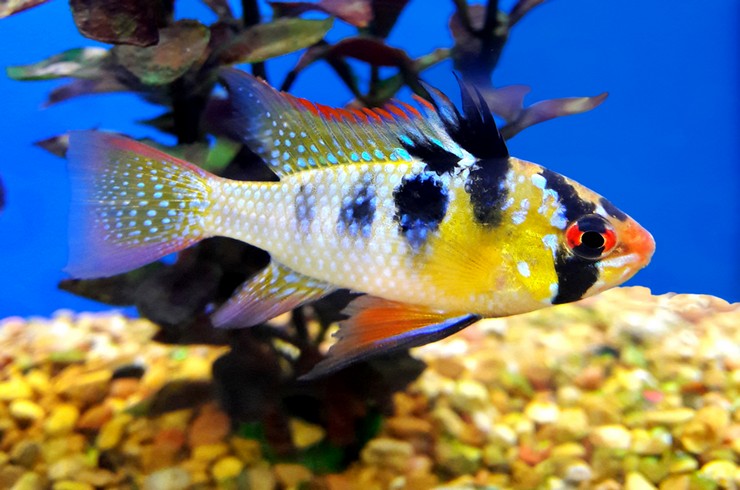 Ramirez’s Apistogramma is considered one of the most beautiful dwarf cichlids. Its color combines a number of shades. The back of the body is bright blue, the front is predominantly yellow. Separate small scales are clearly distinguishable. One or more large dark spots are located on the sides of the body closer to the head. The abdomen is pink in females and orange in males. 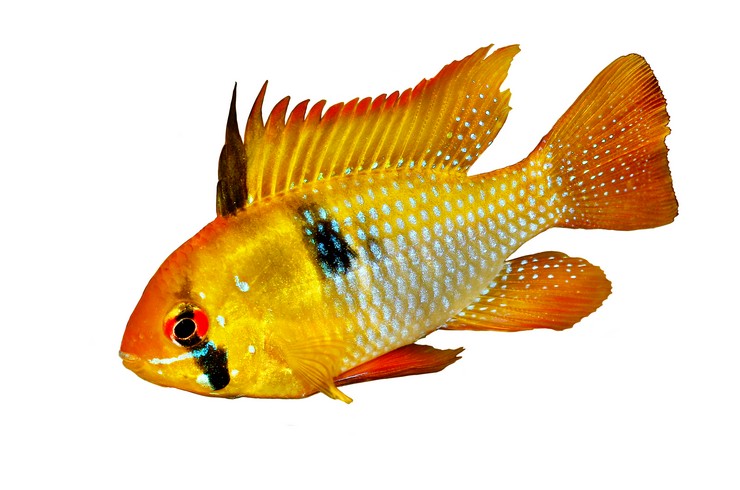 At present, several breeding forms have been obtained, such as the Ramirezi Apistogramma “Electric Blue”, balloon, golden, veiled.

Ramirez’s Apistogramma is a miniature fish, the size of which does not exceed 7 cm.

The natural area of the Ramirezi Apistogramma includes the Orinoco basin, a river flowing in Colombia and Venezuela (South America). The valleys of this river system are called “llanos” and represent a vast territory of tropical savannas, pastures, and forests with stable weather conditions, pronounced moisture seasons, and high air temperatures 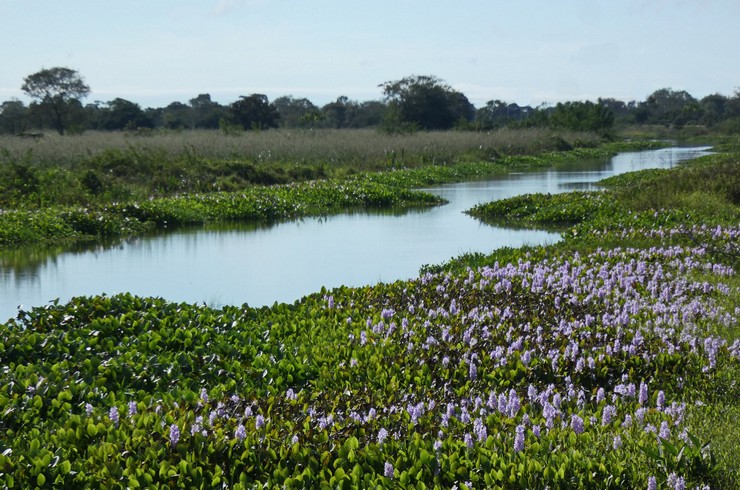 Apistograms prefer stagnant or slow-flowing bodies of water with a sandy bottom and thickets of aquatic vegetation. They keep at a depth of 10-50 cm, here the water easily warms up to 30 ° C, therefore, when keeping at home, one should not forget about the thermophilicity of these fish. The water in the natural habitats of the Apistogramma is soft and acidic, rich in humic substances.

This type of apistogram is the result of careful work of breeders. Its unique feature is that the entire body, including the fins, has a graceful bright blue coloration with a metallic sheen. Only on the head is there a small red or orange spot. The iris is red, like the parent form. The fish looks very impressive. 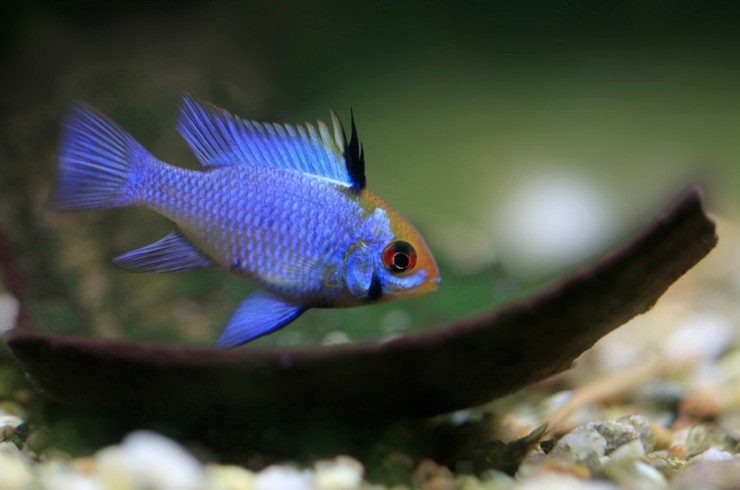 This breed is characterized by highly developed fins that follow the fish like a train. When keeping this form in the aquarium, there should be no decorations with sharp edges, about which the apistograms can damage their chic fins. 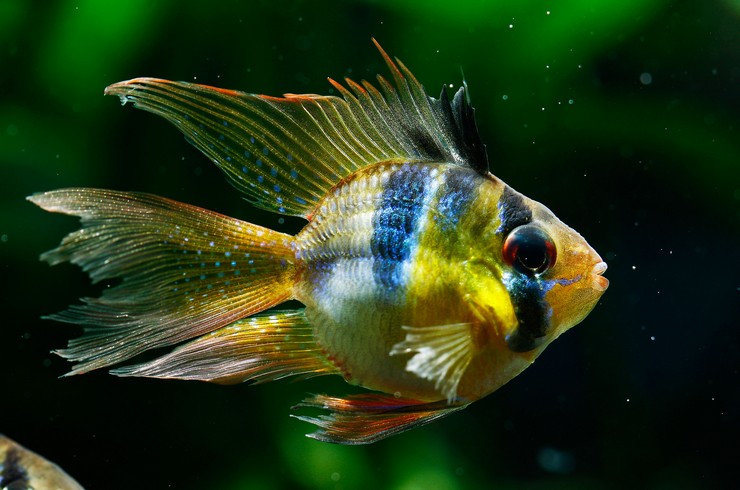 Balloons are apistograms with an almost spherical body. The appearance of the fish is interesting, but, unfortunately, such forms often have a short life span due to the displacement of the internal organs. 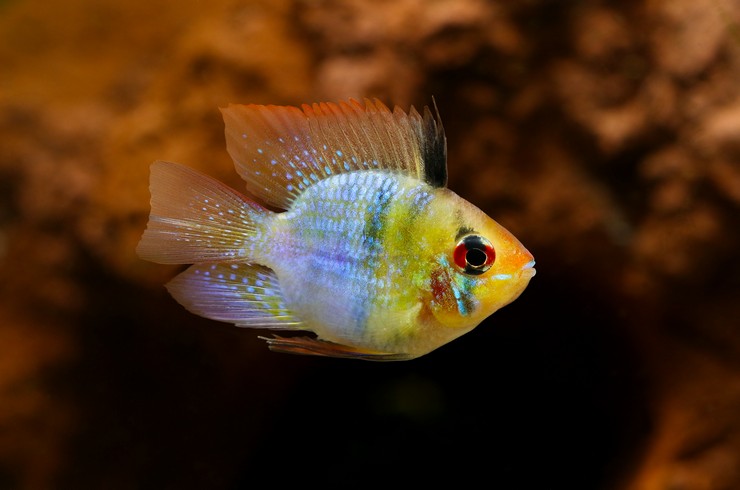 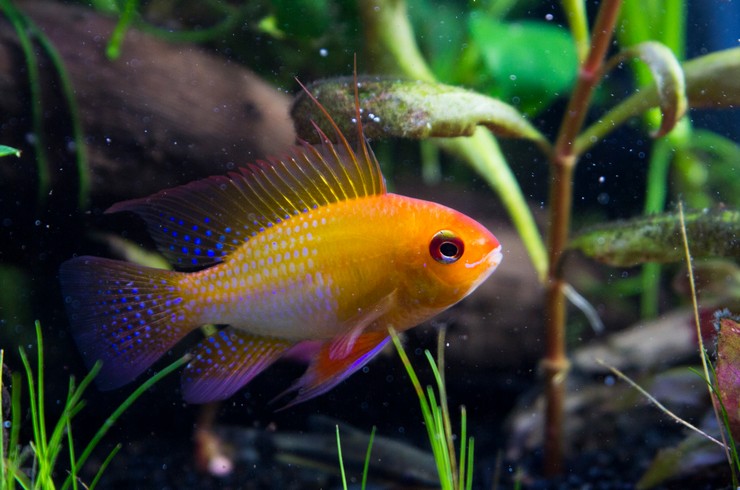 To keep a couple of apistograms, an aquarium with a volume of 40 liters will be enough. But given the sensitivity of this delicate fish to changes in water parameters, it is better to stop at containers of 60 liters or more.

These miniature cichlids will look best in nature-styled aquariums. Quartz sand is usually used as a soil. This is due to the fact that apistograms like to dig in the ground in search of food. As a decoration, you can install several natural driftwood and a couple of flat stones, which will become an excellent substrate for possible spawning. It is best to plant one part of the aquarium with live plants, in which the fish can hide if necessary, and leave the other for free swimming. 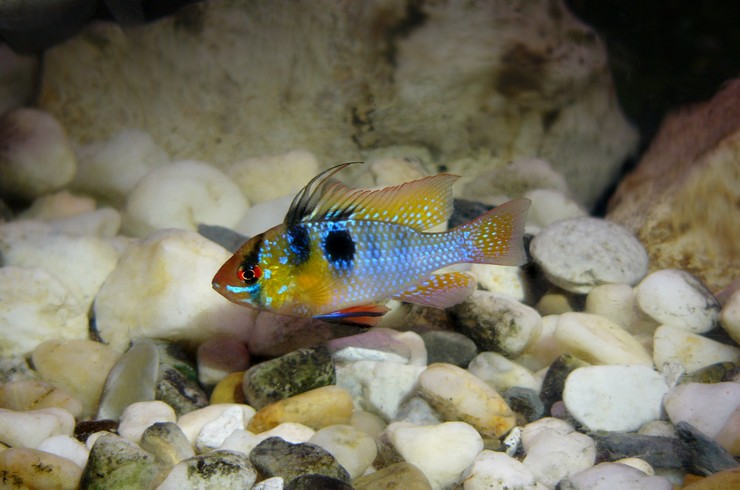 Particular attention should be paid to the purity of the water in the aquarium. It is recommended to install an efficient external filter and compressor. The thermostat is also a mandatory technical element, because the temperature in the aquarium will have to be maintained at at least 25 ° C.

Apistograms feel most comfortable in water rich in humic substances. The easiest way to create a black tropical water effect in your home aquarium is to use the Tetra ToruMin Natural Peat Conditioner. To eliminate the accumulation of hazardous waste products in the aquarium water, change 20% of the water weekly.

Despite the fact that the Ramirezi apistograms are real cichlids, they have a soft and peaceful character, so they will be an excellent choice for a general aquarium with small tropical fish. Viviparous peciliae (swordtails, platylias, guppies, mollies), small haracin: blue and red neons, rhodostomuses, tetras will become excellent neighbors. Also suitable for cohabitation are rasbora, medium-sized barbs, laliuses, scalars and, of course, peaceful catfish – corridors and ancistrus.

It should be noted that apistograms are one of the few fish that get along well with discus, because they easily tolerate warm water up to 30 ° C. They go well with other types of apistograms – if there is a suitable volume and a large number of shelters.

It is not recommended to keep apistograms with small aquarium shrimps, the juveniles of which can be easily eaten by dwarf cichlids.

Of course, you should not settle Ramirezi’s apistograms with large predatory cichlids and cold-water goldfish.

If desired and a little skill, Ramirezi apistograms can be diluted at home. If the aquarium is a species, then spawning can take place right here. Otherwise, it is better to prepare a separate container of 15 liters or more.

It is not difficult to determine the sex of apistograms ready for reproduction. Males are larger, their color is more intense. The first rays of the dorsal fin are elongated and black. The abdomen in females has a pink spot, in contrast to the orange in males.

Spawning is not always possible with artificially created pairs. Therefore, it is better to purchase a flock of 6-10 individuals of different sexes and wait until a natural pair is formed. It is recommended to raise the temperature to 28-30 ° C and soften the water with frequent changes to stimulate spawning.

The female lays eggs on flat surfaces: stones, wide leaves of plants, glass. The male follows her and immediately fertilizes the eggs. The average fecundity of a female is about 200 eggs.

Usually apistograms are distinguished by a pronounced instinct for caring for offspring: they guard the clutch, fan it with fins, remove dead eggs. In rare cases, new parents are able to eat their eggs – in this case, they need to be planted.

The incubation of eggs lasts 2-3 days, like the subsequent stage of the larva, at which time the fry feed on the contents of the yolk sac. Then they switch to self-catering.

In aquariums with fry, it is recommended to make daily water changes, but not more than 10% of the volume of the aquarium.