It is not uncommon for the male to jump on another four-legged friend. It is also not surprising that it is not always a female conspecific. Nevertheless, in this context, one or the other dog owner may wonder whether there are gay dogs. This post gives answers.

Contents hide
1 Gay Dogs in Brief
2 Are There Gay Dogs?
2.1 Other reasons for jumping on male conspecifics
3 Prevent Jumping/Climbing as a Behavior

Are There Gay Dogs? 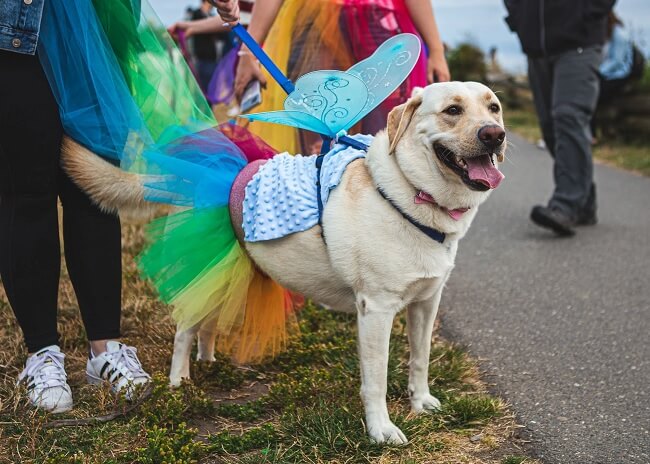 If the male gets mounted, it is not an immediate sign that your dog is gay. The same applies, of course, to the four-legged friend who mounts yours. Homosexuality in the animal kingdom is a very controversial topic among experts. Basically, a male dog naturally follows the urge to reproduce. This in turn could mean that the four-legged friend is not homosexual from birth. However, it is still far from proof that the dog may develop other tendencies over time. However, so far there are no specific studies or official evidence on this topic. Climbing on a male mate can have many causes and is not necessarily evidence of [email protected] love in dogs.

However, the question of whether there are gay dogs cannot be answered clearly with “yes” or “no”. Homo- or bisexuality has currently been proven in more than 1,500 animal species. Therefore, it cannot be ruled out that this may also happen with dogs at some point in the future. If the dog becomes [email protected] fixated on a male or female conspecific, this should not be prevented. There is only one exception here. This takes effect when the other male dog feels harassed or disturbed by the behavior of your dog. Then you should intervene.

Other reasons for jumping on male conspecifics

Prevent Jumping/Climbing as a Behavior

Owners or mistresses should definitely intervene in such behavior. The problem is that the four-legged friend cannot distinguish when the behavior is okay and when it is not. This makes it possible that jumping on objects and conspecifics leads to people climbing on. In case of doubt, the dog would also like to submit you as the owner. Clear commands such as “Off!” And “No!” Should therefore be pronounced when jumping over other males and objects.