The Australian Cattle Dog is a medium-sized herding dog breed. Cattle Dog is tough, hardy, very intelligent and loyal, capable of defense. Absolutely unpretentious in terms of care, but needs good physical activity. Can be used as a herding dog, sports dog, or just a companion. 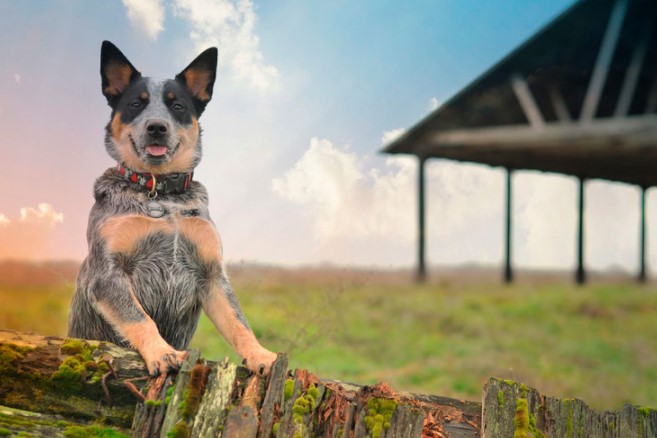 The history of the Australian Cattle Dog begins with the acquaintance of European settlers with the Dingo. The first colonists to arrive on the continent studied wild dogs, observed them, and tried to tame them. Sometimes it worked. Weaned at an early age from their mother, puppies were attached to the owner, were good guards, and did not bark at all. Despite these advantages, predators remained predators. They were unpredictable and troublesome. At the same time, the first experiments on crossing the Dingo with other breeds began.

In the early 19th century, farmers found it difficult to move livestock over long distances. In one run, losses amounted to 200 heads. It was obvious that a four-legged helper was needed who could accompany them on the way, possessed endurance, strength, could protect the herd from wild animals, and, if necessary, collect those lost in the thickets. At the same time, they began to import various shepherd dogs, mainly from the Collie clan, but they did not adapt well to the Australian heat and were hard to overcome distances. Besides, they were too noisy.

In the 20-the 30s, a South Wales farmer Thomas Hall, on the advice of his parents, crossed a Dingo with a Short-Haired Blue Collie, which he imported to Australia. At the time, they were known as the Welsh Collie. For 30 years he did not share the formula for success with anyone and used his dogs himself, they were called Halls Hillers.

After the death of the farmer in 1870, his farm began to be sold off, and dogs became interested in the Australian herding dog society. Among the members of the society was the Bagust family, which later made a huge contribution to the development and improvement of the breed. In 1893, Harry Bagust began infusing the Halls Hillers with the blood of Dalmatians, Dingoes, and Australian Kelpies. The dogs acquired an unusual color. The assistant farmer Bagust Robert Kaleski was an active propagandist of the breed. He wrote and published the first standard in 1903. The breed was later officially recognized by the International Cynological Federation as the Australian Cattle Dog. 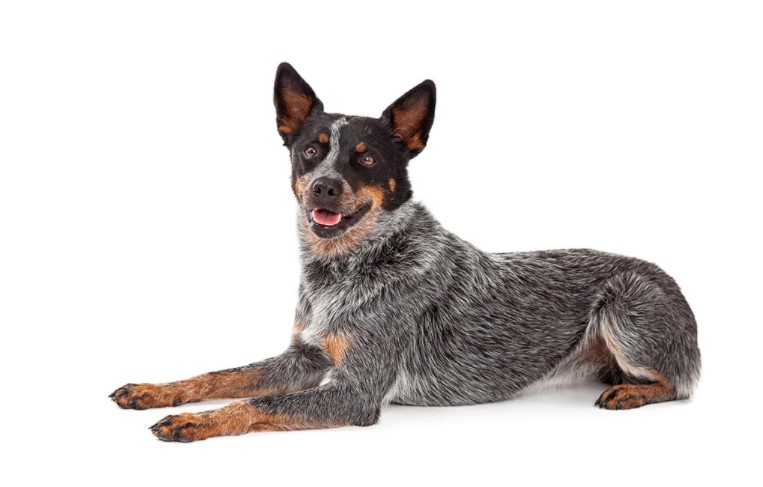 The Australian Cattle Dog is a robust, well-proportioned, compact dog that should give the impression of agility, strength, and tenacity. The body is somewhat stretched, the length refers to the height as 10 to 9. The height at the withers in males is 46-51 cm, in females – 43-48 cm, the average weight is 20 kg.

The head is proportional. The skull is broad, slightly convex between the ears. The stop is clearly pronounced. The muzzle is wide, of medium length, deep, gradually tapering towards the black nose. The lines of the muzzle and forehead are parallel. The lips are dry and firm. The cheekbones are well-muscled and not protruding. The jaws are strong, the lower one is especially well developed. Teeth healthy, strong, scissor bite. The eyes are medium in size, oval, dark brown in color. The ears are of medium size, wide at the base, erect, with moderately pointed tips, set wide apart and turned to the sides. The inside of the ear is covered with hair.

The neck is very strong and of medium length. The topline is straight. The back is strong. The loin is wide. The croup is long, sloping. The chest is well-muscled, deep, and moderately broad. Ribs well sprung, but not barrel-shaped. The sides are deep. The tail is set very low, reaching the hock, drooping, or slightly curved. The tail ends with a tassel. The forelegs, viewed from the front, are straight and parallel, very strong. Hindquarters, viewed from behind, straight and parallel, broad, muscular, strong. Paws are round, toes are short, well-knit. The nails are short and the pads are hard.

The coat is smooth, double, formed by a short, dense undercoat and straight, coarse guard hair, which fits snugly over the body and protects the dog well from moisture. On the thighs, the coat forms a small feathering. On the head, the front of the limbs is very short. The average length of hair over the body is 2-4 cm. Possible colors: 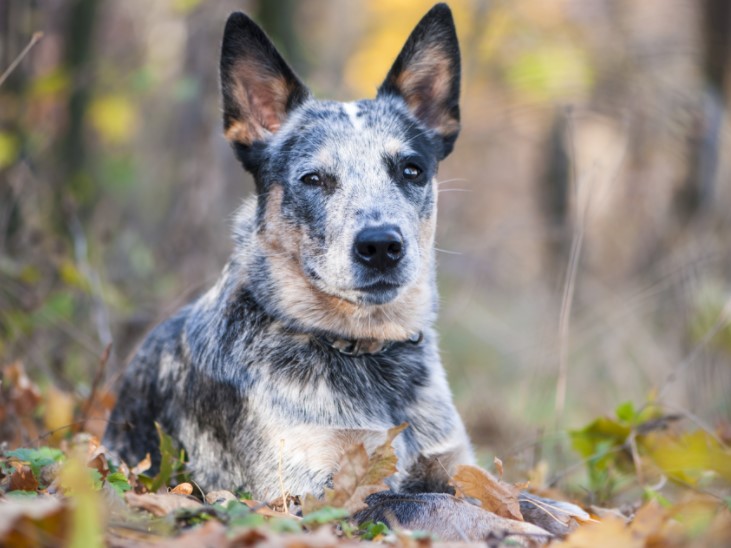 The Australian Cattle Dog possesses all the qualities that a good shepherd needs, he is swift, hardy, agile, able to carefully and purposefully bite animals while managing the herd. But still, first of all, he is a companion, friendly, loyal, extremely intelligent, and obedient. It can be wayward and stubborn, especially at a young age, has its own opinion on everything. Gets along well with children of different ages. However, problems can arise in relationships with very young children. It is not the dog that is dangerous, but its excessive energy. In excitement, she can knock down or grab the baby by the hand.

The instinct to graze in different dogs is expressed in different ways. In puppyhood, dogs may indeed bite lightly on the ankles of family members, but this behavior is easily corrected. They treat strangers with caution, but without undue aggression. It usually does not go further than barking and formidable growling. If the dog senses danger from a stranger, it may bite. Able to defend family members and property, which makes it possible to use a friend as a watchman and bodyguard.

The Australian Cattle Dog is very smart and smart, but at the same time simple-minded and even simple-minded. The dog is easily tricked. Also, many owners note that the dog is very shy. To go to the toilet for a small dog, he climbs far, often hiding in bushes in the literal sense of the word. He can fall out in the mud or huddle in someone’s hole, but then he is very worried that he has got his paws dirty. Likes to be in the spotlight. He is ready to accompany the owner always and everywhere, he is cheerful, playful, and funny.

It gets along very well with other animals in the house. To dogs on the street is often indifferent. Very rarely provokes conflicts, but always responds with aggression to aggression. If small animals or birds live in the house, you don’t have to worry. The dog is almost completely devoid of the hunting instinct. 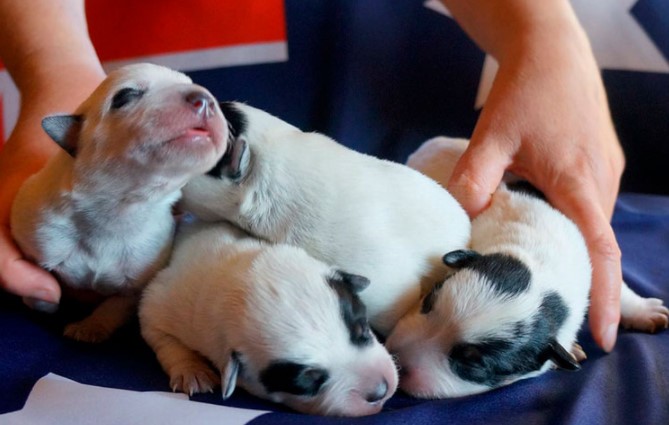 The Australian Cattle Dog does not require any special care, which is a definite plus. Abundant molt occurs once a year in spring. During this period, it should be brushed a little more often in order to speed up the coat change. In females, it can also be associated with estrus. The rest of the time it is enough for the dog to comb two or three times a month. Dogs are quite clean, and their fur is practically odorless. If the dog is smeared with dirt, you can simply rinse it without detergents. Ears have to be cleaned of accumulated sulfur very rarely. Claws, if they do not grind off on their own, are sheared. Normally, they should not touch the floor. 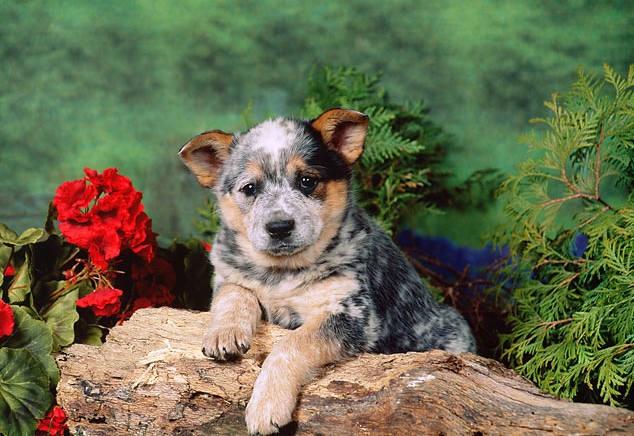 In the English version of the breed standard, the word strong – “strong” occurs more than 10 times. An Australian Cattle must be strong, hardy, and healthy. Perfectly adapted to different living conditions and climates. Breeders are trying to preserve these qualities, however, it has not yet been possible to completely eradicate some hereditary diseases:

The average life span of an Australian Cattle is 12-13 years. Many dogs remain active until old age. Rarely suffer from problems with vision, hearing, and loss of teeth.