Many large freshwater crayfish are important aquaculture products and are grown for the purpose of producing gourmet meat. However, some of them are so striking in appearance and interesting forms of behavior that they have won the hearts of many hobbyists and are kept as pets. These are the types of Australian red claw crayfish. In our article, we will tell you how to keep this handsome man at home.

Australian Red Claw Crayfish (Cherax quadricarinatus), also known as Red Claw Crayfish, is a freshwater crustacean of the Decapod order. It became widespread, first of all, as a commercial species, which is actively used in aquaculture. The meat of these crayfish is considered a delicacy and is slightly inferior in taste to see lobsters.

However, its beautiful appearance and unpretentiousness to the conditions of keeping made it popular in the aquarium hobby. This exotic animal is not yet often found in home aquariums, but every year there are more and more lovers of crayfish among those who want to have an unusual pet. And most often the choice of novice crayfish falls on the Australian red claw crayfish.

Observing the life of crayfish is a fascinating experience. That there are only regular “design” rearrangements in the aquarium. You don’t even have to try to carefully layout stones, shells, and other small decorations. Once the crab’s claws reach them, he will place them where he sees fit and will be very unhappy if you try to disturb the created landscape.

The content of freshwater crayfish is not much different from the content of aquarium fish, but there are also some nuances here.

The Australian red claw crayfish is a fairly large animal. The maximum body length can reach 40 cm, but in home aquariums, it usually does not exceed 20 cm.

The external structure is typical for all decapod crayfish. There are two divisions – the cephalothorax, covered with a powerful chitinous shell, and the mobile abdomen, ending in a wide caudal fin. Walking legs and pincers, jaws, as well as sensory organs – eyes and antennae – are attached to the cephalothorax. The abdominal segments also have small swimming legs – pleopods.

The color of the Australian red claw crayfish looks very impressive. The main color of the body is blue or blue, but between the segments, compounds that differ in color are found: reddish, orange, blue, crimson. Also, yellow specks are scattered all over the body. Red stripes stretch on both sides of the abdomen. Interesting fact: the color of the body of red claw crayfish directly depends on the hardness of the water. If its indicator is high enough, then crayfish will appear before us in all its glory, with all the overflows. In soft water, the body darkens. 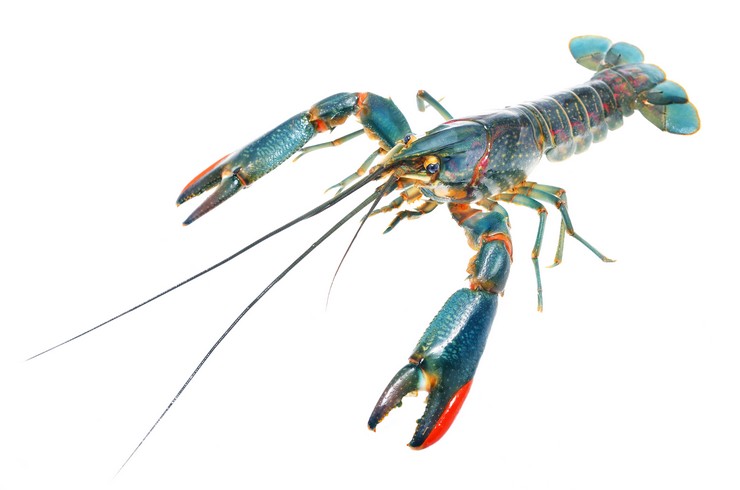 By the way, it is very easy to distinguish a sexually mature male from these crustaceans. It is in males that special red outgrowths (“red claw”) appear on the pincers, which are the brighter the more the male is ready to mate.

Life expectancy in a home aquarium is up to 5 years.

As the name implies, in nature, these crayfish live in Australia, as well as in New Guinea. This type gives preference to stagnant reservoirs, ponds, irrigation canals, or shallow rivers.

Unlike its close relative Yabbi the destroyer, this species is not particularly “digging”. Instead of digging holes, the crayfish prefers to find natural shelters under stones, snags, and bank slopes.

You will need an aquarium with a volume of 170-200 liters or more to keep Australian red claw crayfish. You can plant 2-3 crayfish here. The bottom area is very important, so the aquarium should be wider but lower. Crayfish do not often run away from their tanks (as long as they are happy with the quality of the water), but to protect them from accidents, it is better to take care of the lid.

A layer of soil of an arbitrary fraction is laid on the bottom, but on top, it would be ideal to put all possible “entertainment” for crayfish: colored pebbles, small grottoes, artificial plants, etc. By installing them in the right places (according to the crayfish), the pet will create a comfortable environment for itself. 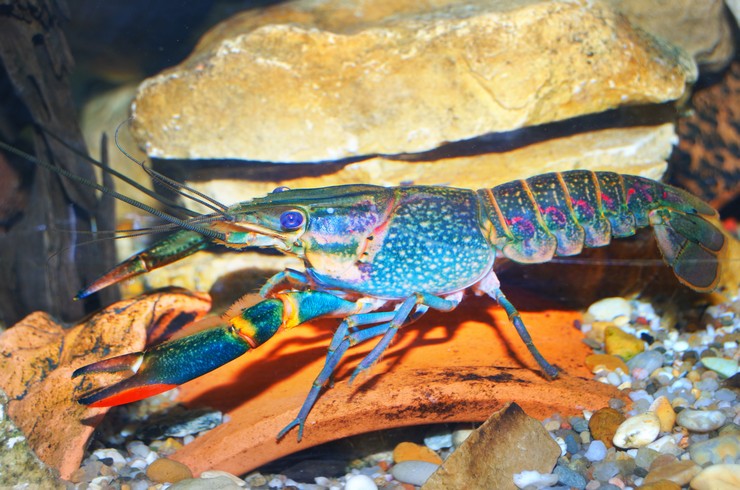 Do not abuse large stones, they will only take up space. But it is imperative to take care of a large number of shelters. Ceramic flower pots, snags, coconut halves, wide pipes can be used. Shelters are very important in the life of crayfish – they hide there after molting until their cover hardens.

It is useful to place dried oak leaves or Indian almond leaves on the bottom of the aquarium, which will not only help create a favorable environment close to nature but are also an excellent food for crayfish.

The filter must be installed efficiently so that the water quality remains consistently high. Round-the-clock aeration is very important, especially in the warm season, when the temperature of the water rises and oxygen begins to dissolve in it worse.

It is recommended to change 20% of the aquarium water once a week. This will prevent hazardous nitrogen compounds from building up in the water. Freshwater (if it comes from the mains) is best prepared with the Tetra Crusta AquaSafe conditioner. It will instantly make it safe by removing chlorine from the water, as well as heavy metals, one of which, copper, is extremely toxic to crustaceans.

Live plants are not used in aquariums with Australian red claws, as they will be destroyed immediately.

Do not get carried away by the increased temperature of the water in the aquarium, this will accelerate the metabolism of crayfish and shorten the lifespan.

Australian red claw crayfish molt regularly as the hard outer cover prevents them from growing. In this case, the old “skin” is discarded, and the new one gradually hardens. At this time, crayfish are the most vulnerable, they can be damaged by both fish and their own relatives. During molting, crayfish hide in shelters until their cover becomes strong again. The frequency of molting depends on the age of crayfish: young individuals molt more often, adults – less often.

Despite their size and formidable claws, Australian crayfish pose no danger to most fish and even small shrimp species. In rare cases, they are able to grab a medium-sized fish. Snails, fish eggs, and, of course, live plants, which will certainly be cut and eaten, can suffer from their actions.

It is better not to combine aggressive species (astronauts, crayfish, large cichlazomas) with crayfish since these fish can destroy their neighbors during molting.

Australian red claw crayfish are omnivores. They will eat whatever they can find: plants, dry leaves, dead fish, eggs. It is worth remembering that many natural products often offered to crayfish (bloodworms, fish fillets) can quickly spoil the water. Therefore, it is best to stop at specialized dry food for crustaceans, which, on the one hand, will provide a nutritious and varied diet, and on the other, will not pollute the water. The Tetra Crusta food series, which are available in several forms (pellets, sinking sticks, assorted foods), are excellent for Australian red claw crayfish.

Practice shows that crayfish are happy to use sinking tablets for catfish and other bottom fish, so you can use Tetra Wafer Mix or Tetra Pleco Spirulina Wafers. 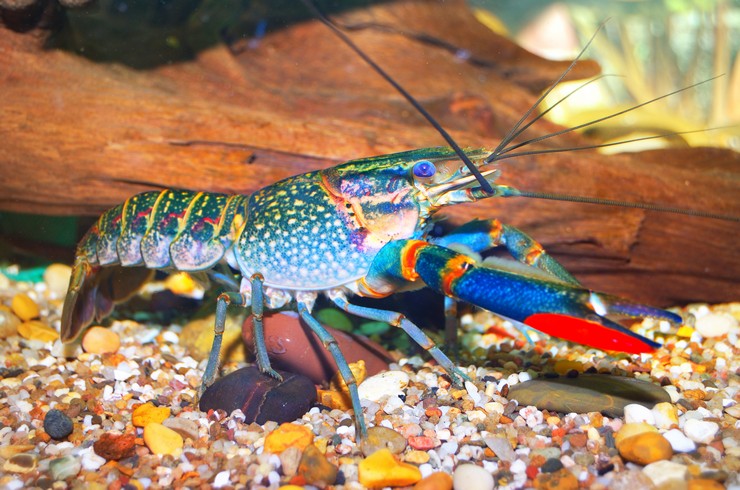 Also, don’t forget about dried oak leaves or Indian almonds, which are a favorite treat for crayfish.

Breeding Australian red claw crayfish at home is easy enough. They reach sexual maturity at the age of 6-7 months. Females are highly fertile and are able to lay more than 1000 eggs, and they can do this up to 3 times a year.

To stimulate spawning, it is very useful to separate males and females for a week, after which their sexual activity increases markedly.