The Basenji is an ancient African breed that does not know how to bark, but it is far from silent. Very smart, energetic, beautiful, and sociable, at the same time independent, stubborn, and poorly managed on the street. Basenji is a special dog and hardly corresponds to the stereotype inherent in this word. 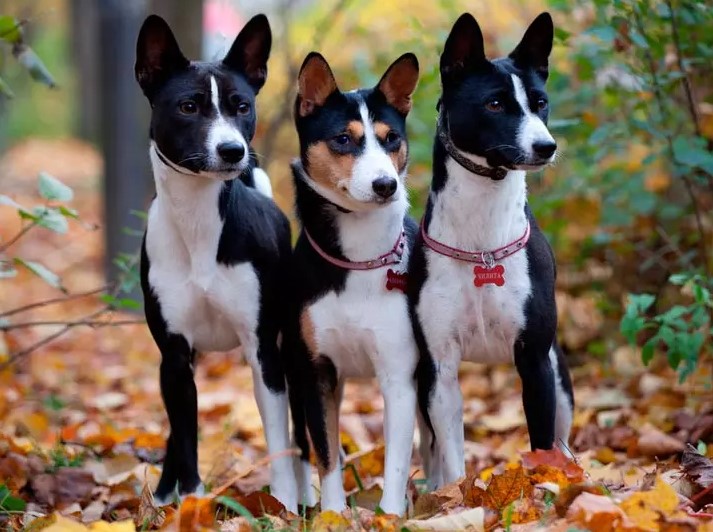 Basenji is one of the oldest breeds. Similar dogs have been found in Egyptian tombs that are over 6,000 years old. In the tomb of Tutankhamun, there were two of these, embalmed, wrapped inexpensive fabrics and with collars made of precious stones. They were probably of great cultural significance. Also, household items, figurines, wall images indicate an ancient origin. With the fall of civilization, the Basenjis were consigned to oblivion in North Africa but survived in the central regions of the continent. They were very much appreciated by the natives for their hunting qualities, quickness, extraordinary mind, and silence. They have even credited with magical properties: the ability to restore the aura and take away negative energy.

Interestingly, even today in the African jungle, you can find free-living Basenjis. They are half-feral dogs that are quite capable of foraging for themselves. In the wild, they gather in small flocks.

In 1905, several Basenji dogs were brought to England. However, the attempt to introduce the world to these amazing creatures was unsuccessful. The dogs did not endure the many months’ journey and soon died. The breed’s official debut was in 1937 when the Basenji was exhibited at a Kraft show called the Congo Terrier. 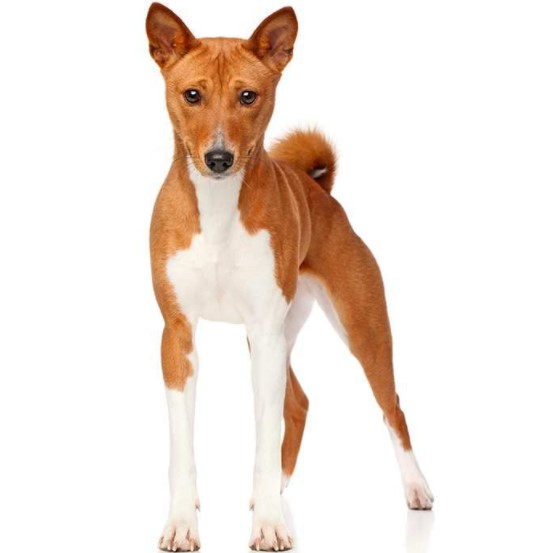 The Basenji is an elegant, short-haired dog with thin bones. The head, with erect ears and wrinkles, is carried proudly on a well-arched neck. The tail is curled into a tight ring, the chest merges smoothly into a well-defined waist.

The skull is flat, of medium width, tapering towards the nose. Numerous fine wrinkles form on the head during arousal. The jaws are strong with a perfect scissor bite. The eyes are almond-shaped, dark, set obliquely, looking into the distance. The expression is a bit cryptic. The ears are erect, small, of fine texture. The neck is of good length, strong, with a noticeable nape, well set on the shoulders.

The back is horizontal, short. The loin is short. The tail is set high, close to the spine, twisted into a single or double curl. The chest is deep, rising to a pronounced waist. The forelegs are dry, thin-boned, and muscular. Feet are small, compact, with deep pads and short nails. The coat is short, dense, tight to the body. No undercoat. Colors: 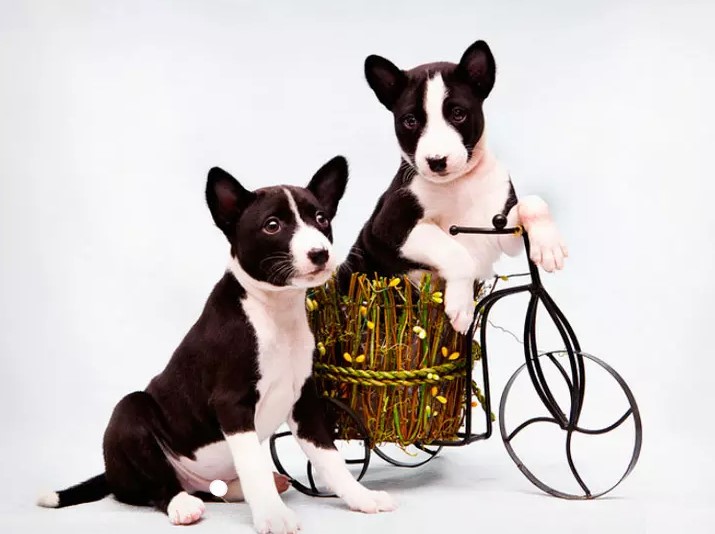 The Basenji has a complex but at the same time very interesting character. Many people compare them to cats because of their “mannered” behavior, curiosity, sharp mind, and stubbornness. These are mischievous, mobile dogs with a pronounced sense of humor. They are interested in absolutely everything that happens around them and they have their own opinion on everything. The Basenji is very restrained and independent.

They really do not know how to bark, but they are not shy in showing feelings and accompany many of their actions with other sounds. They know how to growl loudly, squeal, groan, snort, howl. It is believed that the Basenji once knew how to bark, but a man taught them to “quiet” hunting, where the dog barking was superfluous. By the way, the howls of the Basenji and the singing New Guinea dogs are very similar. No other dog breed can boast of the ability to sing like that.

In the house, the Basenji considers himself a full-fledged member of the family, defends his rights, requires attention and time. Gets along well with cats, especially when growing up together. However, avoid introducing smaller pets, such as birds, ferrets, hamsters, guinea pigs, or rats, as hunting instinct can take over. Basenji is often aggressive towards other dogs, regardless of their size or gender. This behavior is at the genetic level. The Basenji has no desire to harm the opponent, only to prove their superiority or innocence.

With the owner and members of his family, the Basenji is very lacquer and gentle. Strongly attached to all family members. He prefers to sleep on his feet, or even on his arms. Gets along well with children. Basenji are playful, but difficult to call friends for a child. A puppy often has to show that a human baby is not a game that you need to chase and bite. In games, Basenji mostly runs in circles or runs away, does not bring sticks, and does not listen to commands. Therefore, children are not very interested in playing with him.

Basenji does not have a watchdog instinct and is absolutely not aggressive towards people. With strangers, he is affable, indifferent, or careful. Some dogs are very friendly towards everyone around them. 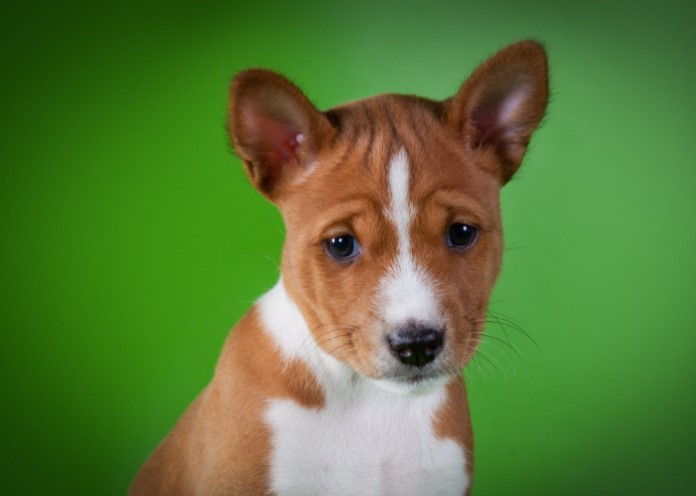 The African dog is not adapted for year-round living on the street in the climate of the middle zone, but it is great for keeping in a private house or in an apartment. Loves comfort and gets it by any means. At home, she should have her own corner with a couch and toys, where you can retire and relax. Basenji do not smell, even when their coat gets wet. The seasonal molt is moderate, the rest of the time is weak. The coat is short and rather stiff, if not cared for, it clings to upholstery and clothing.

It should be mentioned that these dogs simply cannot stand rain and cold. They would rather agree to walk when the street is -10 ° C than stick their muzzles outside in rainy weather. This does not apply to swimming. Most Basenji calmly tolerate water procedures and love to swim in the bodies of water in summer, especially if there are ducks or other animals to hunt.

Basenji are naturally very clean. They even wash like cats. You never hear a foreign smell from them. Moreover, many Basenji owners claim that they are the cleanest dog breeds. The coat should be brushed once a week. This will keep shedding to a minimum. You don’t have to bathe your dog often. The ears are cleaned as needed. Brushing your teeth is recommended once a week, but often needs to be replaced with toys and treats from the dental range. The claws are sheared as they grow back. 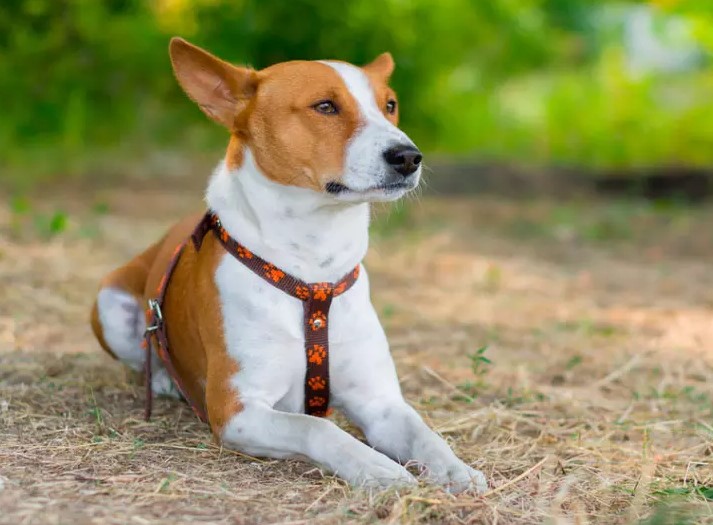 Most Basenjis are strong and healthy dogs. The breed belongs to the prosperous, but not devoid of genetically inherited diseases. One of these is Fanconi’s syndrome. The disease is expressed in impaired functioning of the kidneys. In addition, there are diseases to which a predisposition is noted:

The average life expectancy is 13 years. The most common causes of death are old age (30%), Fanconi syndrome (13%), accidents and injuries resulting from bites (9%), neoplastic diseases (9%).