That’s a Hush Puppy, many people will say when they see the Basset Artesian Normand for the first time. This odd “dog name” has stuck in the minds of the general public for decades for the basset hound. But how did he get the name, which actually stands for small, deep-fried cornmeal balls from the southern American kitchen?

In 1958, a company in the United States developed comfortable shoes, called them Hush Puppies, and chose the basset hound as their trademark because of its calm and coziness. The buyer should associate this with the shoes. The project was successful, and the Basset has made the shoes world-famous to this day. The noble-looking dog ensured ample sales.

Actually, the Basset Artesian Normand is an outspoken hunting dog that accompanies its master on the hunt for small game. The Basset presents a moderate pace that the hunter can easily follow. He works alone or in a pack, barking loudly, following the game independently through the undergrowth and driving it to its master. Rabbits, hares, or deer are hunted. 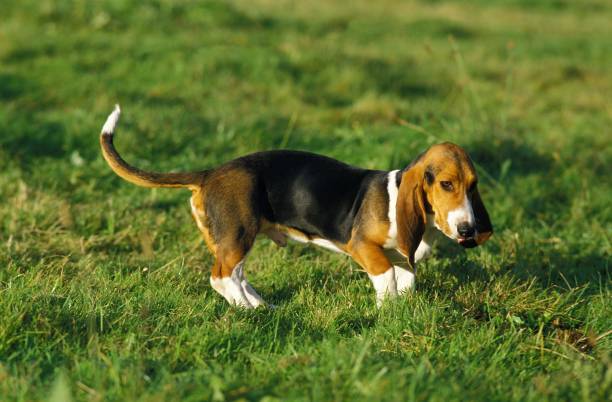 The home of the Basset Artesian Normand is in France. The FCI (Fédération Cynologique Internationale) has officially recognized the breed and classified it in the group of small scent hounds or scent hounds. The basset hound grows up to 36 cm in height and weighs around 20 kg. Its relatively long body, short legs, two- or three-colored fur, and long, soft floppy ears are striking.

By nature, the basset hound has a lively and spirited nature, which benefits him when hunting in a pack. He feels comfortable among many other dogs, but his “family” does not necessarily have to consist of other dogs. It is also an ideal companion for two-legged friends, who fits into the family with calm and serenity. He behaves calmly and friendly towards children, older children become beloved playmates. He races with them, tirelessly fetches the ball, or plays hide-and-seek. During the breaks, he is happy to be stroked extensively, but he also needs some time for himself, which you should definitely give him. Due to his gentleness and loyalty, he becomes the ideal family dog ​​if he is given enough exercise and activity. A couch potato in a city apartment is certainly not the right owner for a Basset Artesian Normand that wants to be challenged physically and mentally on a daily basis.

However, the basset hound can sometimes be stubborn and stubborn, traits that need to be addressed from an early age. The Basset requires consistent training, which should not be done with strictness, but with a lot of empathy and patience.

The basset hound is a powerfully built and well-muscled hunting dog with relatively short legs, an elongated body, and a smooth, two- or three-tone coat. The elegantly shaped head with the long, soft ears, which are slightly turned in and should end at a point, is striking. His large, dark eyes express calm and serenity. The long neck merges into a firm and broad back at the top, in the lower area it connects to a stately chest, where the sternum is clearly visible.

The long tail is carried like a saber. From a strong, high-set root, it tapers evenly to the tip, which is just allowed to touch the ground. When hunting in tall grass, the basset hound positions its tail so that the hunter can easily see it.

The basset hound’s forelegs and hind legs are short but strong, as are its thick paws, which are slightly turned outwards on the forelegs. The gait is free and even.

The short, close-fitting coat is spotted. It has two or three colors. The bicolor basset hound carries a light brown (fawn) and white, the tricolor also has a black saddle.

Nature and Behavior of the Basset Artesian Normand

The basset hound was bred for hunting, work that has shaped its character. As a pack dog, he has a high level of social compatibility, which also makes him a pleasant four-legged family member. However, if he is kept purely as a family dog, he needs a lot of exercise and activity. He likes to accompany his humans when jogging, loves hidden object games, and cuts a fine figure in many dog ​​sports where he doesn’t have to jump (his legs are too short). Instead, he scores with perseverance, great motivation, and good discipline. 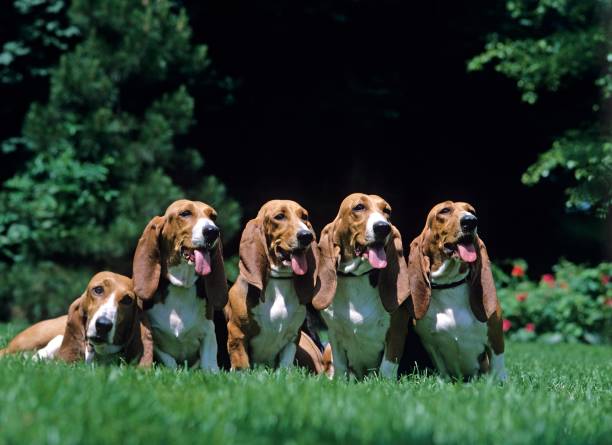 Its high intelligence is remarkable, which allows it to decide and act independently in dubious situations when hunting. This quality, coupled with a not to be despised stubbornness, makes it necessary for the owner of a basset hound to give the puppy a consistent upbringing. Love and patience, as well as lots of repetition, are required to make the basset hound a capable hunting and family dog. Once he has learned his lessons, he becomes a loyal and pleasant companion who, thanks to his sensitive nose, reliably follows the trail and brings the hunter to his destination without much haste.

At home, the basset hound behaves very calmly, unobtrusively, and docilely. He likes to play with the children and lets his mistress pamper him with strokes, but at the same time, he always keeps an eye on the garden. His fine nose reports every intruder, who is immediately chased away.