Breeders who decide to start breeding Bernese Mountain Dogs should pursue the goal of improving the breed, preserving the unique beauty, temperament, working qualities of dogs.

When to Mate Bernese Mountain Dogs 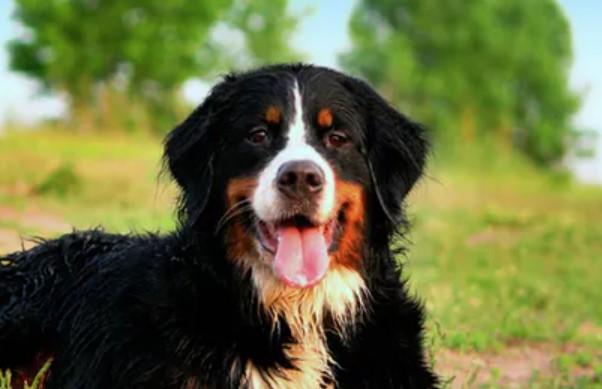 A female’s first heat occurs at 11-12 months, which is completely normal because large breeds are known to mature more slowly. The cycle is repeated every 6-7 months, but the characteristics of the dog should be taken into account. However, the first heat is not at all a reason for the first mating. It is not recommended to breed a female younger than 20 months. The best time to mate Bernese Mountain Dogs is on the eve of ovulation during the second estrus, while remembering that the onset of ovulation shifts after each birth. After giving birth, the next mating is organized after 12 months. Females over 7 years old must not breed.

How to Determine if a Female is Ready for Mating

The easiest way is observation. In a female, ready to mate, the discharge from the loop becomes light with a small amount of blood. When stroking the croup, the bitch pulls her tail to the side.

To determine more accurate terms, a cytological examination of a vaginal smear is performed. Based on the results of the study, you can determine the most successful day for mating.

The breed has a predisposition to a number of diseases, therefore, the Bernese Mountain Dog mating should be approached responsibly, and not only with the aim of profit from the sale of puppies. There are a number of requirements for breeding animals. A conscientious breeder will not neglect them if he wants to get healthy offspring and act for the good of the breed.

For a female, temperament is the most important characteristic. She must be balanced, calm, obedient. After all, character traits are passed on to offspring, and puppies develop, adopting the behavior of the female. Therefore, the ideal temperament of the Bernese Mountain Dog female is more important than all other characteristics.

Health is important, and individuals who have undergone surgery as part of the treatment of osteochondritis dissecansor any other breed disease should not be allowed to breed.

In addition, the female must be in a shape that meets the requirements of the Breed Standard. If a size is not so important since many small bitches are involved in breeding, then the color should be classic, the head is wide, the eyes are of a standard color, the bite is correct, the expression of the muzzle is kind. Of course, no bitch is perfect, each has its own flaws, but she must have characteristics that allow judging her high quality.

There are also difficulties with the choice of a male dog, although there are a lot of applicants, and some of them are involved in intensive work. It is generally accepted that the more a male participates in mating, the more experienced he is, and the offspring from him are of high quality. But the “[email protected] giant” is not the best choice for mating. It so happens that calm males become hyperactive with frequent mating. An obedient dog is seized by instincts that turn out to be stronger than obedience to the owner. The male begins to leave marks all over the house, to look for females in the street, to feel frustrated by the impossibility of satisfying the instinct, to fight with other males. Therefore, in search of a Bernese Mountain Dog, it is worth giving preference to those who are moderately [email protected] active, have the temperament characteristic of the breed, and, of course, take into account the breed qualities in general. It is important to understand the strengths and weaknesses of the male and female.

If we talk about the pedigree and awards of animals, then it is much more important to study the pedigree of a female and a male. Although the animals must have documents confirming their belonging to the breed and admission to breeding. Many of the defects are the result of the manifestation of a recessive gene inherited from individual to individual, for example, cleft palate, undershot, overshot. Therefore, it is important to find out information about what the ancestors were ill with.

Before mating, you need to undergo an examination at a veterinary clinic, take measures for deworming and vaccination. It is good if there are X-rays on the hands that confirm the absence of hip dysplasia and knee dysplasia, taken at the age of 12 months. The animals must have no obvious genetic defects.

Before mating, it is recommended to wash the genitals of the female with an antimicrobial agent, but not having a negative effect on the mucous membrane.

The dogs should be fed 3 hours before mating and should be walked beforehand.

How is the Mating of Bernese Mountain Dogs

The first mating is recommended with an instructor to avoid mistakes that can affect the mental state of the animals and pregnancy. There is no need to rush the dogs, they need to be given time to get used to each other, and instincts will tell the animals what to do.

The dog feels more comfortable in a familiar environment, so the female is usually brought to the dog’s territory. Animals are left in a room without strangers, unnecessary pieces of furniture, where they will feel calm, and nothing will cause anxiety, aggression.

Some males do not waste time getting to know each other and immediately get down to business, while others first sniff, make trial cages. If the dog is much larger than the female or is not experienced, then the animals are helped. The owner of the bitch or the instructor lifts the body of the bitch, placing his knee under the belly, and holds her by the neck, and the dog is held by the lower back with his hand. This assistance is provided throughout the mating process.

In freestyle mating, help is provided at the end when the female needs to be held while in the castle. Sharp movements of the bitch can injure the dog. Animals must be in the castle for at least 5 minutes. The disconnection is arbitrary.

After the first mating, after 1-2 days, a controlled mating is carried out, since there is no guarantee that even if all the rules are observed, the mating of Bernese Mountain Dogs will be successful. But the fertility of the female should also be taken into account, which is not affected by the quality of the male sperm.