Among the vast group of fish under the general name “barbs”, there are both widely known species (for example, Sumatran) and those that have not become widespread for various reasons. This could be due to a recent discovery, breeding difficulties, or unattractive coloration. Black Barbus originating from about. Sri Lanka is perhaps one of the most beautiful and overlooked views.

Black Barbus (Pethia nigrofasciata) is a small fish from the carp family. In terms of body shape, conditions of detention, and behavior, it is very similar to its closest relative – the Sumatran Barbus, but it is considered calmer. The coloration of sexually mature males is unusual, they have a bright red head and an almost black back of the body.

The first scientific description of the species was made in 1865, and the fish got into the aquariums of amateurs in 1935. But, unfortunately, for more than a century of history, the black barb has not become widespread. This is not least due to the fact that the color of the fish is quite variable. Under poor conditions or stress, individuals of this species become completely pale and inconspicuous. In order for them to unfold in all their glory, you need a suitable aquarium, its correct design, ideally imitating a biotope, flock keeping, and high-quality feeding. 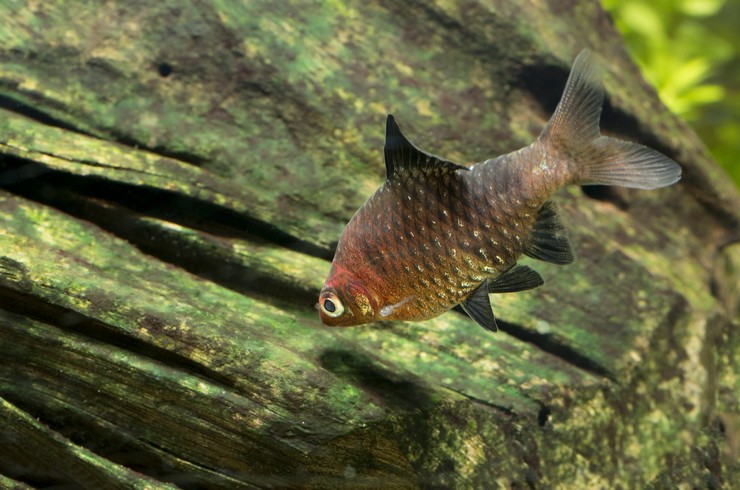 The black Barbus lives in its natural environment only on about. Sri Lanka. In the first years after the discovery, the fish was actively caught for the purpose of sale, which caused severe damage to its populations, the species had to be included in the International Red Book. However, in our time, fishing in nature is prohibited by law and the number is gradually recovering.

The black Barbus has a high, but short body with a pointed head, which lacks antennae. The fins are large, the tail is forked. In the aquarium, males grow up to 5 cm, females are slightly larger.

The scales on the body are large, shiny, each scale has a peculiar edging. The main body color is yellow or yellow-gray, on the sides there are three dark vertical stripes – behind the gills, through the dorsal fin, and at the base of the tail. 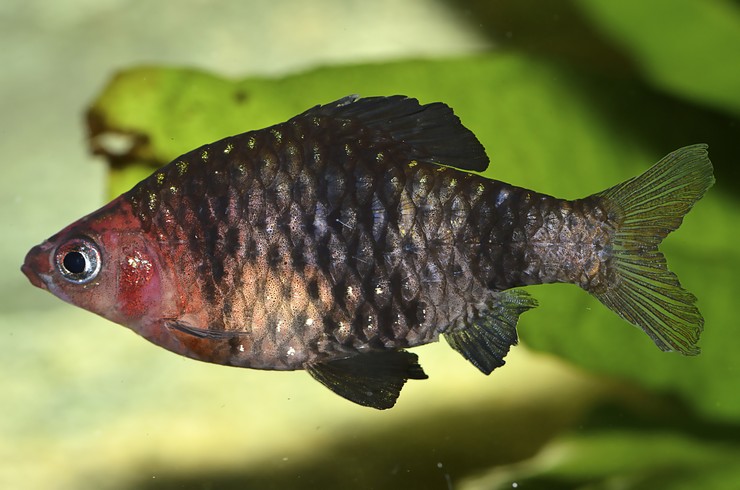 In sexually mature males, the color becomes unusually beautiful. The head turns a bright ruby color, the stripes cease to stand out, and the back of the body can become completely black. Females are more modestly colored, they are dominated by light yellow tones.

Black Barbus is endemic to the island of Sri Lanka. It can be found in the southern part of the island, in the basins of the Kelani and Nilvala rivers. The area is characterized by stable climatic conditions without severe dry periods.

The fish lives in numerous streams with clear water flowing under the canopy of a tropical forest. The bottom in such reservoirs is sandy, strewn with a large number of branches and leaves, due to which it acquires a characteristic “dark” color. The water is soft and sour. A large number of living plants are found. The sun’s rays, penetrating through the dense thickets of the jungle, scatter.

The most important thing that aquarists who want to have a black Barbus (as, indeed, any other species of this group) need to learn is a schooling lifestyle. There must be at least 6 individuals in a group, otherwise, the fish may experience severe stress, which will affect their immunity. When kept singly or in pairs, the fish often show increased aggression towards the neighbors in the aquarium. And of course, only in the flock will all the shades of the fascinating behavior of these funny fish be revealed: games and “showdowns” between members of the group, the relationship between males and females, etc.

To keep a small flock of black barbs, you need an aquarium with a volume of 50 liters or more. The lid is an indispensable element because barbs are very jumpy fish.

It is advisable to cover the bottom with sand or dark small pebbles. Fish will look best in aquariums with dense vegetation planted around the perimeter. A place for swimming is usually left in the center. The bottom is decorated with natural driftwood and stones, which will serve as a natural refuge for fish. 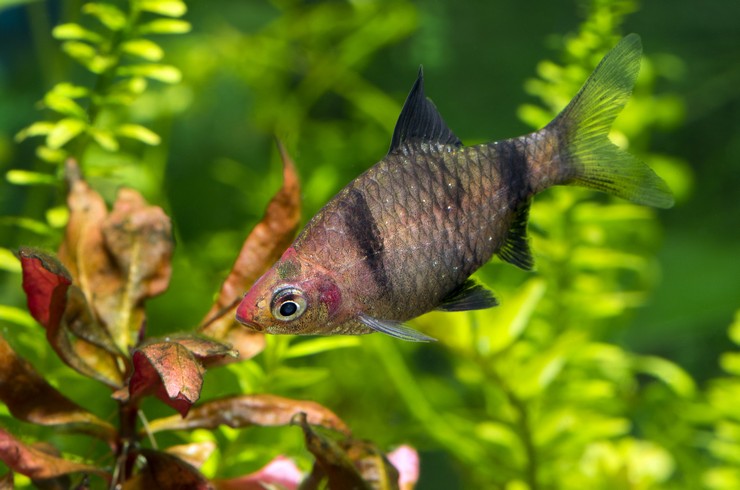 Black barbs prefer to stay in the middle and lower layers of the aquarium. Very bright light is not suitable for them, the fish can get scared, lose color and hide. It is best to make diffused lighting with floating plants (pistia, riccia).

The main requirements of barbs for water quality are purity and high oxygen content. Therefore, a powerful filter and compressor are imperative. The fish is less picky about the temperature.

To improve water quality and remove waste products, it is necessary to make regular water changes in the amount of 25-30% of the volume of the aquarium.

When kept in a common aquarium, the same rule applies as for species – only flock keeping (from 6 individuals or more) allows to minimize the risk of aggression. In general, the temperament of the black barb is much softer than that of the Sumatran or mutant, however, representatives of this species can also chase slow fish or fish with long fins.

The fish can be planted with other barbs – in most cases, this is an ideal keeping option. However, tetras, viviparous, irises, catfish, loaches also get along well with them. 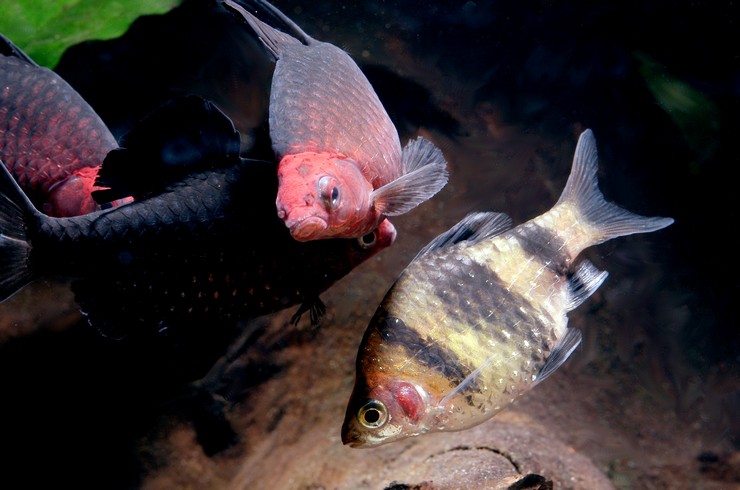 Breeding black barbs are not particularly difficult. It all starts with the selection of manufacturers. In adults, sex is usually easy to tell. Males are much brighter in color, their chest and head are bright ruby ​​color. Females have a more rounded abdomen and larger than males.

Sexual maturity occurs around the age of one year. Before spawning, the selected producers are seated and actively fed with high-protein feed.

A small aquarium with a volume of 10 liters or more is suitable as a spawning ground, the water level should be 20-25 cm. Small-leaved plants or a separator mesh are placed on the bottom since the fish do not show any concern for the offspring.

Ready-made producers are planted in the spawning grounds in the evening. Spawning is stimulated by an increase in temperature by several degrees with the addition of soft water.

At dawn, courtship games begin, and the female lays several hundred eggs. After that, the new parents are removed from the aquarium, 1/3 of the water in the aquarium is changed and methylene blue is added.

Incubation takes 24-36 hours. The larvae then sink to the bottom, where they lie for several days until they use the yolk sac. The fry is sorted as they grow.