The selection forms of scalars are no less popular than natural-colored fish. Obtaining fish with an uncharacteristic color of scales is the result of many years of work by breeders who conduct a large number of crosses and selection for the desired character. The velvety black scalar breed was bred only half a century ago but has become one of the most common among hobbyists.

A black scalar is a selection from the common scalar (Pterophyllum scalare). It is characterized by rich black body color. For this color, genes are responsible, which in natural individuals are responsible for the staining of dark stripes on the body. The first mutations of this gene were discovered in Europe in 1953. Further work of breeders led to the emergence of the well-known black form of scalar, which is also called “Ludwig’s black scalar” after the names of the breed’s creators – Julia and Fred Ludwig, who first reported the resulting form in 1957. 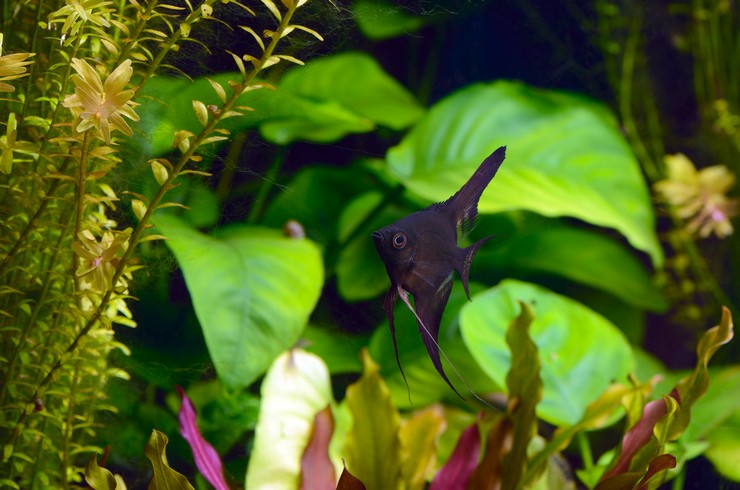 Black scalars look spectacular in aquariums. Black color symbolizes severity, authority, weight. Therefore, it is the scalar of this color that can often be found in office aquariums. Aquarists who choose black are usually characterized by the enterprise, courage, and the ability to cope with difficulties.

The body length of black scalars is about 15 cm, and the span of the fins can reach 25 cm. 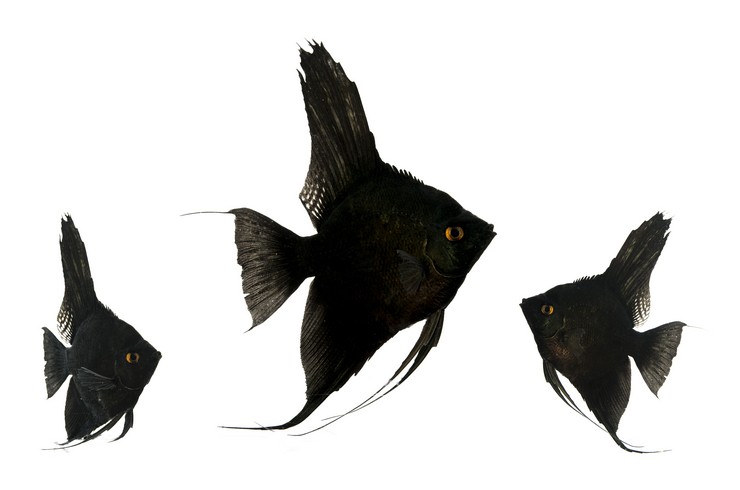 The main feature of this form is the intense black color of the body. The best specimens that meet the breed standards are monotonous and have no light areas. Sexual dimorphism is poorly expressed: males are usually larger and have a more convex forehead.

The black scalar is a breeding species and does not occur in its natural environment. It was obtained through numerous crossings and selection of the most beautiful and productive individuals.

The parental form – the common scalar – lives in South America, in the basins of the Amazon and Orinoco rivers. Prefers warm channels with dense thickets of aquatic vegetation. 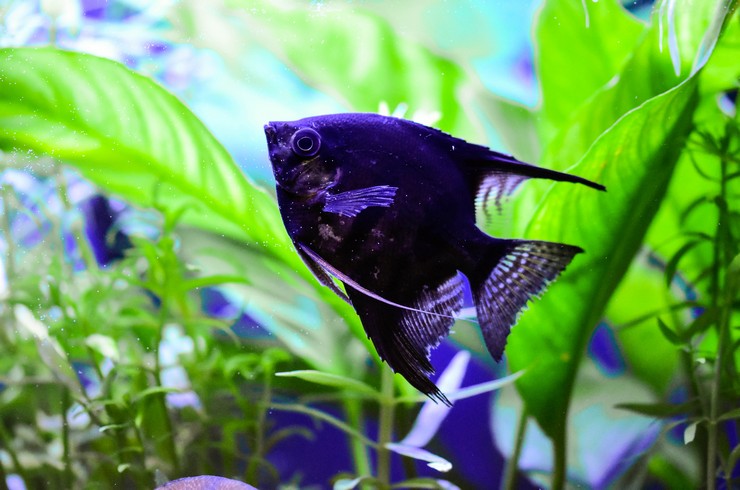 The optimal volume of an aquarium for keeping black scalars starts at 100 liters per pair. But it is best to settle the fish in small flocks of 6 or more. The scalars prefer to stay in the middle layers of water.

Best of all, black scalars look best in aquariums decorated in a natural style. Sand or small pebbles are placed on the bottom, suitable for growing live plants. Natural stones and driftwood are also appropriate. Planting more live plants along the sides of the aquarium will not only provide a good shelter for the fish but also improve the quality of the water in the aquarium. You can use Echinodorus, Anubias, Cryptocorynes, Bacopa, Vallisneria, Ludwigia, and other popular species. Don’t forget to leave open space for these magnificent fish to swim. 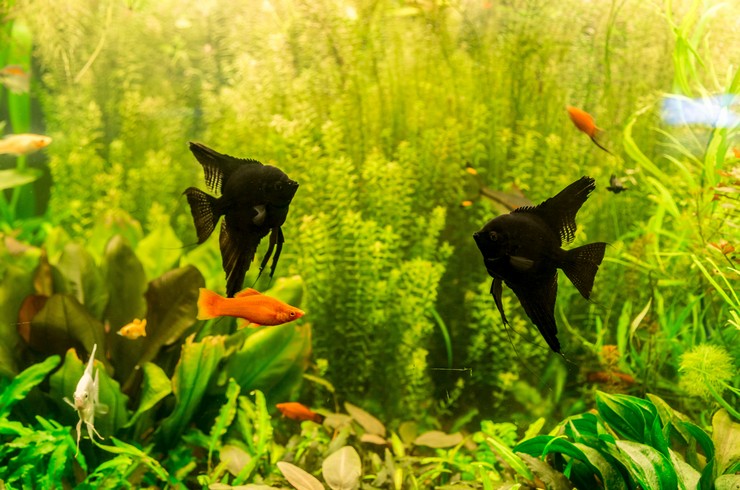 It is important to provide the black scalars with clean, oxygen-rich water, for which an efficient external filter and compressor is used. Scalars are thermophilic fish, it is better to maintain the temperature with a thermostat at a level of at least 24 ° C. Lighting is matched to the needs of the grown plants; scalars tolerate bright light well.

It is necessary to change the water weekly up to 20% of the volume of the aquarium.

Black scalar belongs to calm and peaceful fish. But do not forget that the scalars are still predators and in nature hunt the fry of other fish. Therefore, for joint content, you should not use species whose size in adulthood does not exceed a few centimeters. In addition, scalars become aggressive during spawning and drive away any strangers from the clutch.

Large viviparous fish – mollies, swordtails are well suited for keeping scalars in a general aquarium; labyrinth – gourami, lalius; catfish – corridors, thoracotomy, ancistrus. You can add a scalar to the iris. 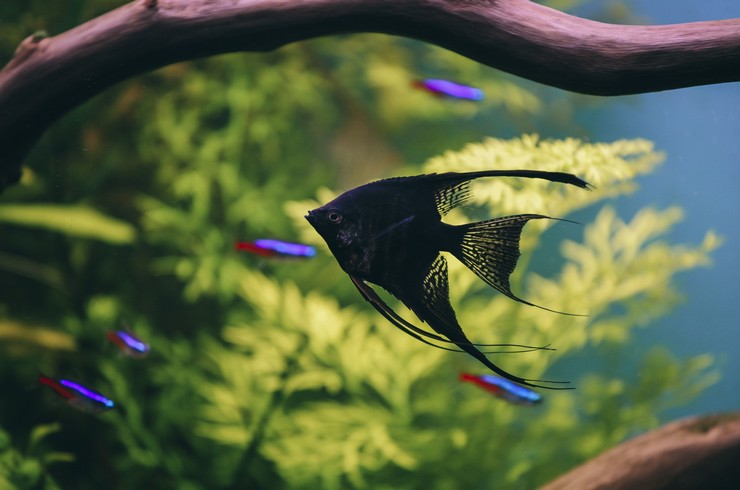 Bad neighbors will be barbs, which can nibble filamentous pectoral fins on scalars. Black scalar can also suffer from aggressive large cichlids. It is worth excluding the content of this variety with goldfish. Firstly, these species need completely different temperature conditions, and secondly, scalars will not mind biting the fins of slow, short-bodied golden breeds.

As neighbors, scalars are not suitable for very small characin ones, which can become their prey, although flocks of large tetras or minors often get along well with scalars.

Quality dry food is an ideal choice for feeding scalars in home aquariums. Unlike live and frozen, they are completely balanced, contain functional additives (for example, to enhance color) and vitamins, and cannot become a source of contamination of the aquarium with infections. In nature, scalars prefer protein foods, but do not mind pinching the tender parts of green plants. The more varied the diet of the scalar, the better the fish will feel. 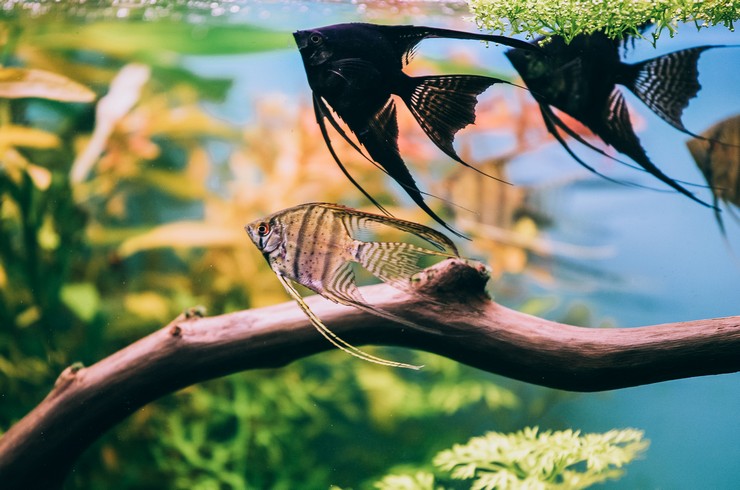 Black scalars prefer to feed on the surface of the water, less often in the middle layers of the aquarium. Taking these needs into account, the following dry foods are well suited for feeding black scalars:

The scalar must be fed several times a day with such a portion of food that will be eaten by the fish in a few minutes.

Breeding scalars is possible both in general and in a separate aquarium, but the second option will be more correct. With the onset of puberty, the scalars themselves break into pairs. For reproduction, you will need a spawning container with a volume of at least 80 liters. It is necessary to plant several bushes of deciduous plants (echinoderms, cryptocorynes) in it, which will become an excellent substrate for caviar.

Spawning is stimulated by a gradual increase in temperature to 28-30 ° C. First, the parents clear the future area for eggs, then start spawning. The female lays eggs on a plant leaf or other substrate, and the male subsequently fertilizes them.

Scalarians are caring parents. Both the male and the female watch the eggs, fan them with their fins and eat the dead eggs. The appearance of larvae occurs three days after spawning, but the next week they feed on the yolk sac, after which they move on to independent swimming and feeding. Parents protect their offspring and “walk” it.

As the fry grow, they are transplanted into a more spacious container and sorted. Sexual maturity occurs at the age of 10-12 months.