Border Terriers are the smallest hunters. However, this does not prevent them from being worse than others. The dog’s performance is excellent. To this day, English dogs are used in burrowing hunting. These dogs are tireless and hardy. Dogs are suitable for the role of an irrepressible companion, with whom you will certainly not be bored. 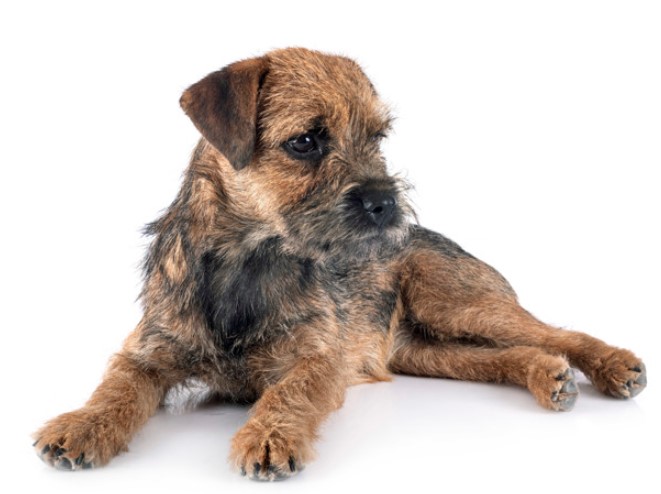 Seeing a pet for the first time, it is difficult to believe that the breed is a hunting one. Small size and cute decorative appearance add doubt. But in this case, the appearance is deceiving: the dog is very mobile and hardy. Otherwise, she could not keep up with the pack of horses and hounds. After the races, the dog still has enough strength to dig, climb, fight when capturing prey. Growth of miniature individuals up to 34 cm at the withers. The weight of the male is 6-7 kg, and the female is 5-6 kg.
The exterior of the Border Terrier has the following characteristics:

The breed can have three types of coat color:

The hair on the body of the animal is coarse and dense. The pets have a good undercoat. The breed must have a beard and mustache. Departure from this minimum description is considered a defect. 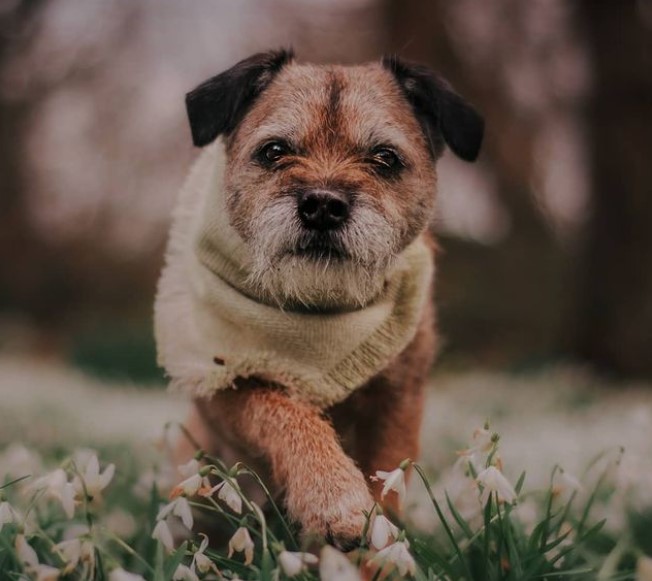 The breed appeared on the border of the two countries of England and Scotland, in a place that is considered a nature reserve with many beautiful hills. This place is called Вorder Country. This is where the name of the pet comes from. Borders were first mentioned in books about dogs, which were published in the 19th century (the 70s). The illustrations for the book depict hunters with prey and their faithful pets. Basically, these dogs were portrayed as a pack.

The breed first received recognition in England, in 1920. During this time, a Border lovers’ club was formed. To this day, dogs are popular in their homeland. Basically, Border Terriers are taken as a domestic companion and rarely – for the role of a hunter. 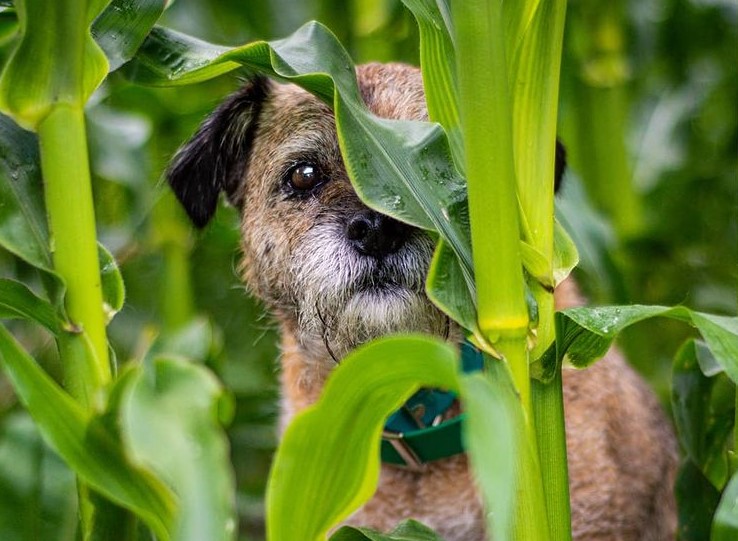 Border Terriers are active and cheerful dogs. They are cheerful and very well feel the mood of the owner. Dogs of this breed make good companions, favorites of the whole family. Borders are very intelligent and quick-witted dogs that get along well with children. They can frolic together for several hours in a row. Together with them, it turns out a cheerful, but noisy company. Borders treat guests at home calmly, they are friendly and happy to communicate with new people. Moreover, these pets are fearless and courageous. If the dog feels threatened, he will immediately defend his family in front of someone or something. This wonderful companion finds pleasure in any pastime with the owner. He will gladly follow with that for a run, swim in the river, study at the stadium, and so on. But most of all, the dog loves to play with him.

Externally, Border Terriers look like decorative dogs, but they have a very stable psyche, they are prone to analysis. This pet will not throw a tantrum, and in a difficult situation will be able to remain calm and attentive. His composure allows him to act correctly under any circumstances. Also, a pseudo decorative dog is a real hunter. Therefore, it is problematic to keep it in a house with small animals. Unless they grow up together.

The nature of the Border Terrier is docile and restrained. However, it is not a fact that he will always restrain himself, and one day he will not chase a domestic cat. Borders live well under the same roof as other dogs. By the way, in Europe, these miniature hunters have found a number of other useful vocations: they go to the service of hospices, nursing homes, orphanages, and hospitals in order to communicate with guests and improve physical and mental state.

Positive dogs can get bored if the owner does not deal with them for a long time. 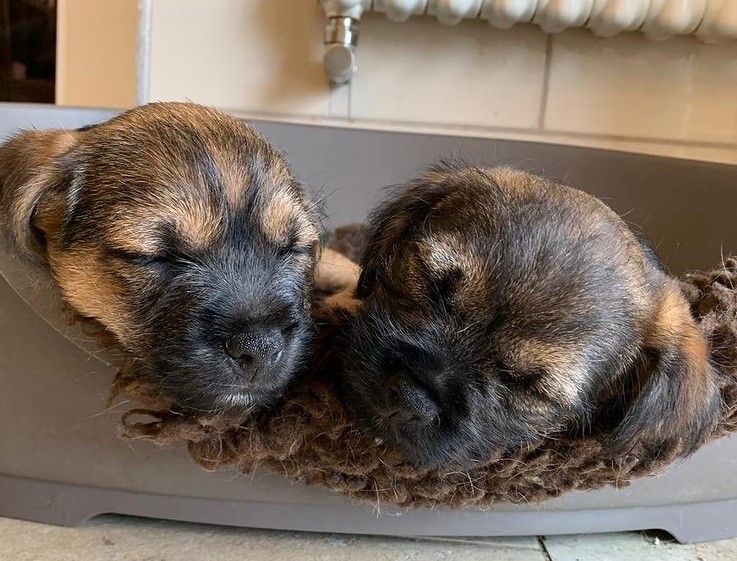 Border Terriers are not whimsical in grooming. Their coats require frequent trimming. The hairs need to be plucked so that new ones can grow. If this is not done, there will be a lot of wool in the house. Every 3 days the dog should be brushed out with a soft brush. Better not to do haircuts for the Terrier. Because after it, hair growth and wool structure are disturbed. And it will take a lot of time to update it again.

The dog’s eyes are examined every day, and the discharge is removed with a damp towel. Your pet’s ears are cleaned every week. To do this, cotton swabs need to be moistened with peroxide and carefully wipe the ears of the animal with them. These dogs love to run through bushes, thickets, and tall grass. Because of this, the risk of picking up a tick in them is increased by a hundredfold. It is important to take your pet outside in a special collar against parasites and treat the dog with special drops at least once a month. To keep your pet’s teeth strong and white, they should be thoroughly cleaned at least once every 3 weeks. Border’s claws are cut every 5 weeks. Bathe the dog as it gets dirty (no more than 1 time per month).

With proper care, a dog can live 15 years. 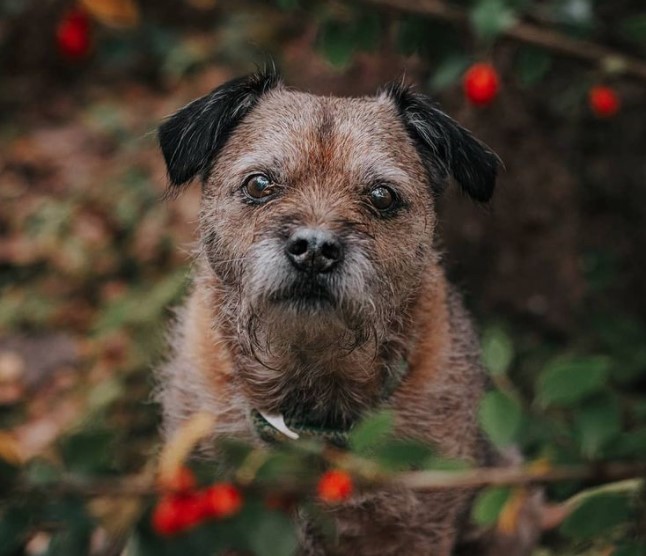 Border Terriers are a breed that came about naturally (without much intervention). Therefore, she practically has no genetic diseases. Their endurance does not even allow them to catch a cold.
Any wounds on the pet heal very quickly. But there is a small list of ailments that are somehow peculiar to this breed:

It is important not to forget to do antihelminthic prophylaxis on your pet once every 2-3 months. 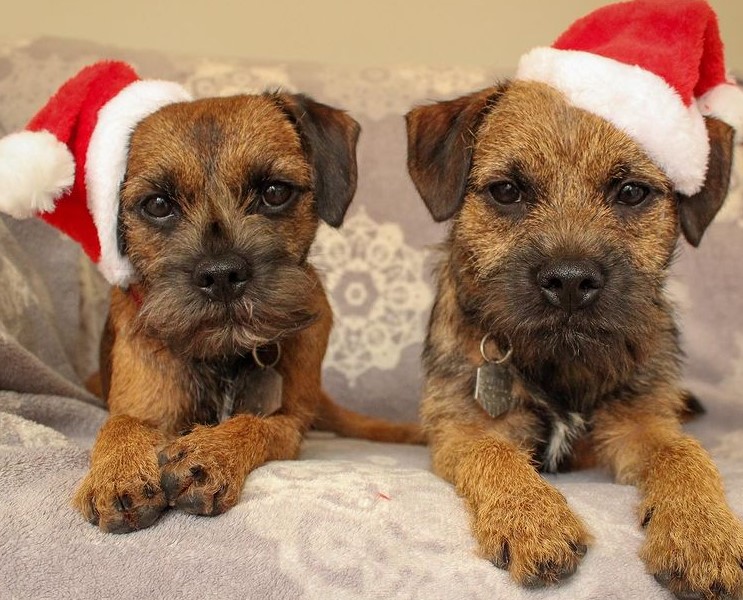 The Border Terrier gets along well not only in a spacious house but also in a small apartment. The dog needs running, physical activity, and long walks. It is important to remember the irrepressible energy of the pet and start it only for those owners who have enough time for the dog. The pet’s favorite pastime is playing with its beloved owner.