The crooked-nosed profile of Bracco Italiano undoubtedly has something of the ancient Roman patricians. The noble face, the haughty profile – everything gives the breed the features of the true aristocracy. Almost two millennia ago, Pliny described a hunt where dogs could show the place where the game was hiding, ancient frescoes that have survived to this day also present us with images of dogs very reminiscent of Bracco. It is possible that the first cop to do a bird stand was Bracco. And from her later came other representatives of this group: setters, shorthaired pointers, pointers. But Bracco itself, most likely, came from the ancient Molossians and Egyptian hounds. These are all assumptions, but it is unlikely that this breed was bred on purpose. For centuries, natural selection has led to the improvement of Bracco, which the Italians, and then the Europeans, appreciated. Even in the gloomy Middle Ages, Bracco puppies were considered a good gift to noble nobles. 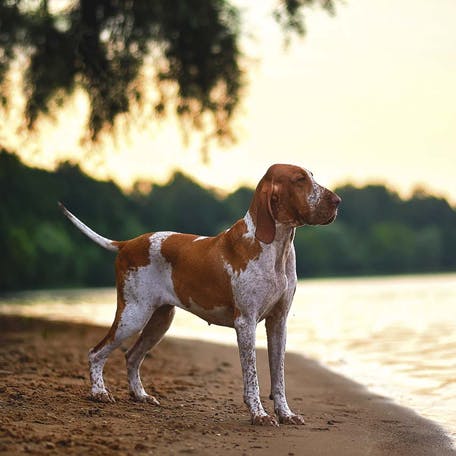 This breed is distinguished by its uniqueness and individuality. The Bracco Italiano is unlike any other breed. Strong, harmoniously built, muscular dogs give the impression of great physical strength. Bracco is characterized by a pronounced sculptural relief, ideal proportionality. The length of the body and the height at the withers practically coincide and range from 55-67cm. The weight of the dog with this height does not exceed 40 kg. The color is mainly light, against the background of which various spots of brown and dark orange shades stand out. A clever head with long drooping ears, a sadly restrained expression. This is an aristocratic dog, hunting with which requires appropriate ritual paraphernalia: expensive weapons, beautiful clothes, and other accessories that can turn the hunt itself into a real kind of spectacular action. Bracco does not move – she is dancing, and it is impossible to take your eyes off her elegantly graceful freeze in the stance. 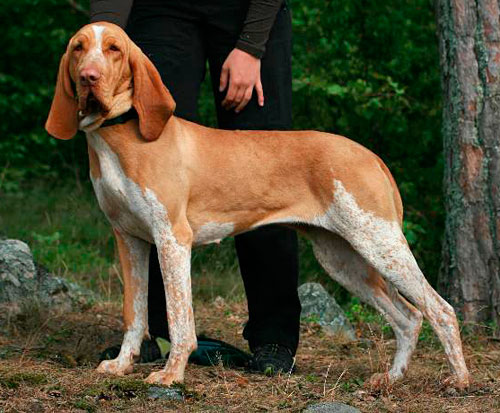 Bracco Italiano is distinguished by intelligence, ingenuity, cunning. If before the appearance of Bracco in the house there was no experience of communicating with dogs, then this graceful creature will not be difficult for an inexperienced owner to sit on his head and dictate his own conditions. This breed grasps everything on the fly, they perfectly perform actions that are inherent in humans: they open latches and hooks on doors, pull out boxes, putting things in order there in their own way, etc. If you chide them, they immediately begin to curry favor with a guilty look, asking for forgiveness. Faithful to people, Bracco prefers the company of a person to communicate with their own kind of dogs. They are easy to learn, and it is not necessary to encourage them with a delicacy, it is enough just to praise, stroking at the same time. This dog’s vanity greatly facilitates communication with them, because for a kind word and praise, they can work wonders. 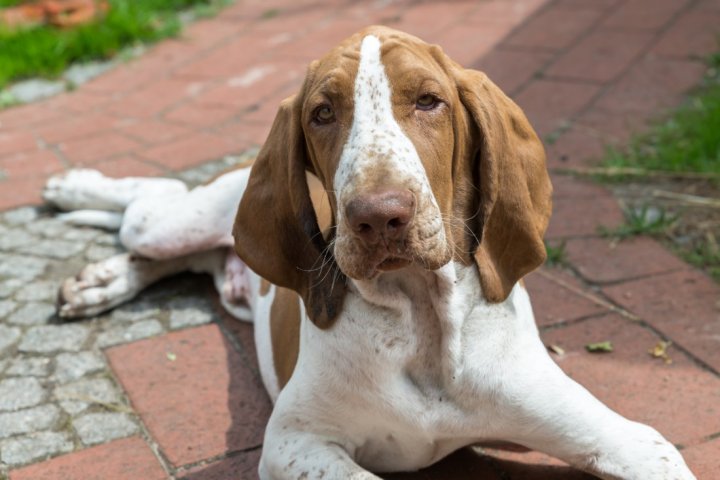 The choice of feed is a personal matter for the owner. Someone prefers to cook natural products, someone is an adherent of exclusively dry ready-made feed. If you have Bracco Italiano, then this is a different kind of difficulty. Sometimes these dogs begin to be stubborn and refuse their usual food, hinting to the owners that it is impossible to eat the usual food, but if it is replaced with fresh fillets, it will be completely different. It is important not to be led here, otherwise, feeling your weakness, Bracco will constantly use it.