Pugs are very small and cute animals that are ideal for keeping in an apartment. A funny face, a tail dashingly curled into a donut and a friendly disposition make this breed ideal for home keeping. There are several standard colors, as well as a number of colors that differ from the standard, which are no less popular than their relatives participating in exhibitions. One of these is the tiger-colored pug. 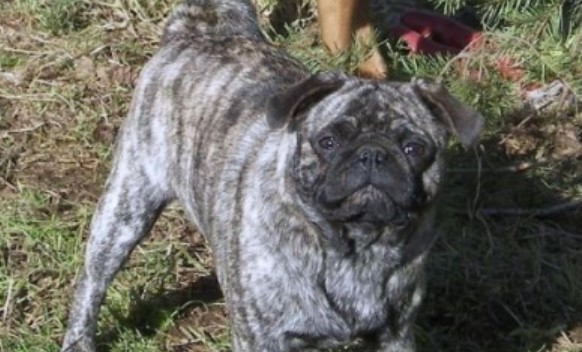 The ancestors of pugs lived in ancient China. Then they were considered a privileged breed and were a whim of emperors and other noble citizens. The thing is that the folds on the dog’s forehead folded into a certain figure resembling a hieroglyph. That is why the breed was even called at one time “imperial”.

Important! In the original version, the pug was a hunter of rodents and small fur-bearing animals, but later this function was lost.

Today it is just a very friendly and cheerful animal, following its master as a shadow. The bond to the owner is very strong. The pet does not require long and active walks but loves the company of family members in which it lives. A leisurely walk around the city is enough for a pug.

The brindle color of the pet, despite its unusualness and attractiveness for future owners, is considered a defect. The animal will not be able to have a show career and participate in breeding. But this does not detract from its merits, the animal is no less cheerful and loving.

The Exterior of Brindle Pugs

In appearance, a brindle puppy does not differ from its standard relatives. He has a dense coat, stocky, and very muscular body on small short legs.

Important! Brindle color is a rather dark animal hair, covered with almost black stripes. According to the pattern, the coat resembles a tiger, which is why the offshoot of the breed received such a name.

The brindle color is obtained by mixing two different colors that fall under the breed standard. However, breeders are not upset. Such puppies are always in demand, and often even more expensive than standard pugs.

Owners of brindle pugs claim that color defect has no effect on health and temperament. This is the same vivacious and active animal, as its standard relatives.

A small pet fits perfectly into a city apartment. It is small in size and does not take up much space. At the same time, he is very clean, does not shit, if he is properly taught to walk on the street.

The only drawback of the temperament of any pug is his persistence and stubbornness. Dogs of this breed get their way, even if it is something forbidden and the owner prohibits it. By any means, the animal tries to achieve the desired goal.

According to the approved standards, pugs can only have 4 shades. These are recognized colors, pets have the opportunity to participate in exhibitions and further selection.

Standard colors of the breed:

fawn (the brown or beige color is considered the most common, the animal’s muzzle and nose should be black);

black (the rarest and most expensive dogs of the breed, the coat is coal-black without red and white blotches);

“Deer in the moonlight” (beautiful, multifaceted color, silvery with a slight hint of beige, the color has recently been recognized by experts at exhibitions).

In any color, pugs are considered very attractive pets in urban settings. They are very fond of children and take root well in families with babies, arranging naughty games. For older people, pugs can also make great companions, walking leisurely through the streets and lying together on the couch in front of the TV.