Bottom fish from the Armored catfish family are the real favorites of aquarists because they not only revive the bottom layer of the aquarium but are also a kind of soil orderlies, eating up uneaten food debris from other aquatic inhabitants. Many of them also have a stunning color, like the hero of our article – the emerald bronchitis.

Emerald brochis (Corydoras splendens) is a freshwater ray-finned fish from the Armored catfish family. At present, the species is assigned to the genus Koridoras, but in the old fashioned way in many places the fish can be found under the name “brochis”. The catfish lives in South America.

Corridoras brochis is an attractive and easy-to-care fish. Particular attention is drawn to its emerald body with a characteristic metallic sheen (for which the fish received its Russian specific epithet). Like other corridors, this catfish is an excellent assistant to the aquarist, eating up all food debris that sank to the bottom and were not eaten by other fish. This reduces the risk of excess organic matter accumulating in the aquarium. 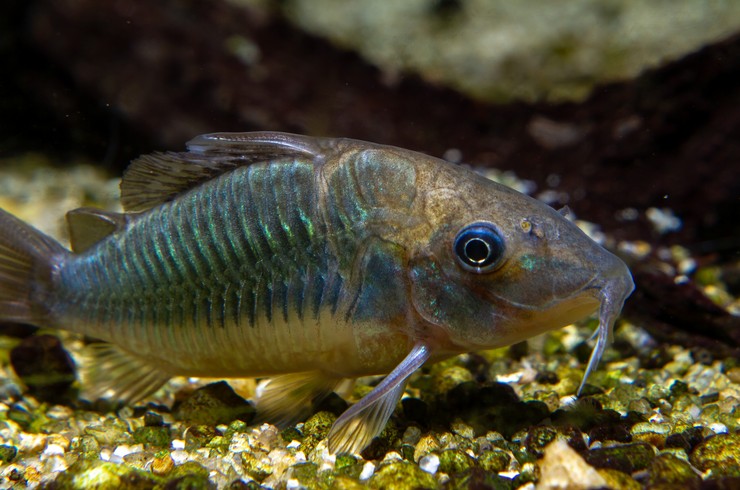 One of the fascinating features of the emerald brochis is its intestinal breathing ability. A special section of the catfish intestine has a dense network of blood vessels and is used as an additional respiratory organ. If you pay attention, you will notice that the brochis corridor periodically rises sharply to the surface, takes a breath of air and sinks to the bottom. It is important to remember that if the catfish begins to float very often, it means that there is not enough aeration in the aquarium or the water quality has deteriorated.

The emerald brochis is a peaceful species, so it is well suited for general aquariums. And breeding fish at home is not particularly difficult.

Emerald brochis is a medium-sized fish. An adult usually has a size of 7-8 cm. If you look closely, you will notice that the muzzle of this catfish is sharper, and the body is thicker than that of other corridors. However, the fish also have a lot in common: bony plates along the body, 6 pairs of sensitive antennae around the mouth, which help to search for food, as well as hard spines on the pectoral and dorsal fins. With them, you especially need to be careful when catching fish, the corridors can get tangled in the net. Surprising fact: with the help of friction of the pectoral fins, brochis are able to make sounds, as a rule, they can be heard when the fish are frightened or during spawning. 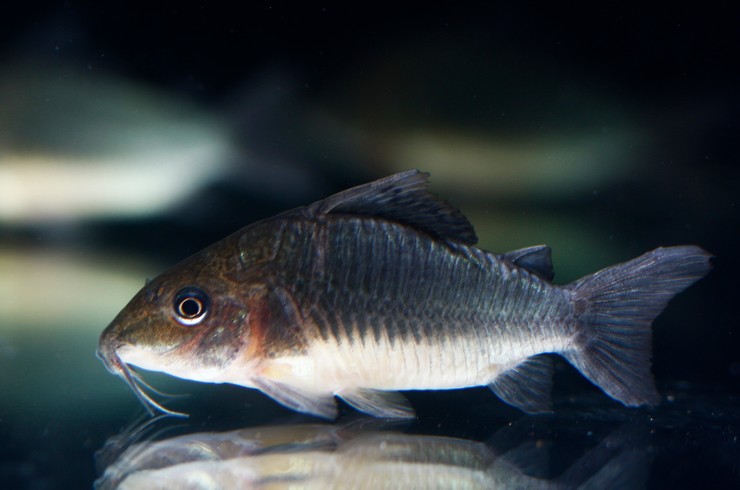 The homeland of the emerald brochis is South America. The species is widespread in the tropical part of the mainland; it can be found in Brazil, Colombia, Ecuador, Peru.

Most often, catfish are found in shallow backwaters, marginal lakes, oxbows. In such biotopes, highly silted soil and dense thickets of plants. Due to the large amount of organic matter, the content of oxygen dissolved in water often drops sharply. It is here that intestinal breathing comes to the aid of the brochis. Fish keep in groups. 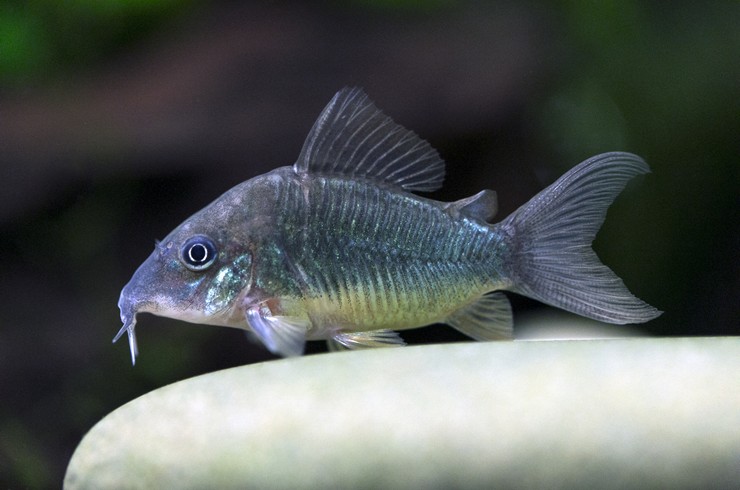 Best of all, emerald brochis feel in the company of their relatives, so it is better to have at least 4 catfish. In this case, you need an aquarium of 50 liters or more. The soil should be given special attention: it should not have sharp edges or be too large. Rounded pebbles or coarse sand work well. It is better to use natural stones and driftwood as decoration. It is important to organize more shelters, in which the catfish can easily hide if something disturbs them. 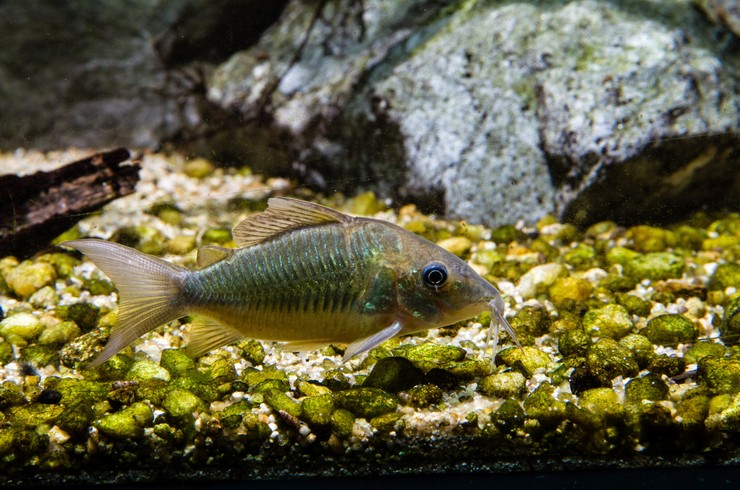 The aquarium should be equipped with a suitable filter and aeration system. Change 20% of the water weekly to fresh water to prevent the build-up of hazardous metabolic products. If you use tap water, there is a risk of poisoning your pets, because the quality of tap water is sometimes far from ideal, it may contain chlorine and / or heavy metals. In order not to worry about the well-being of your catfish, use Tetra AquaSafe conditioner with every water change. It instantly makes fresh water suitable for fish life. Dosage of the drug: 5 ml for every 10 liters of water.

Emerald brochis thrive in the company of other fish and will never harm anyone. Catfish will get along well with any peace-loving species: zebrafish, tetras, barbs, rasbora, apistograms, irises, mollies, scalars.

You should be careful when organizing life together with other benthic species: battles, girinoheilus. Sometimes there are skirmishes between the fish. 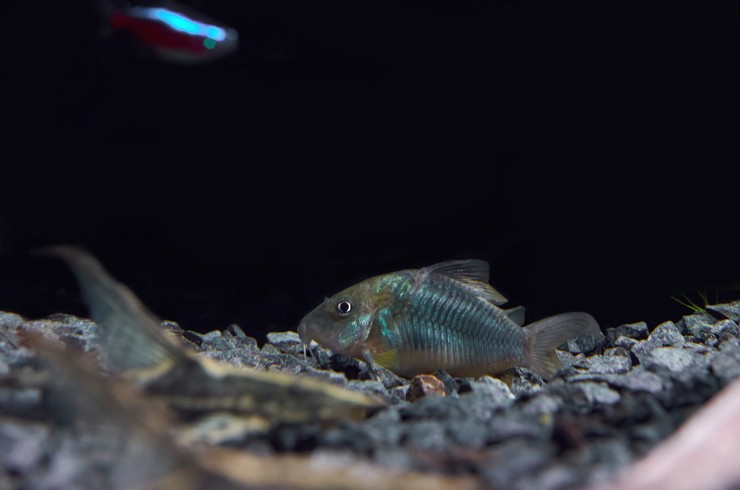 It’s no secret that the corridors eat up the remains of food that sink to the bottom and are not eaten by other fish. But this moment does not at all exclude the need to additionally feed the catfish. By their nature, brochis are omnivorous, so it is necessary that their diet contains products of both animal and vegetable origin. In addition, the food must quickly sink to the bottom so that the fish swimming in the water column do not have time to eat it. Therefore, the best option for feeding brochis catfish will be high quality Tetra dry food. You can use specialized food in the form of dense plates Tetra Cory, or universal food for all types of bottom fish – Tetra Tablets TabiMin or Tetra WaferMix.

Brochises are not the easiest fish to breed, but with a little experience and patience, you can get offspring of these emerald catfish. Sexual dimorphism is very weakly expressed, therefore, it is rather difficult to distinguish a male from a female. As a rule, females are larger than males and have a pinkish abdomen (in males it is yellow). But given that the fish should be kept in groups, at least one pair of individuals of different sexes is usually present.

Natural spawning of emerald brochis begins during the rainy season, so it is necessary to simulate similar conditions in the aquarium. It is best to use a separate container, and two weeks before the start of the process, the male and female should be seated and abundantly fed. Mating games will be stimulated by a slight drop in temperature and frequent soft water changes.

If everything goes well, the female lays eggs in an amount of up to 1000 pieces on stones, plants or glass. After that, the producers should be removed, and antifungal drugs should be added to the water, because brochis caviar is prone to fungal attack.

Incubation lasts about 4 days, then small larvae appear, which, after another two days, switch to self-feeding. Emerald brochis fry are sensitive to water quality and require daily changes and removal of uneaten food.

Already at the age of 10 days, catfish begin to show emerald shades in color, but the fish are completely colored only closer to two months.