Whether streaming or classic TV – many cats are part of the party! When we cheer on action thrillers, sob over love smacking, or cheer over football: our cats are there. But what do our four-legged roommates even get from television?

Contents hide
1 What Do Cats See When They Watch TV?
2 Videos or TV Shows That Cats Love

What Do Cats See When They Watch TV? 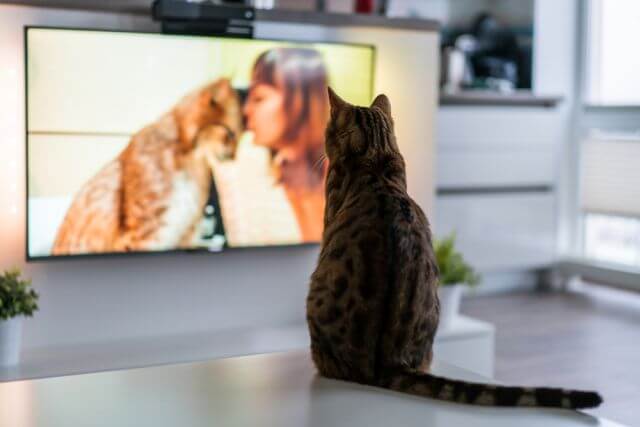 The cat’s perception is fast – much faster than ours. That is why television is only interesting for cats with a frame rate of 50 Hertz or more. Everything below appears to the nimble huntress like stills lined up.

On modern devices, cats react primarily to the movement itself and to the sounds: if you show a still image of a mouse, it is not interesting. But if she hears a quick and sees the outline of a potential prey moving, that can change.

This is similar to playing with the feather duster: rustling and movement are enough to get the cat’s attention. We, therefore, assume: yes, cats recognize moving images, what exactly can be seen is probably hidden from them. So if you watch a horror movie, you don’t have to worry about the cat having nightmares afterward.

This explains, for example, the video of a cat that runs away in panic after looking at the screen. On the TV you can see a huge puma leaping forward. The cat does not recognize the puma as a special predator. But what the cat sees is threatening enough: an indistinct, large something that seems to jump towards it from the screen above it. No wonder that she prefers to keep her distance as quickly as possible. Learn more about how cats see the world here.

Very few cats find a talk show like Maybritt Illner or Anne Will exciting. If you like to watch TV, then preferably programs with lots of understandable movements. It can be a soccer game in which the ball is clearly recognizable as an exciting detail.

Sports without fast-moving details, such as cycling or swimming competitions, are less interesting. Some cats find games on PC monitors or TV screens exciting. Fast jump-and-run games, in particular, can tempt them to want to take the matter into their own hands.

If you want to offer your cat a special treat, you can choose from some special videos for cats on the Internet. How about, for example, a video with a lot of mice, especially intended for cat viewers? The little rodents flit across the screen and make every TV fan curious! As with humans, the following applies to cats: The telly is only harmful if you spend too many hours in front of it. But do the sensitive ears of your cat a favor and set the sound to the room volume.