One of the most frequently asked questions about dogs is the question of color discrimination. Most often, you can hear that dogs simply do not distinguish colors, but this is a wrong judgment, as well as the fact that dogs are not able to see all colors, but only shades of gray. In fact, dogs are capable of distinguishing colors, but they do not see them as brightly as most people see them.

Dogs’ eyes, like humans, have special light-sensitive receptors called cones that help distinguish colors. Dogs have fewer cones than humans, so the colors they perceive are not as saturated as we see them. And yet, the ability to distinguish colors depends not only on the presence of cones but also on what type they belong to since each of these types helps to perceive different wavelengths. Humans have three different types of cones, which together enable a person to perceive the full range of colors. 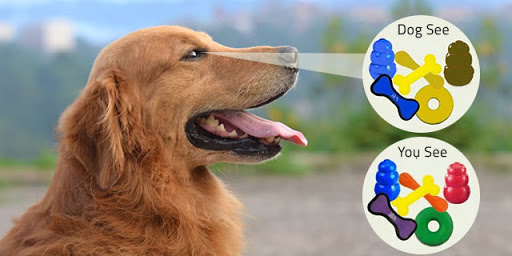 One of the most common types of color blindness occurs in humans when one of these types of cone receptors is missing. And even in this case, a person does not lose the ability to distinguish colors, he simply perceives a smaller number of them (when compared with a person with normal vision). The same thing happens with dogs, as they only have two types of receptors.

Jay Neitz, from the University of California, Santa Barbara, tested dogs’ ability to distinguish colors. In most research tests, dogs were shown three light panels in a row, two of which were painted the same color and the third was different from them. The task of the dogs was to find exactly the panel that was different from the others and click on it. If the dog made the right choice, it was rewarded with a treat, which the computer automatically dispensed into a bowl under the panel.

Neitz proved that dogs are actually able to distinguish colors, but in a lesser amount than, for example, ordinary people. For example, the colors of the rainbow – purple, blue, cyan, green, yellow, orange, and red – dogs can see in this correspondence: dark blue, light blue, gray, light yellow, dark yellow (a kind of brown) and very dark Gray. In other words, dogs distinguish all colors in basic shades of yellow, blue, and gray. They see green, yellow, and orange as yellowish, and purple and blue as blue. They see blue as gray. 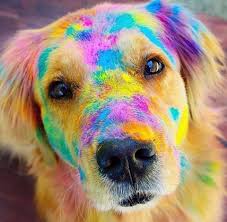 Very funny and even bizarre is the fact that the most popular color of modern dog toys is red and bright orange (the one in which cones on the road and life jackets are painted). But it is quite difficult for dogs to distinguish red from the rest. They see it in dark shades of brown or even black. This means that a dog toy that is so noticeable to you may be almost invisible to your dog. This also means that when your pet runs past the toy that you threw him, he does not show stubbornness by this and does not do it out of stupidity. There is a possibility that you were the one who made the mistake when choosing the color of the toy, and this makes it very difficult for the dog to find it on the green grass of the lawn.