The snow-white color of the coat is characteristic of many breeds of dogs. Many people prefer to take pets with white fur into the house. They find them to be more attractive and visible. What about those looking for a French Bulldog with white fur? Will they be able to find a puppy with a similar appearance?

Does the Breed Standard Include White? 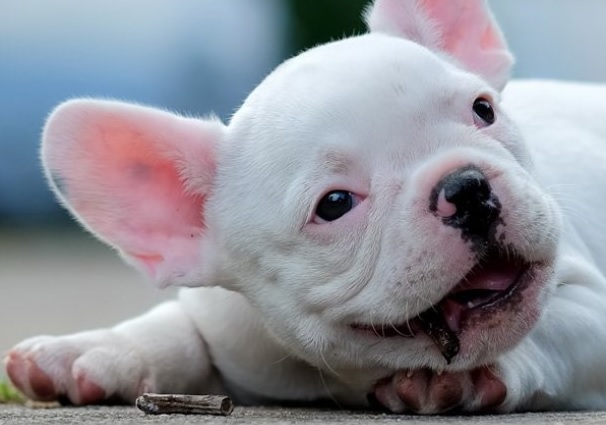 French Bulldogs are a fairly well-known and common breed. They have quite a few coat color options. So, according to the standard approved for their appearance, the “French” can be:

Fawn. This color includes all shades of coffee and red. Some dogs may have a mask on their faces and/or white spots on their torso.

Brindle. Quite a common “color”, which is considered one of the most popular. The background can be both light and dark shades. These are mainly black stripes on a red background and vice versa. Sometimes you can find dogs in which the main color of the coat is white.

Spotted. So, most often there are French Bulldogs that combine black and white in their color. The main one can be either the first or the second.

As you can see, pure white is not included in the standard. However, in some litters, it is quite possible to find such a puppy. Only those dogs, whose noses and nails are painted in a dark color, can be admitted to the dog show. If the dog has a light nose, the white color of its coat is a manifestation of such a genetic abnormality as albinism.

Important! Albino dogs are not allowed to take part in dog shows, breed breeding. They may have health and behavioral problems. They usually live 3-5 years less than their standard counterparts.

Those dogs that do not suffer from albinism may also have certain health problems. So, it is noticed that their immunity is much lower. They may have a tendency to develop deafness or be born deaf.

In addition, dogs with light coats need more careful grooming. It is necessary to better monitor the condition of the coat, as it can turn yellow over time. Bulldogs with white fur should not be allowed to stay in direct sunlight for a long time – they can get burned.

Otherwise, French Bulldogs with snow-white fur are no different from their brindle and spotted counterparts.