It is officially recognized that Caucasians descended from the ancient Great Danes that lived in Tibet, the genetics of which is present in all mastiff-like dogs of Asia.

Another version refers to the ancestors of this breed of dog shepherds who came to the Caucasus from Central Asia in the third millennium BC. There is an opinion that it is wrong to call Caucasians shepherds since this breed has never performed the functions of only sheep “shepherds”, its duties included the protection of the flock, without the order of the shepherd. Many shepherd dogs of other breeds were not able to protect sheep not only from predators, but also from strangers, and the Caucasian Shepherd Dogs perfectly coped with this task, zealously guarding the flock’s habitat and localizing the flock under its control in a certain territory.

The Origin of the Caucasian Shepherd Breed 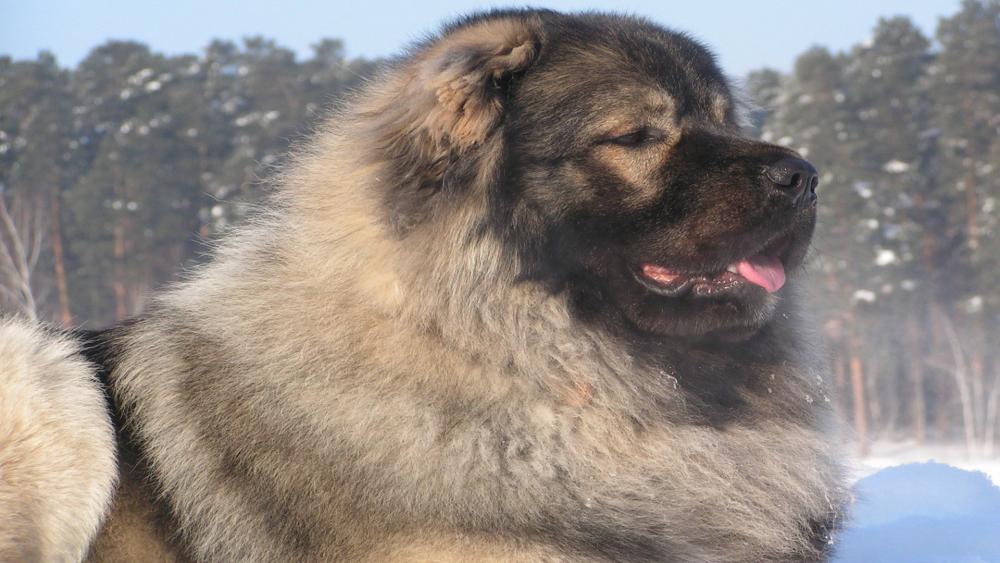 When the shepherd dog of Asian shepherds came to the Caucasus region, under the influence of local factors, there were changes in its behavioral characteristics and appearance, which led to the final formation of the breed. This was affected not only by the climatic conditions different from those in Asia but also by the geographic isolation of the region from the outside world inherent in the Caucasus. Countless enemies of the peoples of the Caucasus sought to conquer the “crossroads” between Europe and Asia, and endless wars obliged local peoples to teach their pets to mistrust, wary attitude towards uninvited guests, showing aggressiveness and even malice towards strangers.

In ancient times, shepherds, one might say, carried out selection work, carefully selecting for their assigned tasks dogs capable of performing the difficult work of protecting the sheep and the shepherds themselves. First of all, dogs were selected with a keen sense of smell, keen hearing, and good eyesight, so that the dog “shepherds” could sense the approach of a predator or stranger from afar.

The second, no less important requirement for the Caucasian Shepherd Dog was the presence of strength, mobility, courage, and tolerance for pain so that in a fight with a wolf the dog “shepherd” would not pass up and finish off the predator. This required complete submission of the dog to the shepherd, whom the Caucasians had to unconditionally recognize as the “leader” of the pack, and the ancient shepherds made the dogs become attached to the territory, suppressing their hunting instincts.

A prerequisite was also such qualities as endurance, unpretentiousness in food, the ability to endure thirst, the ability to independently make decisions while guarding the territory entrusted to the dog.

All these qualities, which the ancient “breeders” achieved from generation to generation, were firmly entrenched at the genetic level and have been inherited by dogs of this breed for more than one century. As a result, a breed of universal guardians was born, which fearlessly and uncompromisingly guard their owners, dwellings, and livestock.

An important role in the history of the Caucasian Shepherd Dog breed was played by dog ​​fights, from time immemorial conducted in the Caucasus and Asia. The purpose of the dog fights was to identify the strongest and most resilient young dogs that would be able to resist the predator, despite the pain caused to the shepherd during the fight. This unmerciful technique helped the shepherds to select suitable for the protection of flocks of dogs, and this folk “selection” gave amazing results, forming the breed characteristics of the physiology and psyche of dogs.

Fearlessness, strong-willed qualities, and tolerance for pain, Caucasian Shepherd Dogs also showed in human war. In Asian military units, they were used as full-fledged combat units. So in the annals of Assyria, wars with Urartu are described, in which huge fighting dogs played an important role on the battlefields. In the Russian-Turkish war, the Turks also used fighting dogs, and the Caucasian Shepherd Dogs always acted in the vanguard in front of the advancing detachments of people.

The last stage in the history of the formation of the Caucasian Shepherd Dogs was the era of the formation of the USSR when the young state was in dire need of service dogs. Security and guard service made certain adjustments in the selection of puppies for future service. Then they selected large, strong individuals and brought up aggression towards humans in them. It was these dogs that served as the “foundation” for the emergence of the factory variety of this breed.

For the first time, they started talking about the breed at the beginning of the twentieth century after the All-German exhibition in Nuremberg, where these dogs became a sensation for the cynological world. A few years after the exhibition, special nurseries began to be created in which this breed was bred.

The Caucasian Shepherd Dogs received world recognition in 1990, and the breed was registered with the International Cynological Association.

The head of the Caucasian Shepherd Dog is present on the coats of arms and generic symbols of some princes of Georgia.

The wolfhound, this legendary large dog, is essentially the Caucasian Shepherd Dog, which has long been taking an active part in hunting wolves.

In Russia, in 1765, a decree was issued, which stated that representatives of the breed must necessarily be involved in guard duty in all military fortresses.

Until the end of the nineteenth century, animals were bred in isolation, which made it possible to preserve the purity of the breed.