Chrysiptera para soma (Chrysiptera para soma) is a very beautiful tropical fish belonging to the pomacentral (reef) fish family. It is also called the fish-girl. In its natural environment, it lives in coastal lagoons, coral reefs in the Western Pacific, and in eastern Indian. Distributed in the waters of the Philippines, New Guinea, the Solomon Islands, Ryukyu Islands.

Appearance and habits of yellow-tailed chrysipters

Chrysiptera has an oval-shaped body flattened from the sides and a pointed muzzle. On the head, there are very large eyes with black or bright blue irises and small nostrils. The mouth is at the tip of the muzzle. The body is covered with large scales, often their edges are marked with a strip or colored dot. The dorsal fin is very long, the soft and spiny parts are sometimes separated by a notch. Chrysiptera blue yellow-tailed has a very beautiful blue body color with a contrasting tail of bright yellow. This color looks amazingly beautiful against the background of corals and living stones. The color of the fish is enhanced by neon lighting.

Chrysiptera males are larger and slender than females and reach 7 cm in length in natural conditions. In aquariums, they rarely reach this size. Males become aggressive towards females when preparing to mate. After spawning by females, Chrysler males become very territorial and are responsible for the preservation of eggs. Males very jealously protect their future offspring, with their fins pump fresh water to the place where the eggs are laid, with their mouths they remove dead eggs and organic waste. After the appearance of the larvae, the male stops caring for the offspring. 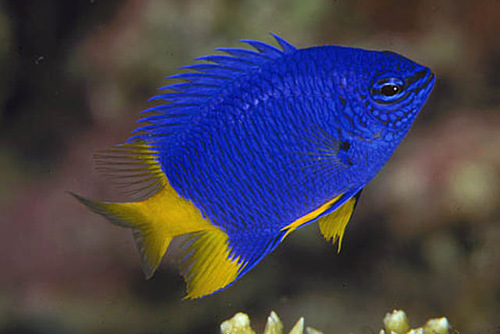 Rules and conditions for keeping Сhrysipters in aquariums

Chrysiptera is suitable for those who are just starting to breed aquarium fish, as it is distinguished by its unpretentiousness and endurance. Ideal as a first inhabitant if you want to start an afresh marine aquarium. When choosing fish, you should pay attention to the color of their body, it should be bright blue, the tail should be bright yellow, all fins should be intact. If the store kept chrysipters in large aquariums, then you should not buy specimens with signs of damage, which were clearly pursued by more aggressive fish.

For a comfortable living, you should know some of the features of the content of chrysipters: