If you firmly decided that you want to keep cichlids from Central America in your aquarium, but do not know who to choose, then be sure to pay attention, not to Meek’s cichlid. This unpretentious and very beautiful fish will become a real decoration of your aquarium, and it will give you the opportunity to observe fascinating behavior and, if desired, get offspring. We will tell you how to create ideal conditions for this fish in our article.

Cichlazoma Meek (Thorichthys meeki) is a freshwater ray-finned fish from the Cichlov family. Like many other species, at one time referred to as the genus cichlazoma, fell under the global revision of the family and was transferred to the genus Thorichthys. However, the historical name stuck and is still used today. Also, the fish can be found under the following names: redmouth cichlazoma, masked cichlazoma.

The fish is named in honor of the American scientist-ichthyologist who compiled the first book about fish in Mexico – Seth Eugene Mika (Meeka).

Meek’s cichlids are one of the most popular cichlids in the aquarium hobby due to their unpretentiousness and beautiful appearance. The “trick” of cichlazoma is the throat, painted in a deep red color.

The fish is characterized by medium aggressiveness, it is able to get along with many commensurate species, except for the spawning period, when the cichlid becomes not itself.

The maximum body size is 17 cm, but in aquariums, the length is usually around 12 cm.

The main body color is silver-gray with purple tints, you can see dull dark transverse stripes. A large black spot is located in the middle of the body, the same ones are found on the operculum. Fins, with the exception of transparent pectorals, with iridescent blue stripes. 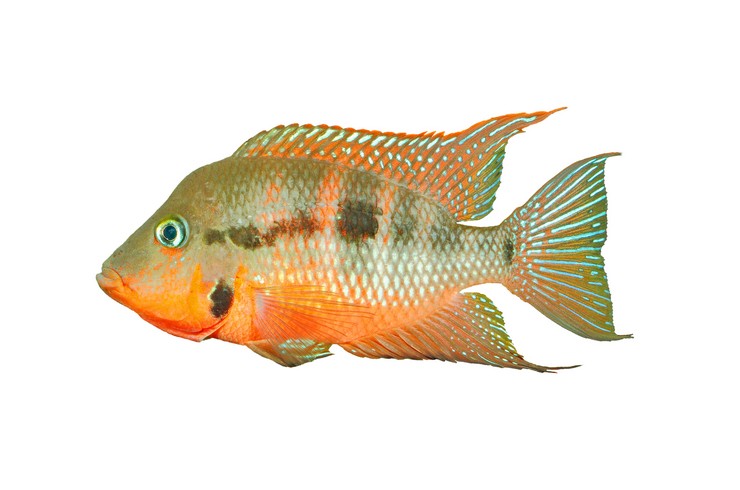 The main feature of Meek’s cichlazoma is the bright red coloration of the lower part of the mouth and head. It is especially bright in males during the spawning period.

An interesting fact: in case of danger, Meek’s cichlazoma bulges out its bright gills with black spots resembling pupils. This technique often frightens the enemy. For such a sharp change in its appearance, the cichlid is called a mask.

The natural range of Meek’s cichlazoma includes the entire territory of Central America. The fish can be found in Mexico, Guatemala, Nicaragua, Costa Rica, Panama, etc.

The fish prefers shallow (up to 1.5 m) biotopes with a muddy or sandy bottom. Cichlids float mainly in the lower and middle layers of water. They keep near dense thickets of plants, where they find food for themselves. The current is moderate.

Fish often swim into the mouths of rivers flowing into the oceans, so they easily adapt even to a slight salinity of the water. 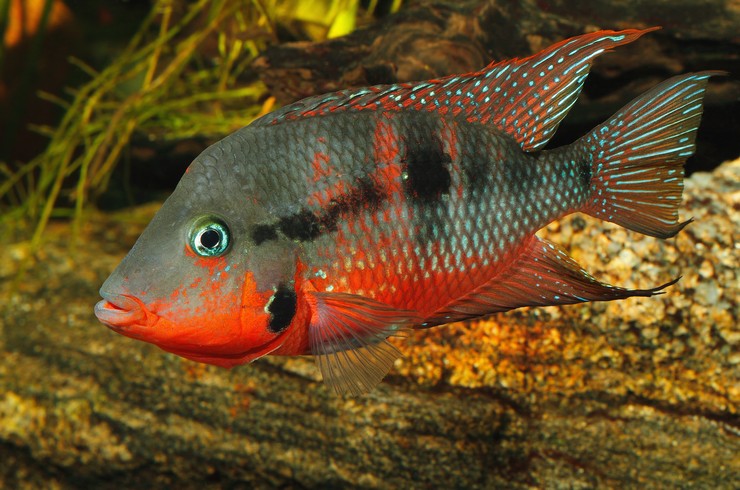 To keep a pair of cichlases, you need an aquarium of 150 liters or more. It should be covered with a lid so that active fish do not accidentally jump out of it.

The ideal soil will be coarse river sand, covered with a thick layer (8-10 cm). The fact is that Meek’s cichlazomas are very fond of digging the ground and even dig nests for caviar in it. Small rounded pebbles will do. It is very important to organize a lot of shelters in the aquarium – each fish should have its own “secret” place. Stones, driftwood, grottoes, ceramic pots, and coconut shells are suitable for these purposes. 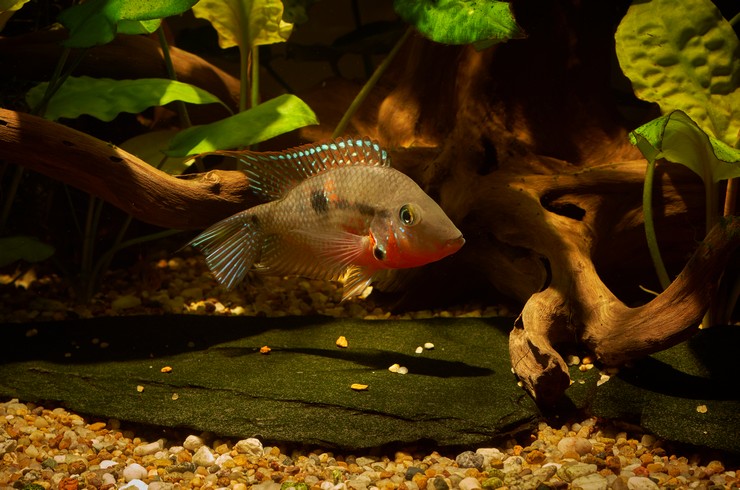 The lighting is recommended to be moderate. Of the plants, only hard-leaved species (anubias, echinodorus, cryptocoryne, etc.) are suitable for keeping. Moreover, those of them that are planted in the ground are best placed in separate pots – this will exclude their digging up by cichlids. Meek’s cichlazomas are omnivorous, they can pluck the delicate leaves of aquatic plants. It is better to arrange plants along the walls, leaving space in the center for free swimming.

It is important to ensure that your aquarium is well filtered and aerated. A good external filter and a powerful compressor will help you with this. Once a week, you need to change 20% of the water in the aquarium. It is very important to add Tetra AquaSafe conditioner to the freshwater for a change, which instantly removes chlorine and heavy metals and adds vitamins and natural colloids to the water.

The nature of Meek’s cichlazoma can be described as dual. On the one hand, this is a non-aggressive fish that gets along well with medium and large species: serums, black-striped cichlazomas, large scalars, young astronotuses, and acars.

However, if Meeks have begun spawning, then they pose a real threat to other fish. Protecting the offspring, the fish attack and pursue any strangers who approached the clutch. Sometimes it ends in the tragic death of the aquarium neighbors. In this regard, if you find that Meek’s cichlazomas have decided to become parents, then the couple urgently needs to be seated or removed from the neighbors in another container.

You can keep fish in a group or a pair.

The natural diet of Meek’s cichlazoma is varied. It includes insects and their larvae, worms, small crustaceans, as well as living plants. This omnivorous fish needs to be provided with a nutritious and varied diet. It is better not to give live and frozen food to cichlazomas. They do not fully provide them with nutrients, and in addition, can introduce infection into the aquarium.

Best used for daily feeding with quality dry cichlid food from Tetra. They contain all the necessary proteins, fats, and carbohydrates for the proper growth and development of fish, as well as a complex of vitamins that support health and ensure longevity.

Alternating between Tetra Cichlid Color Pellets and Tetra Cichlid Algae Mini Pellets is a good option – the former contains natural color enhancers that will brighten your pets’ throat spots. The second will help to fully satisfy the fish’s need for plant food, due to the high content of spirulina algae.

It is also well eaten by adult cichlids and universal food for cichlids, for example, Tetra Cichlid Sticks or Tetra Cichlid Crisps.

Feed the fish in small portions several times a day.

Natural treats in Tetra FreshDelica Nutritional Jelly will help you to add variety to your daily diet. You can pamper your pets with bloodworms, daphnia, krill, or brine shrimp. 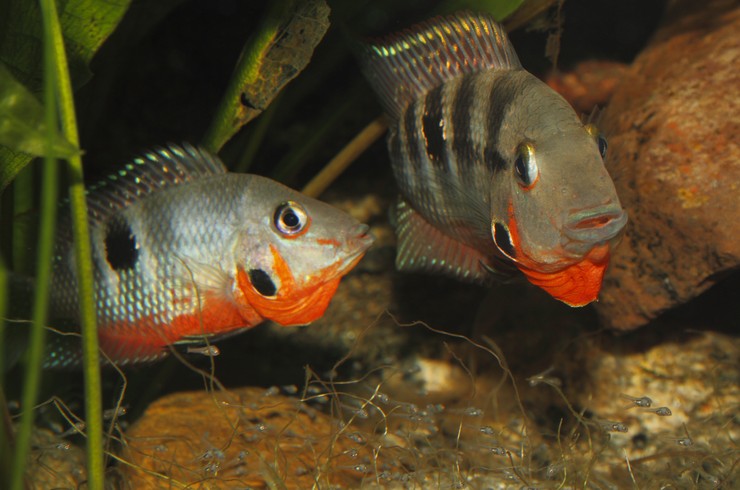 Cichlazoma Meeka refers to fish from which it is enough to simply get offspring. These cichlids are monogamous and form very strong alliances for years to come.

Meek’s cichlazomas can spawn several times a year. Fish become sexually mature at the age of 8-10 months. During this period, Meek’s cichlazomas become unusually aggressive, so they are not recommended to be kept in a general aquarium during breeding.

Cichlosoma females are very fertile. In one spawning, they can lay up to 500 eggs. The substrate is usually a flat stone, ceramic pot, or even aquarium glass. Meek’s cichlazes are characterized by pronounced care for the offspring. Responsibilities are divided between the parents: the female is responsible for the ventilation of eggs and destruction of damaged eggs, while the male patrols the area and drives away intruders.

Egg incubation usually takes 3-6 days, then larvae are born, feeding on the yolk sac. At this stage, the parents take them to a place that is safer in their version. Usually, this is a hole dug in the ground. The fish switch to self-feeding after 4-5 days. Parents protect their offspring all this time.

As the fry grows, sorting is necessary to avoid eating each other.

It is worth noting that Meek’s cichlazoma is capable of interbreeding with the popular black-striped cichlahzoma, so their maintenance is a general aquarium is not always rational.