If you are interested in terrarium keeping and would like to try your hand at this area, the easiest place for you to start is with Corn Snake (Pantherophis guttatus). This is a great choice for hobbyists because this snake is very easy to care for, and therefore ideal for novice breeders. 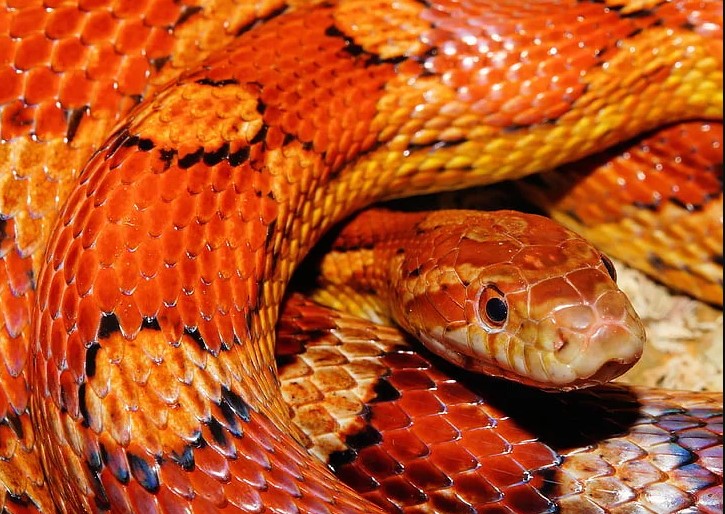 Popular among terrarium hobbyists, Pantherophis guttatus, also called Corn Snake, Spotted Climbing Snake, and Red Rat Snake. Each of these common nouns of the species has its own history of origin.

There are several hypotheses as to why the species became corn. The main version is that these snakes are often found in cornfields or near granaries, where they hunt their main prey – mice and rats. However, there is a version that they were named so due to the fact that on the belly of the Corn snake we can distinguish a white and black checkered pattern, reminiscent of corn on the cob.

The species became the Red Rat Snake due to the fact that it is rodents that become its predominant prey, and also due to its rather bright color. In nature, it is usually brick-brown or red-orange in color with dark spots or stripes along the snake’s entire body.

Every year breeders breed new morphs of these reptiles, which differ greatly in color, pattern, scales. In addition, there are hybrid species that are bred mainly in artificial conditions. In nature, crossings, if they occur, are mainly only between species of the genus Pantherophis.

The size of the Corn Snake averages 70-120 cm. The size and color strongly depend on the reptile habitat.

Origin and Habitats in Nature 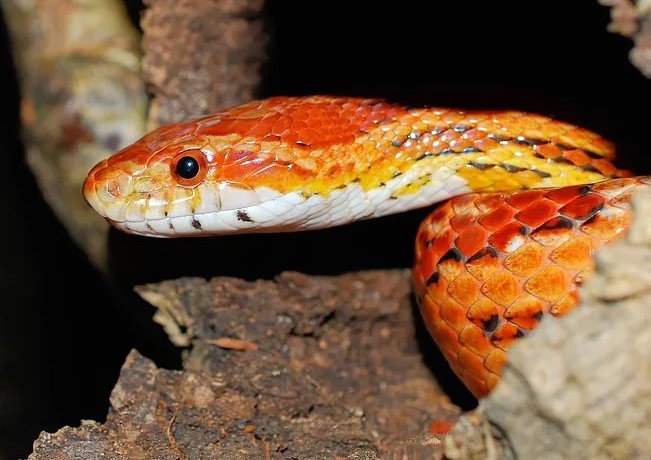 Corn Snake is found throughout eastern and south-central North America, as well as northern Mexico.

It can be found in a wide variety of habitats, the snake prefers deciduous forests and rocky regions, in such places, there are many crevasses that provide reliable shelter. They can also be found in fields, grassy meadows, near houses, and barns. This species has been found in mountainous areas at an altitude of about 1800 m, but generally prefers lower regions. 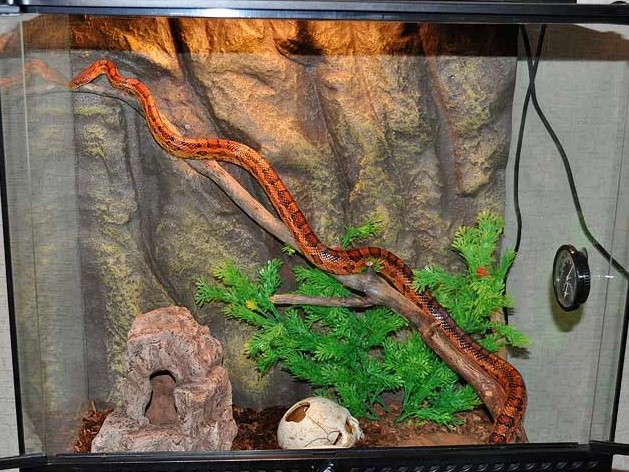 Keeping a non-aggressive and not too large in size Corn Snake is not difficult if you observe several important conditions for the reptile’s life.

Terrarium: When choosing a terrarium, preference should be given to a horizontal or cubic terrarium. The minimum enclosure size for a single snake should be 70x50x50 cm. This enclosure can hold up to three Corn Snakes. However, even if only one snake is planned, the terrarium should not be smaller, otherwise, the snake will not fit in it. For the first time, you can also use a plastic box for young snakes, but in this case, you need to make proper ventilation, which will not create drafts. For this, the holes must be positioned on the top and side of the container.

Substrate: Chopped bark or coconut chips are one of the best substrates for Corn Snake. You can also use paper, but change it as it gets dirty, but at least once a week. A mat that imitates artificial grass can give the terrarium decoration an aesthetic appearance, but it must be washed regularly, and therefore it is better to immediately purchase a couple of such rugs and change them as they become dirty. Any other substrate is not suitable for snakes, as it can cause undesirable effects on the health of the reptile.

Lighting: Fluorescent lamps can be used as daylight (for 12 hours). Corn Snake does not require ultraviolet radiation, moreover, the terrarium should be placed out of direct sunlight to avoid overheating the reptile. The change of daylight hours should be accompanied by twilight, which will create conditions in the terrarium that are as close as possible to the natural habitat of the reptile.

Maintaining moisture: Snakes often drink and often defecate in the water, and therefore the water in the drinker must be changed regularly, as it must always be clean. It is important to monitor the composition of the water: it is better to use drinking table water for these purposes, which does not contain chlorine and other impurities harmful to the reptile. In addition, to maintain moisture, the terrarium must be sprayed several times a day using a spray bottle or an automatic rain machine. The water temperature should not fall below 23-25 ​​° С. You can put sphagnum moss in a small cuvette, which will become a kind of “humidity chamber” for the snake. It is especially important to keep moisture during the Corn Snake shedding, otherwise, the snake will shed in chunks.

Design: A large and stable drinker, in which your skid can fit entirely, is essential to create a comfortable environment. The presence of many shelters in the form of stumps, pots, and other items will allow the snake to spend the day in them, as it does in nature. You also need to place a few snags, and decorate the walls of the terrarium with rock and place several stones on which the snake can climb. In addition, the presence of these elements will help the snake during molting. At the same time, it is important to leave free access for the reptile to the cold corner and the warming point. 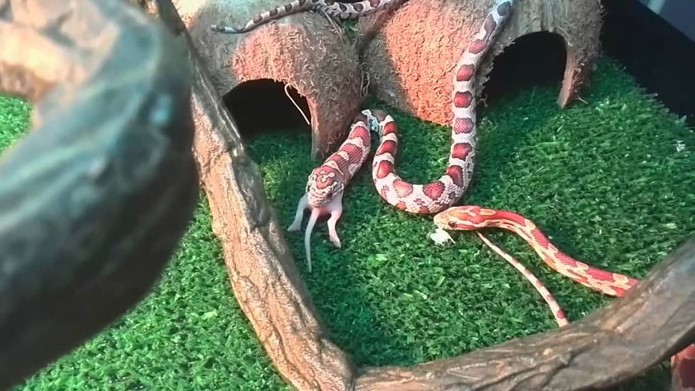 Feed the Corn Snake enough once a week, or as the snake has defecated. Small rodents and chickens are suitable as food.

To avoid injury, do not offer live prey to the snake, as rodents can injure the reptile. Instead, prey thawed to room temperature can be spread on a rock placed in the terrarium and using tweezers to create the illusion of hunting. In addition, never use wild rodents as food, but only specially raised ones, otherwise you risk infecting the snake with parasites.