Just because you are the biggest mammalian predator (bear) on the planet doesn’t mean you’re a bad mother. 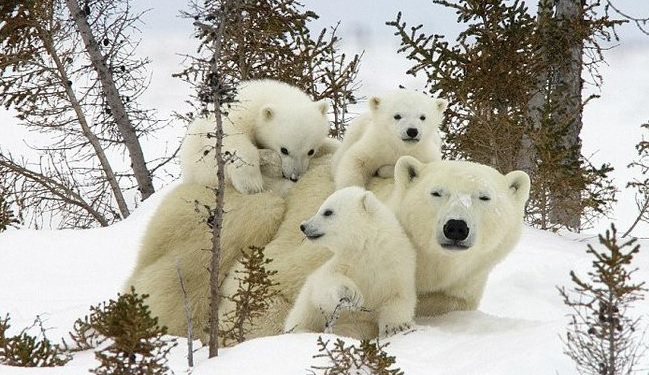 In early spring, this polar bear got out of a snow den, surrounded by three cubs. She has not eaten for a long time, and now she only dreams of a large piece of meat. Now she will not only have to feed four but also look at both. She shouldn’t trust male bears. But for the babies, all the surrounding objects are toys, with the help of which they will learn about the world.

The white or polar bear is an inhabitant of the North, it lives in the Arctic regions, in the continental shelf along the periphery of the Arctic Ocean. Usually, the bear adheres to the territory of pack multi-year ice and, under suitable conditions, can even walk along with them to the North Pole.

Experts predict a decline in the number of polar bears by almost two-thirds over the next 40 years. Some populations, due to vigorous human activity, can disappear completely.

The main threat to the existence of the polar bear is the progressive melting of drifting ice caused by climate warming. Bears are simply losing a significant portion of their habitat. In late summer-early autumn, these ice recedes into deep-water areas where it is very difficult for bears to hunt. Pregnant females cannot get to places on land to arrange their ancestral dens. The early thaws threaten the destruction of these dens while female bears and cubs are still in them. Hunting places for bears and their seasonal migration routes are changing. Animals are forced to travel long distances in search of food, their physiological condition deteriorates, especially young and old individuals. Animals often die of elementary hunger.