Whether you like to tinker with adorable puppies or are planning to seriously engage in breeding dachshunds, before enjoying the interaction with small dachshunds, you will have to solve several questions, the first of which will be the correct organization of the mating.

Although mating dachshunds, pregnancy, and puppy birth in most cases proceed naturally, all risks cannot be completely excluded and you must be prepared for various problems and surprises. In addition to taking care of the health of your pet, clearly answer for yourself why you need puppies and whether you are ready to deal with them, whether you can arrange for a good owner. Irresponsible behavior and inattention of a person often turn into a tragedy for crumbs.

The general rule for both partners before mating is to carry out preventive measures. It is necessary to vaccinate, deworm and eliminate external parasites. The use of most drugs is prohibited during pregnancy and lactation, so it is better to treat the animal with a shift in the schedule by 1-2 months than to risk the health of the dog and its offspring. The male is treated to prevent infection of the female on contact.

Before mating dachshunds, you should check their health. Both dogs must be healthy both physically and mentally. A dachshund preparing to become a mother needs to maintain optimal weight.

Choosing a marriage partner is not easy. Excellent health of a dog is not enough for breeding. For an inexperienced owner, it is best to seek guidance from a breeder’s club. The external data of partners and their pedigrees are evaluated. An ideal choice would be a dachshund dog, which has both its own awards and awards of its grown offspring in its piggy bank. 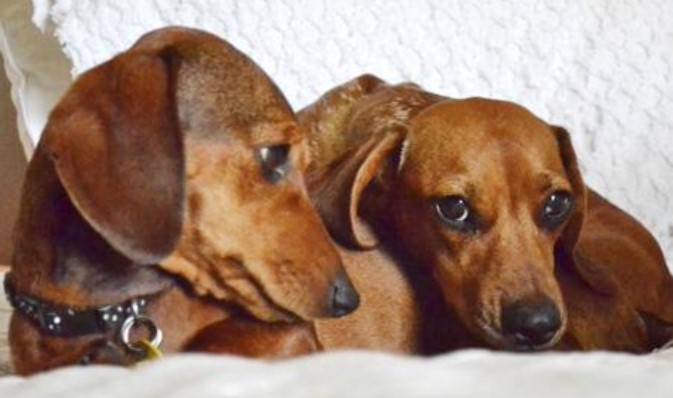 Dachshunds have leaks twice a year, less often in dwarf breeds. In females, pregnancy and puppy birth are important for maintaining psychological health and good reproductive health. In nulliparous dogs, the risk of developing gynecological diseases in adulthood increases.

Veterinarians recommend the first mating of a dachshund at the age of 15-20 months, for the second or third estrus. It is not advisable to mate earlier than 12 months, since at this age the dog has not yet fully formed, has not gained “adult” muscle mass. Pregnancy and lactation are always a big burden on the body, at an early age, they are more difficult and can lead to serious diseases, the birth of underdeveloped, weak puppies, metabolic disorders, increased fragility of bones, and other problems.

The estrous cycle of the female proceeds in four stages: proestrus, estrus, diestrus, and anestrus. It is necessary to admit a male to a female during estrus, 10-14 days from the beginning of estrus. At this point, the egg is ready for sperm fertilization. Earlier or late bearing does not lead to successful conception.

Externally, you can determine the readiness of a dachshund for mating by the following signs:

If dachshund mating is carried out for the first time, you can seek help from an experienced dog owner in order to determine as accurately as possible the signs of a female’s readiness. In veterinary clinics, a vaginal swab is taken and analyzed to determine the stage of the estrous cycle. It is optimal to carry out laboratory analysis with weakly expressed external signs or unsuccessful previous mating.

The optimal age for the first mating in male dachshunds is considered to be 12-15 months. The owners of the dog need to take into account that, when untying the male dog, they will need to provide 3-4 matings per year to maintain the health and psyche of the male dog. A dog that has not done a cage calmly tolerates the presence of females in heat and the absence of sexual activity. For untied males, continuing dating with the opposite sex is necessary.

Males feel well the condition and readiness of the female. Experienced dogs groom but do not try until the female’s estrous stage begins. If the male is young and in his first mating, problems may arise. In this case, the help of a dog handler during intercourse will be useful.

Mating is usually carried out on the territory of the male. In a familiar environment, the male dog feels calmer and more confident, it is easier to start the process. No additional conditions are required for the successful mating of dachshunds. If one of the animals is nervous, you can give them a favorite treat or toy to calm them down. Aggressive behavior in dachshunds is rare, but if this happens, the female should wear a muzzle or tie her mouth with a bandage.

If the time is right, the animals are healthy and the sexual intercourse ended with ejaculation, then after the first attempt, the female will become pregnant. Sometimes it is recommended to carry out another knitting, two days after the first, but this is a precautionary measure than a prerequisite.

The seeming complexity of the preparatory stage is more than compensated by the happiness of communicating with touching lumps, affectionate and devoted dachshund puppies. And of course, to get an unsurpassed result from the whole venture with offspring, you need to follow the rules for selecting a partner and the recommendations of veterinarians.