So, all the troubles associated with the organization of mating have passed and a pet, a dachshund, is waiting for the puppies. The period of pregnancy is difficult for the body of any bitch, in order to bear the babies she will have to spend a lot of energy.

The health of the expectant mother and her offspring directly depends on the proper care of the dog at this difficult time.

Pregnancy begins on the day of successful mating, which leads to the fertilization of the egg. The normal term for taxes is 62 days. Childbirth is considered physiological if it takes place from 53 to 72 days of pregnancy. When carrying out several matings, it is more difficult to determine the exact time, but the discrepancy of 2-3 days does not really matter. 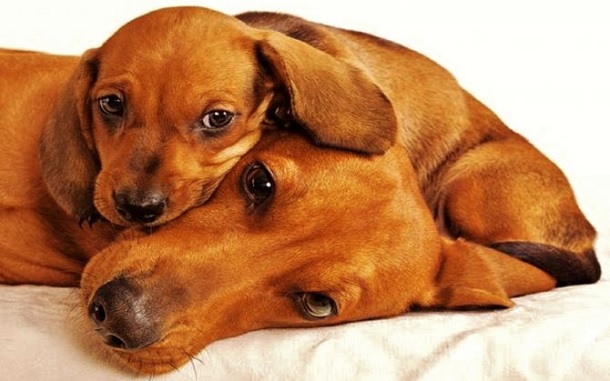 In the first month, it is almost impossible to notice pregnancy in dachshunds. Sometimes the dog’s taste preferences and behavior change, but more often no signs are observed at this stage.

At the end of the first month, an experienced professional can feel the puppies by palpating the abdomen. The owners are not recommended to do this, as gross manipulation can lead to the abortion of the fetus. By the 35th day, dense lumps cease to be felt, since the fruits are already in the amniotic fluid.

Starting from the second month, it becomes noticeable that the dog becomes round, the sides appear. If this is the first litter in a dachshund or there will be one or two puppies in the litter, then the bitch may not change significantly in size until giving birth. In the second month, you can often feel the movement of the puppies by placing your hand on the dog’s belly.

From the fourth to fifth week, toxicosis, fastidiousness in the choice of food, refusal of food is possible. At the same time, there is colorless mucous discharge from the vaginal loop. If they are plentiful, with a strong odor or a certain color, this is a pathology and the animal needs to be urgently taken to the veterinarian.

Gradually, from the fourth week, the nipples become noticeable, the skin around them brightens. From the seventh week, the size of the mammary gland increases. Small amounts of colostrum are excreted 3-5 days before delivery.

Throughout pregnancy, the dachshund needs high-quality and nutritious food. In the first half of puberty, the feeding regime and diet do not change. In the second half, the amount of food increases with the increasing weight of the dachshund.

The total daily food intake is increasing, but it is important to ensure that the dachshund does not overeat or get fat, this makes it difficult for the puppies to give birth and develop. But she should not starve in any case. The percentage of protein foods is increasing: meat, eggs, fish, dairy products. Foods high in fiber and starch (cereals, baked goods), on the contrary, are best given in limited quantities. Vegetables are great fillers and sources of vitamins.

During pregnancy, it is imperative to give the expectant mother vitamins and minerals. A large number of them go away for the correct and full development of the offspring, their lack will especially strongly affect the health of the puppies and bitches. You can buy ready-made vitamin and mineral complexes, or calculate the norms together with a veterinarian and add yourself according to dosages. Particularly great attention is paid to calcium metabolism. Not only the health of bones and teeth depends on the content of calcium, but also the prevention of postpartum eclampsia, which is often found in dachshunds.

At this time, the daily portion should be divided by 2, and from the sixth week into 3 doses.

When fed with ready-made dry food, dogs are gradually switched to food for pregnant women or for puppies. In this case, you do not need to add vitamins and minerals.

A pregnant dachshund must be protected, cared for, and cherished. During pregnancy, the use of anthelmintic drugs, vaccination of the animal is unacceptable. If you forgot to carry out deworming before mating, you will have to wait until delivery, although the presence of worms complicates the pregnancy.

You shouldn’t wash pregnant dachshunds. As a last resort, it is better to wipe the dog with a damp cloth. You cannot let a dachshund with wet wool out into the street, into a room with a draft.

If before that the dachshund did not have a place of its own, then puberty is the optimal time to take care of this. The expectant mother should sleep on a litter and warm. Under no circumstances should she be allowed to lie on the cold and wet floor.

It is necessary, if possible, to eliminate all stress factors. In the second half of pregnancy, the dachshund should not let her run up the stairs or actively jump.

It is impossible to completely deprive the dog of physical activity. The stronger the abdominal muscles, the easier the birth will be. You need to walk with a dachshund in the first month of pregnancy as much as in a normal state. In the second month, it is not the time of walks that decreases, but their range and activity. The dachshund itself will begin to play and run less, get tired faster. You just need to monitor her behavior and not force her to be active. If possible, it is better to increase the number of walks, reducing the time of each.

Caring for a pregnant dachshund is not difficult. The main thing is to monitor her condition and nutrition. The dog itself will tell you what it needs at the moment. Subject to the diet and other rules of keeping during puberty, puppy birth will be quick and painless, and a happy mother and newborn puppies will delight the owner with their health.