Stroking a cat is wonderfully relaxing. But what if you discover dandruff in the fur of your four-legged friend when you stroke it? We explain what causes dandruff in cats and what you can do about it.

Contents hide
1 Dandruff in Cats: Symptom
2 Seven Causes Your Cat Has Dandruff
2.1 Too dry air
2.2 Too little grooming
2.3 Hormonal changes
2.4 Skin diseases in cats
2.5 Organic diseases
2.6 Parasites & dandruff
2.7 Wrong diet
3 When to Go to the Vet?
4 Dandruff in Cat Fur: What to Do?
5 Tips Against Dandruff in Cats 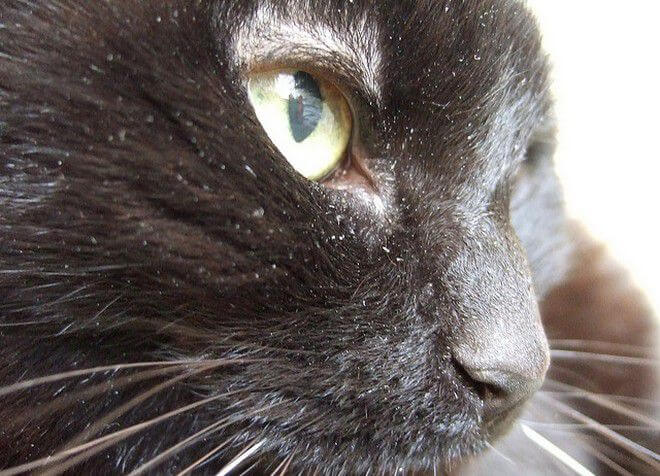 As with humans, the upper layer of the skin, the epidermis, is constantly in motion in cats. It forms completely anew every few weeks. However, when the skin is out of balance, mistakes can appear in the process. For example, the skin makes too many skin cells or too much sebum, which shows up in the form of scales.

Scales lie loosely on the fur. They are easier to spot in black cats than in light cats.

Seven Causes Your Cat Has Dandruff

Illnesses, improper nutrition, or external influences: As with us humans, the skin reflects a lot. The cat’s skin is particularly sensitive during the change of coat. Because during this time she works at full speed. Dandruff in cats can be caused by a number of different things:

Air conditioning in summer, heating air in winter: Many people know the consequences of dry indoor air from their own experience. Cats feel the same way. Indoor cats in particular are dependent on the indoor climate created by humans.

If the air is too dry, dandruff can be the result. Velvet paws who like to make themselves comfortable on a heater are also more prone to dandruff.

Dandruff can occur because grooming is insufficient. This can be the case with long-haired cats whose fur becomes matted. Especially under the “armpits”, on the chin or on the sides, a small knot in the fur quickly develops into a real sheet of felt. Little air comes under this so that the skin dries out.

Felt also creates a microclimate that makes it easier for bacteria and fungi to penetrate the skin. Dandruff can develop in older cats when the velvet paw can no longer clean itself.

If the hormones change significantly, this can encourage dandruff. For example in “puberty” when the cat and tomcat become sexually mature, and with pregnant or newly neutered cats.

If dandruff appears, it could be a sign of a skin disorder. Because many of them are associated with dandruff. For example skin fungus, which is often noticeable in circular hair loss and flaky skin. Bacterial infections or contact allergies are also possible causes of dandruff in cats.

Many diseases affect the metabolism and thus also the complexion. Dandruff in cats is occasionally the result of diseases such as tumor diseases, thyroid disorders, or diabetes. Most of the time, a blood count is needed to diagnose it with certainty.

Parasites such as fleas or mites unbalance the skin and promote dandruff in cat fur. The cat scratches itself more often, which allows bacteria to penetrate the skin. A bacterial infection, on the other hand, is often associated with flaky fur. Usually, you will also notice other symptoms such as redness or crust formation.

Mites can also cause dandruff in a cat’s fur. Some mites not only cause dandruff, they even look like them. For example, predatory mites, also known as “wandering scales”. So it’s worth taking a closer look.

Untreated intestinal parasites such as worms can lead to deficiency symptoms in the long term. Dandruff can be a possible consequence of this.

Complete feeds in Germany contain everything a cat needs. However, diet can cause dandruff in some velvet paws. Be it because it cannot process certain nutrients. Or because of food intolerance or allergy.

If your cat has dandruff, you should review your diet. Because a protein-rich cat food with high-quality fats can have a positive effect on the complexion of the skin.

When to Go to the Vet?

If you discover dandruff on your cat, you should first investigate the cause. Several factors often come together: If the coat changes, heating air, and a non-optimized diet occur at the same time, dandruff can be the result. When spring approaches, the sheds are a thing of the past again.

However, if dandruff appears along with other symptoms, persists for a long time, or becomes more noticeable, you should consult your vet. If the infestation is light, our tips at the end of the article will help.

Dandruff in Cat Fur: What to Do?

There are many causes of dandruff in cats – and many ways to treat it.

If you have a food intolerance or allergy, following an elimination diet can help. You only feed one type of food for a period of several weeks – treats are no exception. It is best to carry out such an elimination diet after consulting your veterinarian.

The veterinarian is also the right contact for all aspects of drug therapy for dandruff as a symptom of diseases. For example, special antifungal agents are used in the event of a fungal attack. Medicated lotions or shampoos can give the skin additional support.

If organic diseases are the cause of dandruff, they require tailored therapies. In addition, ointments or other products may be needed to relieve itching.

Tips Against Dandruff in Cats

Whether illness or external influences: The following tips can help prevent or combat dandruff in cats. It can take a few weeks for success to show.