If you are ever offered to have a “devil’s thorn” or “black faun” in the aquarium, we advise you not to be afraid. After all, we are talking about an interesting aquarium snail. Despite their terrifying name, these mollusks are completely harmless, they will help diversify the animal world in the aquarium and will provide all possible help in the fight against algae. Read about the intricacies of the content of this wonderful snail in our article.

Devil’s thorn (Faunus ater) is a gastropod mollusk from the Pachychilidae family, in which it is the only brackish-water representative, the rest of the species live exclusively in freshwater.

The species received its Latin name in honor of the ancient Italian god – Faun, who was revered as the patron saint of forests, fields, pastures, and domestic animals. In the more common version – the devil’s thorn – is a reference to the elongated and pointed shape of the shell. Why exactly the “devil” – there are different theories. According to one, this is due to the almost black color of the shell, on the other – with a truly “devilish” smell of dead mollusks.

The devil’s thorn snail is a rather large mollusk, a bit like tylomelania, and it moves in the same way, dragging the shell behind it. These gastropods are very active, eat algae well, and do not spoil live plants.

The devil’s thorn is one of the largest aquarium mollusks. The average size of an adult is 6 cm, but often they grow up to 8 cm with a shell width of 2-2.5 cm.

A characteristic feature of the snail is a highly elongated conical shell with a pointed end in a deep black color, although individuals with dark brown shells are sometimes found. The surface of the shell is smooth, glossy; the number of coils can vary from 6 to 20, depending on the age of the snail. The operculum (the lid covering the mouth) is oval and dark brown in color. Females and males do not differ in appearance.

The leg of the devil’s thorn has a round shape but is colored lighter than the shell, often with an admixture of yellow or orange tones. On the head, there is a pair of sensitive antennae, at the base of which there are visual organs. 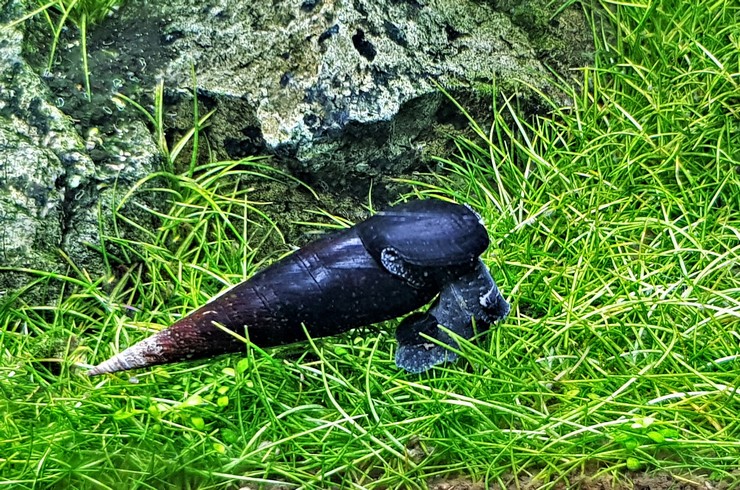 In its natural environment, the devil’s thorn snail can be found in a large area of ​​East and Southeast Asia (Thailand, Malaysia, Sri Lanka, Indonesia), as well as near the sea coasts of China and northern Australia.

The species definitely gravitate towards the lower reaches of rivers flowing into the Indian and Pacific Oceans. Water in these places is mixed with seawater. Inhabits various lagoons, canals, ponds, mangroves. Snails live in shallow water (1-1.5 m) with a muddy bottom near sandy beaches and rock ledges.

The devil’s thorn snail is an inhabitant of the silted reservoirs of East and South Asia, the Philippines, and New Guinea. The mollusk lives on the border with the sea coast in saltwater.

Keeping the devil’s thorn snails is not particularly difficult. For settling, an aquarium of 10 liters or more per individual is recommended. A species aquarium will be the best choice, as in the presence of fish, especially active species, mollusks can often burrow into the ground.

It is best to place washed fine sand at the bottom of the aquarium. It is recommended to select areas with thickets of plants and free for crawling. Snails love clean, oxygenated water, so a filter and compressor are a must. Do not forget about regular water changes to reduce the concentration of hazardous compounds. With every change, it is recommended to use Tetra AquaSafe conditioner, which instantly removes chlorine from the water, and also binds heavy metals, such as copper, which is very dangerous for invertebrates. The water in aquariums with a devil’s thorn can be salted, as this will create an environment close to nature, but this is not necessary, snails feel great in freshwater.

At low temperatures, the activity of mollusks decreases, they spend more time in the ground. It is better to make the light diffused, for example, using floating plants.

Snails are not interested in living plants, but sometimes they damage mosses.

Snails sometimes have fun at night: they climb the glass to the surface of the water, and then break down with a characteristic rather loud sound. If the aquarium is in the bedroom near the bed, it can scare the owner.

The devil’s thorn snail gets along well with most species of calm tropical fish, be it the popular viviparous fish or schooling tetras. There were no conflicts with shrimp either.

Tetraodon, labyrinth fish (gourami, macropods, cockerels) and large cichlids (akars, astronomies, etc.) will become unsuitable neighbors for mollusks. These inhabitants of the aquarium can actively hunt sluggish mollusks and they will definitely not be given a quiet life. 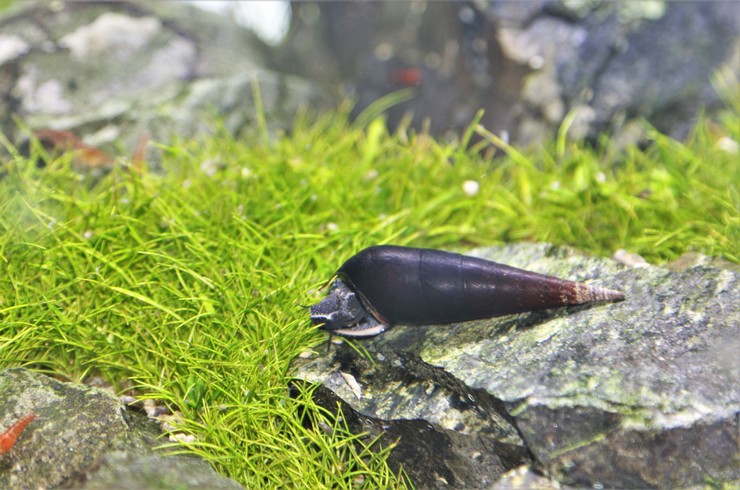 In most cases, the devil’s thorn snails will be provided with food without additional intervention. The basis of their diet is algae, which are almost always present in varying amounts in the aquarium. Most of all mollusks like green and diatoms, although they do not disdain blue-green.

Tetra Tablets TabiMin or Tetra Pleco Tablets are suitable as an additional source of nutrition.

Information about the breeding of the devil’s thorn snail is rather ambiguous. It is reliably known that these mollusks are dioecious, but sexual dimorphism is not expressed. Therefore, for the reproduction process, at least a group of individuals is needed.

Fertilization takes place inside the female’s mantle, after which she lays eggs with a whitish shell on the surface, in which it is easy to see small snails. Next, you will need saltwater, because snail larvae develop in such conditions, but this is much more difficult to recreate. Thus, the reproduction of the devil’s thorn snail at home is an almost impossible task.