The Devon Rex breed cannot be confused with any other, thanks to the shape of the head – in full-face visually resembling a heart and huge ears with a low rise. Devon Rex is affectionate and energetic. Like other Rexes, these are a kind of “cat-dogs” in character. They are loving, mobile, and devoted to the owner.

Cats of this breed have excellent immunity, are not afraid of most diseases inherent in animals.

The only thing to note is that Devon Rex can suffer from neurological myopathy, provided that their parents suffered from this disease and congenital hypotrichosis – when the animal completely loses its hair at an early age.

It is noteworthy that the representatives of the breed, unlike many of their other relatives, have a specific date of birth – July 15, 1960. It happened in the British county of Devonshire when a charming baby with thick curly hair was born. The true color is now difficult to name, presumably, the kitten was black. 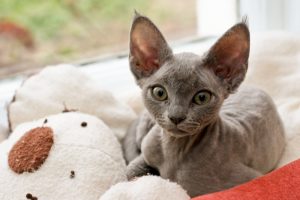 The name of the breed consists of two parts: Devon – in honor of the place where this event took place, “Rex” – from the breed of curly rabbits Rex.

The Devon Rex cat breed was not immediately recognized by felinologists, since before that there was already a breed with curly Cornish Rex hair. At first, they were combined into one breed. But later it was proved that the Devons have a different genetic mutation in the rex gene. When mating Devon and Cornish, straight-haired kittens are obtained.

Later, thanks to the efforts of breeders, the breed gained recognition and wide distribution throughout the world.

The behavior of the Devons has the habits of a dog and a monkey. They can jump quite high and fit in tight spaces.

They can be trained to perform dog tricks, such as carrying objects.
They like to sit on the owner’s neck or shoulder. 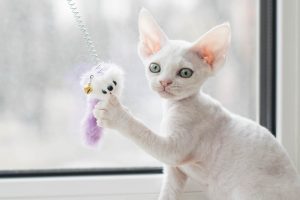 Devon Rexes are quite unpretentious. Despite the small amount of guard hair, the breed sheds slightly and does not require regular brushing.

Pets of the Devon Rex breed do not need special care and any greenhouse conditions. But, you need to know the basic rules of hygiene and adhere to them.

Since cats of this breed have short hair, they need to be bathed more often than others. There is nothing complicated and unusual in this. Just buy shampoo for your pet, and in no case wash it with soap or products intended for people.
After bathing, dry with a hairdryer or towel and do not allow to lick. On this score, everyone has their own devices. You can wear a postoperative collar or clothing around your neck. These are guidelines rather than requirements.

The ears of the Devon Rex are large and erect, excess fat accumulates in them since more fat is released on the cover than in other breeds. Therefore, it is recommended to clean your ears once a week with a cotton swab or stick. Ear cleaners are available at a specialist pharmacy.
Devon Rex’s nails should be trimmed once a month. This procedure should be done for cats of all breeds that live at home. Use nail clippers. The main thing is that the length does not exceed 5 mm and at the end, you can file it slightly with a nail file.
It is also advisable to brush your teeth every 10 days. Devon Rex is absolutely calm about all procedures. Can be wiped with regular gauze or bandage. If funds permit, you can buy toothpaste for animals.
The eyes of the Devon Rex are very large and require daily cleaning, as dark secretions accumulate after sleep. Dampen a cotton swab with a special product or boiled water and wipe your pet’s eyes.