Posting a Doberman puppy ears is not an easy process. However, you should not give it up, since correctly posted ears are not only beautiful but also good for health. An uncropped ear can often break, making the dog more vulnerable to ear infections and other illnesses.

At the age of 2-3 months, a Doberman puppy, whom the owner wished to see in its usual form – with a docked tail and ears, must undergo a number of certain medical procedures. Tail docking is much easier as it is often done by the breeder. Ponytails are removed for puppies that are not yet 10 days old. The new owner of the dog has to deal with changing the appearance of the ears.

Important! Ears posting are set after you have cropped your healthy and vaccinated puppy’s ears.

To post the dog’s ears on his own, the owner will need the following materials:

To shape cropped ears, you can purchase a special wire crown at your veterinary pharmacy.

Important! After cropping, a suture is applied to the ear, which tightens the edge of the remaining flesh during the healing process. Until the wound heals, it must be monitored and constantly treated with brilliant green and chlorhexidine.

Before placing the crown on the dog’s head, it must be adjusted to the size of the head. This is easy to do since the structure is made of soft metal wire.

To prevent the wire from rubbing or injuring the skin, it must be wrapped with an elastic bandage.

To hold the structure on the dog’s head, it can be fastened with a bandage tie, using an elastic band fixed on both sides. After that, the “crown” should be put on the dog’s head and one ear should be pulled up to the upper bar. Its edges are fixed with plaster glued on both sides – outside and inside. It is important to fix the patch well on the skin by pressing it along its entire length. The fact that the “crown” is in the correct position will prove that the tips of the ears are on the same level.

The tie does not need to be tied too tightly under the neck. The dog will have to walk with the wire on its head for about 7-8 days and if the ties are tight, it will be uncomfortable.

After a week has passed since the installation, the “crown” is removed for 2 hours and then reinstalled using new bandages and plasters.

Finally, the structure for posting the ears is removed after the wounds have completely healed after cropping. 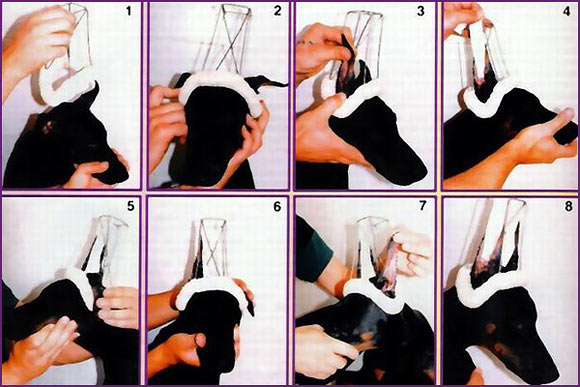