It is one of the most common pet hair allergies. Such an allergy often develops insidiously and simply surprises the dog owner.

Not everyone has certain allergies from birth and lives according to them. Some people don’t notice the symptoms until they’ve been dog owners for a few years. For most, of course, this is a nightmare par excellence.

In such a case, good advice is expensive for those affected. In addition, they don’t even have to be affected themselves. Because what happens if the new partner has an allergy and you want to move in, or the child who has just been born? What can you do about the allergy? Are there any ways to keep the pet? What is the point of desensitization? Are there any dogs that do not show any symptoms of allergy?

Contents hide
1 What Exactly is a Dog Allergy?
2 What are the Symptoms of a Dog Allergy?
3 What Measures Are Taken When Symptoms Occur?
4 How is a Dog Allergy Diagnosed?
5 Dog Hair Allergy – What To Do?
6 Is Desensitization Worthwhile?
7 Unfortunately, When in Doubt, the Only Thing Left is Separation

What Exactly is a Dog Allergy? 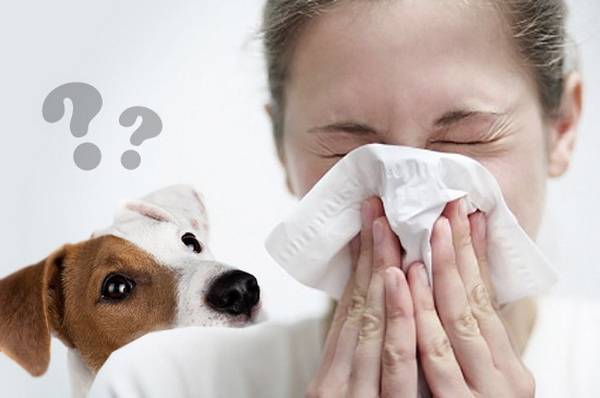 Usually one always speaks of a so-called dog hair allergy. However, the name is not entirely correct. Because mostly it is not the hair that the allergy sufferer has problems with, but what sticks to them. These are mainly proteins that can be found in the saliva, urine, and skin flakes of dogs. This is usually the allergen Can f1, which causes an allergic reaction.

These proteins are normally poorly distributed in the air, but they are carried through the clothing and of course the hands of the animal owner. In principle, an allergy sufferer does not even have to come into direct contact with a dog. If he shakes the hand of a dog owner, this is usually enough for an allergic reaction.

What are the Symptoms of a Dog Allergy?

If there is an allergic reaction, the person’s immune system reacts extremely to the substances in question. The symptoms are very similar to other allergies, for example, a pollen or house dust allergy. Typical reactions include:

If these symptoms occur and they are not treated, they can, in the worst case, lead to anaphylactic shock.

What Measures Are Taken When Symptoms Occur?

If it is already known that an allergy is present, the person concerned usually always has appropriate medication at home, which he can use in the event of an emergency. These are preferably antihistamines or cortisone preparations that can be taken in the form of tablets. Usually, they relieve acute symptoms within half an hour.

In some cases, those affected also take the antiallergic agent when they know that a dog is about to visit. However, such a drug is not a permanent solution. Because it only removes the symptoms, not the cause.

How is a Dog Allergy Diagnosed?

To determine whether it is really an allergy, a so-called prick test is carried out by an allergist. As part of the test, the doctor drops a specific allergen on the patient’s skin and gently pricks the affected area of ​​the skin. The allergen gets under the skin and causes redness or swelling is present. After around 30 minutes, this procedure can be used to clarify whether or not it is really a dog hair allergy.

An additional blood test is usually ordered as an alternative and additional safeguard. The blood sample is tested for antibodies that indicate whether there is an allergy. This test is also known as the RAST test.

A so-called provocation test, in which the allergen is applied directly to the mucous membranes, is largely dispensed with today. Often, however, he remains the last resort if the results of the blood and prick test have not produced clear results.

Dog Hair Allergy – What To Do?

If a dog allergy is actually found, it depends on how severe it is. If there is a risk of permanent shortness of breath or regular anaphylactic shock, it is, unfortunately, inevitable to give up the animal in the long term.

However, if the symptoms are not as severe, there may be an opportunity to take a few steps to make them a little more bearable. This includes:

Increased grooming: your four-legged friend should be bathed at least twice a week and combed every day. This will remove most of the allergens. However, these tasks should be carried out by someone else so that the allergy sufferer does not come into contact with the allergens.

Regular apartment maintenance: In addition to the animal, the apartment should also be cleaned regularly. This includes couch elements or armchairs on which the dog may have sat down. There are also special vacuum cleaners on the market that are suitable for such purposes.

Use air purifiers: These devices pull allergens directly from the air.

Wash hands after contact with dogs: Anyone who has had contact with their dog should wash their hands regularly in any case. This also applies if you have only petted the dog briefly.

Change of clothes: If there is direct contact with the animal, the clothes are changed.

Banishment from the bedroom: The dog should no longer enter the bedroom. It is best to stay away from the sofa as well.

Remove carpets and curtains: Dust catchers like these can make the allergy worse. Therefore, they are best avoided as far as possible.

Desensitization, or desensitization, is a treatment that aims to achieve a higher level of acceptance among those affected. During the treatment, which usually lasts several years, highly concentrated allergens are repeatedly applied to the mucous membranes at certain intervals so that the body learns to deal with them better. There is a habituation effect and thus better tolerance in the event of a confrontation.

At the respective appointments, the patient receives the dose of the allergens in the form of tablets, drops, or as an injection. After ingestion, it remains there for about half an hour to monitor, so that countermeasures can be taken immediately if there is a reaction.

Desensitization is complete after about two to three years. However, the success rate is very different. In some patients, there is no improvement, while others can develop complete resistance. If necessary, the treatment can also be repeated. In general, however, this measure is only recommended if the allergy symptoms are extreme. In the case of a milder course, however, it is preferable to resort to medication.

As far as the costs of the procedure are concerned, these are usually covered by health insurance.

Unfortunately, When in Doubt, the Only Thing Left is Separation

If an allergy develops slowly, or if you get together with a new partner who has a dog allergy, the abolition of the beloved four-legged friend is not yet absolutely necessary. First of all, appropriate measures should always be applied, which may reduce the allergy or even eliminate it.

The same applies if a child is born into a family that shows allergy symptoms shortly after birth. Studies have shown that children who come into contact with a pet as early as possible develop a much higher resistance than those who only try to become desensitized later. However, this procedure is relatively risky and should always be accompanied by a specialist doctor.

Only when all these measures do not work and the health is only endangered by the animal is the decision to give it up. Unfortunately, this is usually better for everyone, even if the decision is very painful at first.