The homeland of this snow-white courageous handsome man is the Argentine province of Cordoba, where he was bred in the 1920s by Doctor of Sciences Antonio Nores Martinez. The scientist, after a preliminary thorough study of various breeds, took the fighting dog of Cordoba as a basis for the new breed and began to cross it with worthy candidates chosen by him: Great Dane, Irish Wolfhound, English Pointer, and some others. From each of these breeds, the cynologist wanted to instill in the local fighting dog their best qualities, and in addition, to remove from it excessive anger, aggression, and mental imbalance. 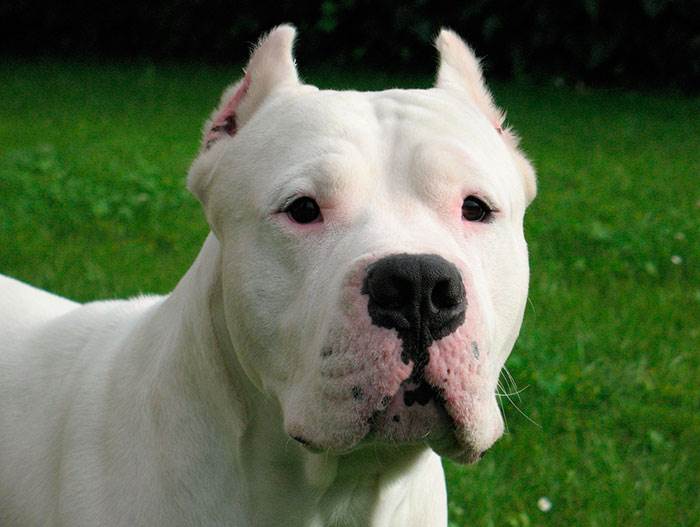 The task of the scientist was to obtain a dog that would combine excellent physical condition with excellent working qualities for swarm hunting for big game (cougar and wild boar) and at the same time would be well adapted to the local hot climate and living with a family. As a result of many years of experiments, the Dogo Argentino was bred, which later became a national treasure of the country. The breed turned out to be even better than expected: the Dogo Argentino turned out to be a brave hunter, the owner of an agreeable character, and besides, an excellent companion and brave defender of his family (while he is always able to distinguish a real threat from an imaginary one); also over time, the dog began to be used to work in search and rescue services and as a guide dog. In 1965, the Dogo Argentino was recognized by the Cynological Federation of Argentina, and the breed received the recognition of the International Cynological Federation only 8 years later, becoming the first internationally recognized Argentine breed. True, misunderstandings arose as to which group the breed should be assigned to: first, the Dogo Argentino was assigned to the Molossian group, then, under the influence of Argentine dog handlers, it was transferred to the category of hounds, and after a while, it was returned to its original place. Despite all the merits of this snow-white knight, lovers of dogfighting spoiled his reputation, so in the 90s he, like his other “companions in misfortune”, such as the American Pit Bull Terrier, Fila Brazilier, etc., was on the list of dangerous dog breeds … Dogo Argentino has an athletic physique, while it does not look massive, but very harmonious, and its movements are smooth and graceful. He has a wide and deep chest, strong limbs, a strong head with a wide muzzle, flexible muscular neck, wide-set small dark eyes, gazing resolutely and boldly. The traditional color of the Great Dane is white, the strict breed standard allows only one dark spot around the eye, and occupying no more than 10% of the head. The height at the withers of these Argentine dogs is 60-68 cm, weight – 40 -55 kg. This stately dog ​​has nerves of steel and docile nature. He is very sociable and benevolent, especially he is disposed towards small children, with whom he will gladly frolic, forgetting about the seriousness due to his status. He has an excellent reaction and a keen sense of smell, and he will quickly and deftly bring you all the objects, no matter how far you throw them or hide them. And he will do it almost silently and very carefully – he generally does everything quietly and calmly. This breed of dog is not inclined to single out one owner, therefore the Dogo Argentino is equally strongly attached to all family members. This formidable-looking dog is actually a vulnerable and sensitive creature. If you offend him undeservedly, it will be a real psychological trauma for him. Of course, he will not do you anything bad in return, but he will remember this injustice for a very long time. Dogo Argentino is unpretentious (he will be happy to live in a country house and in a city apartment), and does not need complicated care. The main thing is not to let him be lazy and lie idle for a long time, otherwise, he may develop bad habits and “wrong” hobbies out of boredom. Therefore, constantly communicate with your pet and provide him with long active walks. It will also not be superfluous to teach him agility, weight pulling, or other canine sports.