Sooner or later, dog owners wonder about the need for mating. Some decide in favor of sterilization, others throughout the life of the pet do not allow it to the opposite [email protected], and still, others believe that mating is necessary for the health of the pet.

Mating of breeding animals and serious selection work is another matter. Professional breeders know the cost of mating animals that are simple at first glance. While ordinary dog ​​owners do not think that the dog does not have the characteristics necessary for the breeding individual, that the offspring will not improve the gene pool, because the dogs are often never even exhibited.

Before mating the Dogue de Bordeaux, it is important to evaluate your capabilities, especially to the owner of the female, who bears all the costs of organizing a meeting, keeping a puppy female dog and offspring, and veterinary services that may be required during childbirth. In addition, it takes time and effort to care for a female and puppies around the clock for at least 3 weeks until the babies have a new home.

Contents hide
1 Readiness of French Mastiffs for Mating
1.1 Signs of a Female’s Readiness to Mate:
2 Preparation
3 How is the Mating of Dogue de Bordeaux (French Mastiff)

Readiness of French Mastiffs for Mating 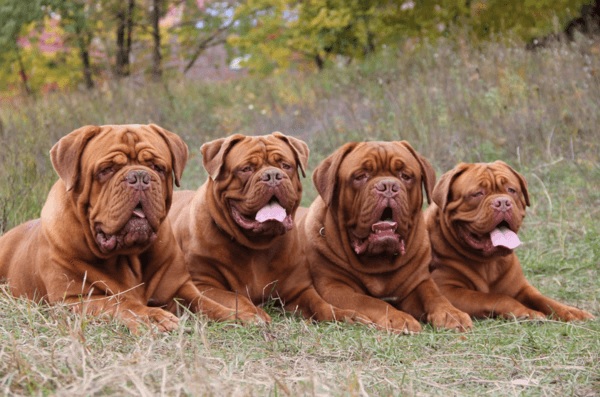 Females are ready to mate after reaching 20-24 months of age. Many factors affect the estrus cycle; estrus can be irregular and individual for each dog. Therefore, you should observe the behavior of the female, physiological changes, determining her readiness for mating visually, or by resorting to the help of a veterinarian. A progesterone test can be done to accurately determine the right time. The optimal for successful fertilization is considered to be 12-13 days of estrus (average).

Signs of a Female’s Readiness to Mate:

After the appearance of the listed signs, the female Dogue de Bordeaux is ready for mating within 48 hours. Females are mating 1-2 times after puberty.

Males are allowed to breed at the age of 1.5-2 years, although they reach puberty much earlier, not yet physically formed. But early mating may turn out to be unsuccessful due to an unformed psyche, shyness in front of the opposite [email protected] Although the male is allowed to make trial attempts at the age of 10 months.

After the direction for mating, which is issued at the club, mating is organized by agreement with the owner of the dog. The search for a dog is carried out in advance. The day is set taking into account estrus.

If necessary, a mating instructor can be invited if the dog owners are not confident in their own strength and knowledge. The search for an instructor is carried out in advance since experienced specialists schedule their working hours for several days in advance.

Before estrus, the timing of which is calculated by the owner, deworming is carried out. Moreover, before the meeting, deworming is also carried out for a dog. Both partners must undergo a complete examination at the veterinary clinic. First of all, they do a test for joint dysplasia (at the age of 12 months), check the health of the heart (at the age of 19 months, since many heart diseases do not appear until this age), and make the necessary vaccinations.

On the day of the meeting, the dogs are walked before meeting each other. The female is not fed if mating is scheduled for the morning or midday. The male is fed one hour before the meeting with the female, giving the minimum amount of food. But if the dog is inclined to rest after eating, then it is better to feed him as early as possible before mating.

How is the Mating of Dogue de Bordeaux (French Mastiff)

Usually, the female is brought to the territory of the male, where he feels comfortable and confident. A quiet room is set aside for dogs, without unnecessary pieces of furniture. The bitch is given some time to get used to, during which she sniffs and gets used to it. Only then is the female introduced to the dog.

The female interested in mating behaves confidently, does not run away from the dog, does not hide, does not squeal. She turns her tail away, and sometimes shows aggressiveness, which is ostentatious. The male makes trial cages.

The help of the owner (instructor) may be required. A knee is placed under the female’s belly so that the female does not crouch, the male clasps the bitch with his front paws, and after ejaculation freezes, breathing heavily or even snoring. The dogs are in the “lock”. During this period, the female is held so that she cannot move abruptly and harm the dog.

Not always in the process of mating Dogue de Bordeaux, a lock is formed. But for successful fertilization, 3 minutes of “artificial lock” is enough, that is, the owner will have to independently hold the dogs, not allowing them to disperse to the sides immediately after ejaculation.

Control mating is not always necessary. If fertilization occurred at the first meeting, then the female can avoid the male at the second meeting.