The English Bull Terrier is distinguished by its friendly disposition, a strong affection for its owners, and loyalty. Curious and playful puppies retain their qualities well into adulthood.

Dogs of this breed are extremely energetic and ideally suited for active, athletic people. You won’t be bored with such a dog, because the pet rarely sits still, which can sometimes be annoying. 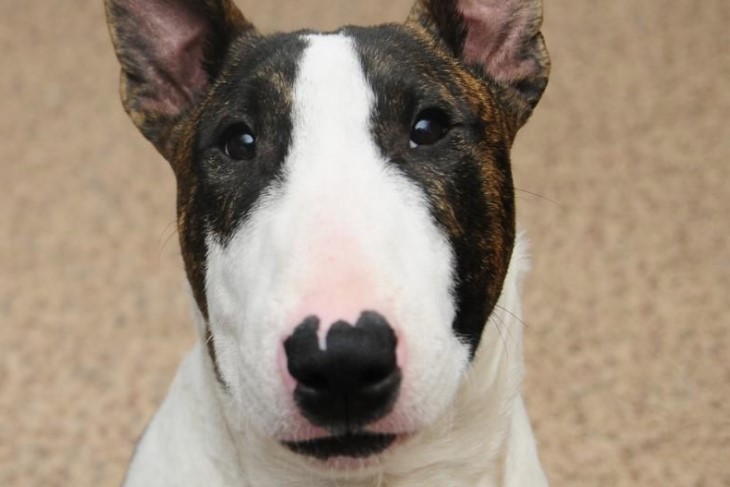 By their nature, Bull Terriers love to do what they like, so training should be based on this principle. Otherwise, the dog will be stubborn. However, throughout its life, the bull terrier will make attempts to prove itself as a leader more than once, so you should always show your pet who is in charge of the family so that he respects his master-leader. It is difficult to control the behavior of a pet without discipline, therefore, from an early age, the bull terrier is taught to obey, although this will take a lot of time and patience. Without perseverance and training, the bull terrier, being self-confident and too restless, will not listen to the owner. It is important not to let him feel that the owner is his property.

When staying alone for a long time, the Bull Terrier is inclined to misbehave from boredom. Ugliness can turn into torn shoes, pillows, gnawed furniture, neediness in the wrong place, and the owner will be to blame for this because the dog had nowhere to put his energy.

The Bull Terrier gets along well with children but does not allow to torment, tease himself, be rude towards himself. May show discontent in the form of growls, grins, if someone approaches him while eating. Therefore, the games of children with a dog should always be under the supervision of parents.

Sensing danger or unpleasant people nearby, the pet will not miss the opportunity to show its vigilance and attract the attention of the owner. However, this quality can turn into a disadvantage if the dog barks randomly at everyone in a row, zealously protecting his family, reacting to the abuse of strangers, males, cats, can simply attack, using his teeth. However, English Bull Terriers are not cruel killers and bloodthirsty fighters, contrary to all rumors, they do not show such aggressiveness. By their nature, Bull Terriers are very empathetic, loyal, and non-hostile. A well-bred animal with a balanced psyche will never attack strangers.