Mastiffs are majestic, harmonious dogs with dignity. Calmness, patience, kind disposition, and obedience of the Mastiff are combined with boundless courage, strength, and perseverance. 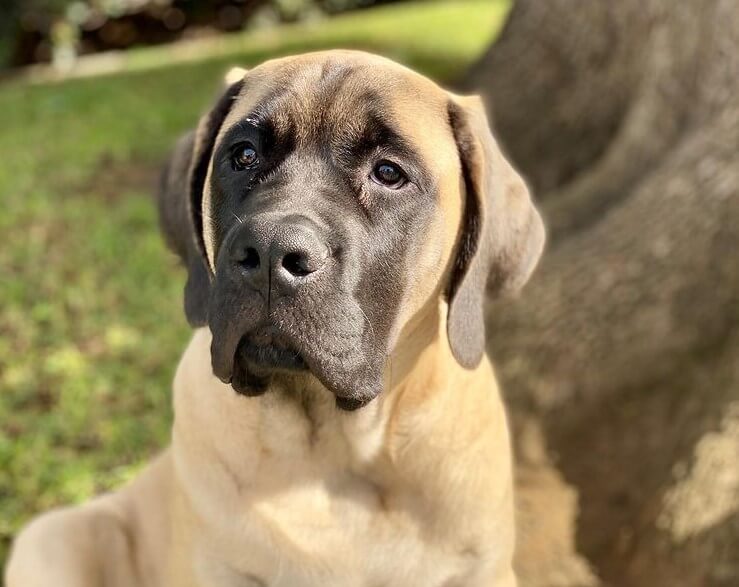 The history of the breed goes back to ancient times. It is believed that the ancestors of the English Mastiffs were the Tibetan Mastiffs, once common in Egypt, Babylon, Persia, Assyria, and Greece.

The breed got its name “Mastiff” in Rome, where giant, brave dogs were used in gladiatorial battles. In Great Britain, the ancestors of the Mastiffs appeared thanks to the Celtic tribes who brought dogs with them.

In the 11th century, large Mastiffs were used to hunt various animals and as overseers for slaves. According to the surviving data on the hunt, one Mastiff was estimated as 20 Hounds and Greyhounds, and in war, this dog replaced at least two well-trained warriors.

Mastiffs were considered elite dogs. For them, people paid a tax, and the poor could not afford the maintenance of this breed.

Purposefully breeding purebred Mastiffs began to be engaged in the 15th century, during the reign of the Tudors and Stuarts.
In 1835, the demand for the breed fell sharply and the Mastiff population declined significantly. In 1872 the Mastiff Lovers Club was founded. His main goal was to recreate the breed. And by 1883, the modern type of the Old English Mastiff was formed.

The tragic events of the First and Second World War practically wiped out the breed from the face of the earth. After World War II, there were only 14 English Mastiffs in the world. Rescuing the situation, the breeders have thought out a clear plan for the restoration and improvement of the breed, using American dogs at the same time. Fortunately, they succeeded, and today Mastiffs are popular in all countries. 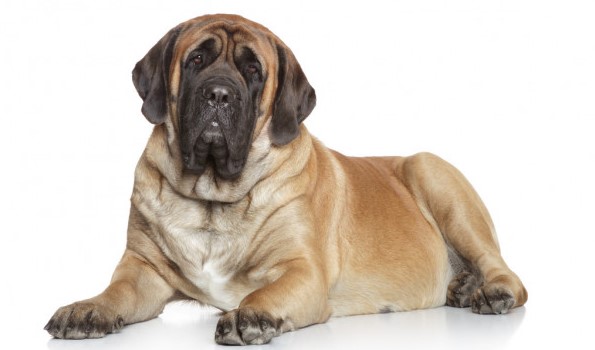 The English Mastiff is a very large, imposing dog. Despite its impressive size, it looks harmonious and proportional. The height of the Mastiff at the withers can reach 70 cm, and the weight – 85 kg.
The length of the dog’s body exceeds the height at the withers by about 12%, so the Mastiff looks somewhat heavy. The proportionality of the dog is one of the most important characteristics of the best representatives of the breed, since it is not enough to create just a large dog, it is necessary that it be stately and harmonious.

The Mastiff has a powerful, muscular body with a developed chest and straight, powerful limbs. The head is large, wide in the cranial region, with pronounced superciliary arches and skin folds. The ears are thin, set wide apart. The transition from the forehead to the muzzle is sharp, almost vertical, the muzzle is short and wide. Small, wide-set eyes, brown or hazel. The nose is large, flat, and wide. The teeth are strong, developed, the bite is pincer-like or scissor-like, the lower jaw can protrude forward. The tail is rather large, set high, in a calm state it is lowered down while moving it is at the level of the back.

The Mastiff’s coat is short, shiny, not harsh, with an undercoat. Color: apricot, brindle, fawn. The muzzle, ears, and nose should always be black. 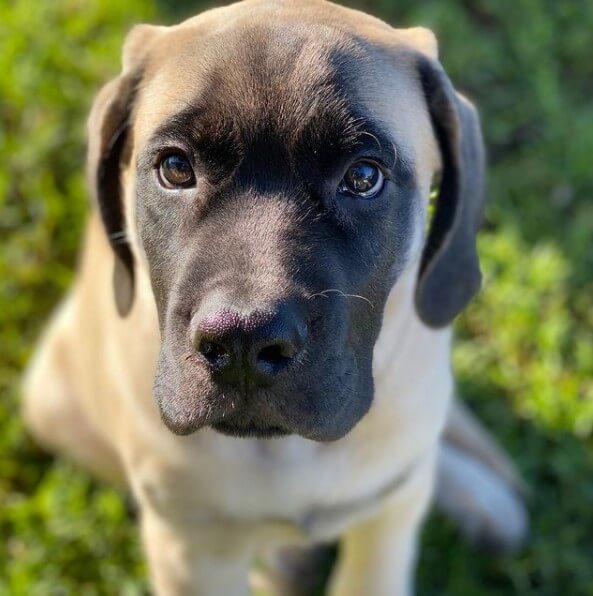 English Mastiffs treat the owner and family members warmly and reverently. They are also very friendly towards others. Mastiffs are drawn to children, easily establish contact with them and protect them from trouble. These dogs are very obedient and balanced. They behave calmly, do not bother anyone, and, most likely, will peacefully snooze under your intimate conversations.

At the same time, Mastiffs are excellent watchmen who, by their very appearance, discourage criminals from any desire to enter the house. Despite his good nature, if necessary, the Mastiff will wholeheartedly defend the owner and family members and will stand to the last.

It is important to understand that the manifestation of the positive qualities of the breed is a consequence of proper education and maintenance. If a dog is ineptly brought up in an unfavorable atmosphere, it can be closed and even aggressive. 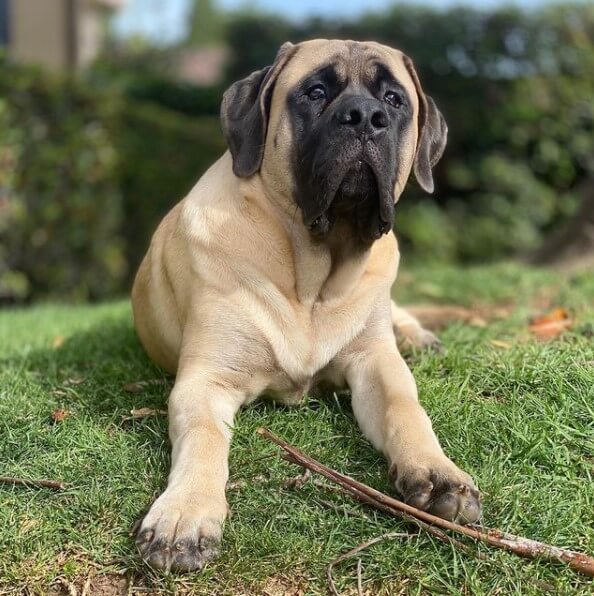 English Mastiffs are large dogs with strong immunity. However, they are prone to a number of diseases:

The large dimensions of the dogs do not allow them to be kept in an apartment, however, for a spacious country house, Mastiffs are an ideal option. The average life span of Mastiffs is 8-10 years. With proper maintenance and care, Mastiffs can live up to 15 years or more. 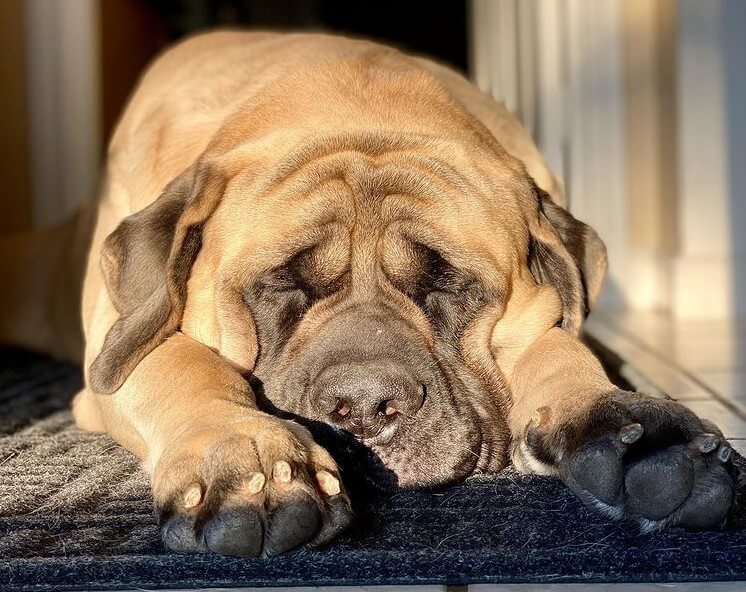 Mastiffs do not need much grooming, but their size makes compulsory procedures difficult. How to care for a dog of this breed correctly? You need to adhere to the following rules:

It is necessary to take care of the dog from early childhood so that it gets used to all procedures and is not afraid of them in the future. 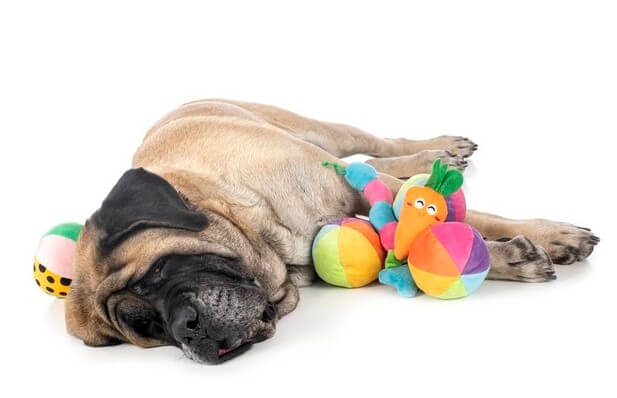 English Mastiffs are large dogs, so they need a lot of space. If you keep your pet in a cramped apartment, then you should take care of the possibility of regular walks.

You can not overfeed the animal, as the breed is prone to obesity.

The dog is very kind and loyal, not capable of offending the weak. But in dangerous situations, the Mastiff will definitely protect his master.

The pet is perfect for families with children and will not only become a good friend to them but also look after them.

Don’t trust the stereotype that Mastiffs are lazy. Each dog has its own character.