The Pointer is a beautiful noble dog that combines the features of an unsurpassed hunter and a devoted friend. One of the oldest hunting breeds has probably been heard by anyone who was even slightly interested in hunting dogs. 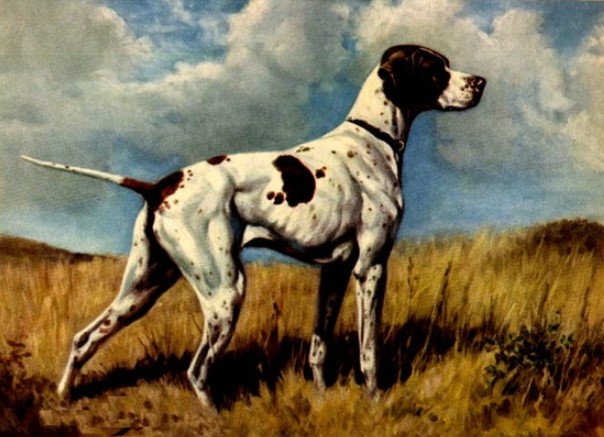 The Pointer pedigree has been going on for about 100 years, and the breed itself is at least that much older. This is evidenced by the notes of English hunters, in which descriptions of similar dogs are found. There are many gaps in the history of Pointers, but you can still distinguish some schemes of its creation. The first steps were the crossing of Hounds with Smooth-Haired Avian Dogs. Then, to fix the heads and tails, mestizos were knitted with Greyhounds. The resulting dogs were corrected with Droppers (a cross between a Pointer and a Setter), French Marriages, and a Bulldog. In the 80s of the 19th century, in order to increase energy and get a tighter shirt, Irish hunters added the blood of Foxhound dogs to the dogs.

The first breed club was established in 1891 in London. Its founder Joseph Green in 1904 clearly defined the position of the association – to defend the standard and work according to the principle of the golden mean, take into account the performance of dogs, but at the same time take care of the aesthetic appearance. 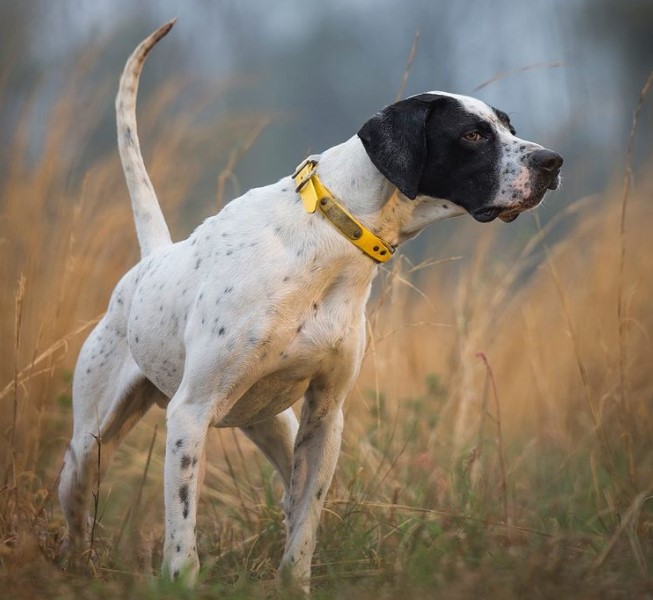 Pointer is imposing and graceful, harmoniously built and flexible with well-developed muscles and an innate ability to concentrate at work, hardy and courageous. The height at the withers of males is 63-69 cm, weight is 25-30 kg, the height of females is 61-66 cm, weight is 23-28 kg.

The head is dry and proportional. The transition from forehead to muzzle is pronounced. The muzzle is long and strong. The bridge of the nose is rectangular and deep. The lobe is large, dark, and with a lemon-white color, it can be light. The lips are thick with an almost rectangular cut and a beautiful rounding, fit tightly, slightly covering the lower jaw. Hanging ears, slightly pointed at the ends. The eyes are set straight, dark or light brown, relatively large, rounded. Strong teeth complete with a correct bite. The neck is set high. The back is strong, with a slight slope from the withers to the rump. The loin is slightly arched and powerful. The abdomen is moderately tucked up. Legs well boned and well-muscled. Feet are oval in shape with tightly clenched toes. The coat is short, dense, straight, and shiny. Colors: 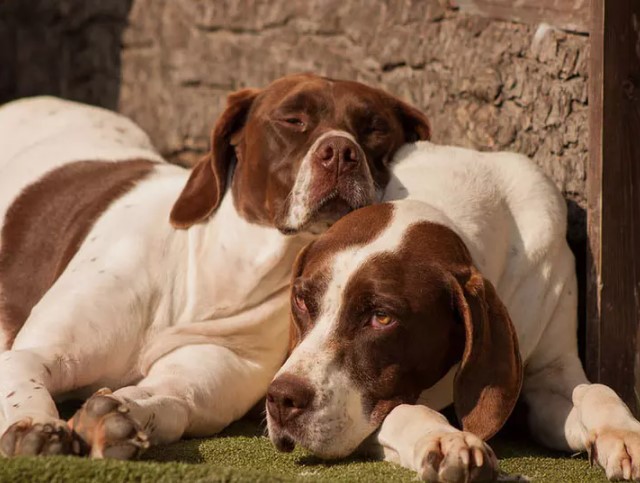 Pointers are balanced and self-confident, strong and brave dogs, but this does not prevent them from being outgoing and friendly. They are quite diplomatic and prefer to stay away from conflicts. The dog has no protective instincts, but the qualities of the watchmen are developed at a level, the dog will always warn with loud barking about approaching the guests’ house. Pointers are very sensitive and do not tolerate loneliness. The long separation from the owner can cause depression.

At home, the Pointer is an intelligent, cheerful, and temperamental dog, absolutely incapable of aggression. A great neat and lover of fun games with children, who, by the way, allows them to do whatever they want while showing enviable tolerance. In the field, a dormant instinct awakens, and all irrepressible energy spills out. On the hunt, the Pointer is prone to competition and rivalry with other dogs, he is a leader and a winner, he can be slightly self-confident and independent.

They get along well with animals under one roof, especially with dogs. Cats can only suffer because of their own independence and desire to dominate. The bird, of course, will remain the wildfowl for the born hunter. 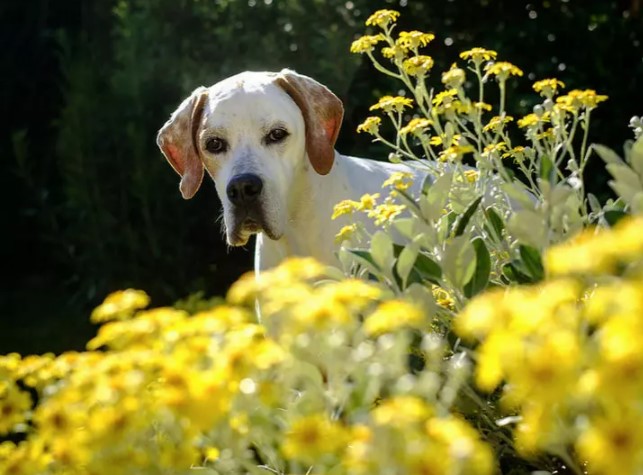 Caring for a clean, short-haired dog is not difficult. Brushing the coat weekly with a special shorthaired mitt will keep your dog’s hair from scattering around the house to a minimum. A little more often combing out will be required during the seasonal molt. It is worth considering that Pointers have sensitive skin. Bathing is often not recommended. If dirty, it is best to wipe the coat with a damp soft cloth. For a full-fledged wash, it is better to immediately choose hypoallergenic cosmetics.

Large drooping ears of the dog are poorly ventilated and the owner will have to check them regularly to ensure that the ear is always dry and clean. The claws are cut off as necessary, but it is better when they are ground down on their own while walking on a hard surface. For the prevention of tartar, it is recommended to give special treats once a week that cleanse tooth enamel or brush your teeth. Toys from the Dental series may be useful. 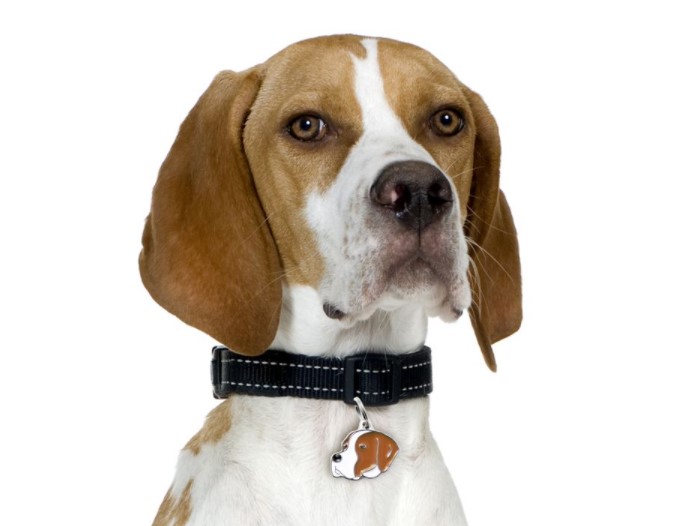 Pointers are strong and hardy dogs, but over the years of selection they have acquired a long list of hereditary diseases, and also have a predisposition to some diseases, which is associated with anatomical and physiological characteristics.

The list of diseases is rather indicative. It is not a fact that every dog ​​is a carrier of one or another disease. Nevertheless, responsible breeders try to exclude animals with any deviations from breeding and order genetic tests that are available today for hip dysplasia, progressive retinal atrophy, von Willebrand disease, and some other pathologies.

Pointers need the usual preventive measures: vaccination, deworming, treatment from lower parasites. Due to the tendency to allergies and the high sensitivity of the skin, one should carefully consider the choice of means to protect against fleas and ticks. The lifespan of a Pointer is usually 10-12 years.