Finches are bright, elegant birds. The plumage color is dominated by brown and blue, and gray, and white, and green shades. In autumn and winter, the color of finches is dull, while during the mating season they literally “bloom”. The finches have a strong beak and a long tail, powerful wings. The legs are thin, long, four-toed. 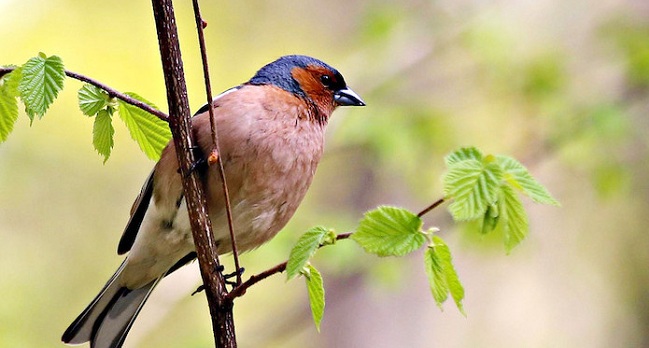 The finch, known almost all over the world, nests in areas where there are trees.
Birds of the southern habitat are considered sedentary. In cold regions where it is difficult to raise chicks, finches lead a migratory lifestyle.
The males are the first to fly to their habitats in large, noisy flocks, settling in groves, gardens, parks, forest edges.

Chaffinch is a small bird, no more than 15-16 cm long, weighing 20-40 grams. Wingspan 26cm. During the mating season, the male finch is very well-dressed:

By autumn, the male molts, acquiring an ocher color with a brown tint. The females of the finches are colored brown with a gray tint, the upper body and head are darker. Grown chicks, regardless of gender, have the color of females. 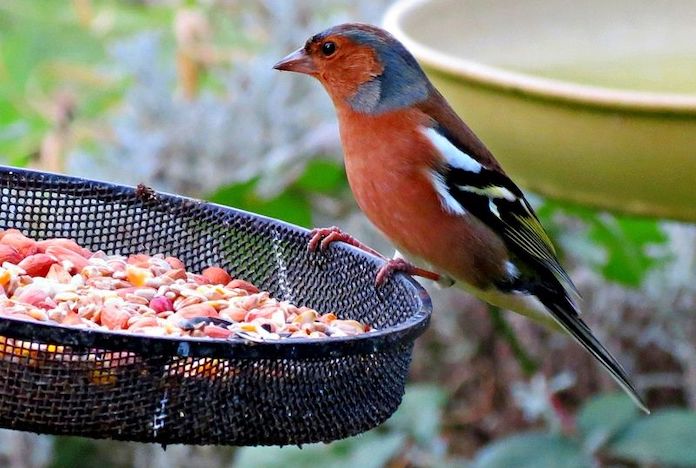 Often they take places not far from a person’s home. Females arrive in a few days. In the spring, the birds are kept in pairs. Later they keep in flocks, flying from place to place in search of food. As a rule, birds return to last year’s nests. The size of the couple’s “possessions” is about 100 sq. m.
Finches are very picky birds. They hunt insects. Their food range includes caterpillars, beetles, spiders, butterflies, slugs, insect larvae and pupae, bugs, and ants. Birds gather food on the ground, sometimes they look for insects in trees.
Finches eat plant food, pecking berries, buds, acorns, seeds, and grains of plants. From the moment of arrival, small birds destroy a huge number of pests and weeds, collecting their seeds for food. In this way, they bring tangible benefits not only to farmers.
Our parks, gardens, summer cottages are largely protected by little friends. They delight the inhabitants of villages and cities with their amazing singing, which cannot be confused with the songs of other birds.

During nesting, males show aggressiveness, not allowing other finches to approach their territory. The female is engaged in the construction of the nest. Nesting time May-June. The nest can be located in trees at a height of two meters. Sometimes chaffinch nests can be found at a height of 10-18 meters. The nest looks like a deep bowl up to one meter in diameter. The very dense base of the nest is made of small twigs, moss, and blades of grass; outside it is fastened with small pieces of tree bark or birch bark. The female covers the entire structure outside with cobwebs, disguises it with moss and lichen.
The bird lining the inner part of the nest with soft material found in the area: wool and hair of animals, down and feathers of birds. After the formation of the nest, the female finch makes the first clutch, which may contain from 3 to 6 eggs of different colors.
Clutches with greenish-bluish and pinkish eggs with a cream tint were noted. All eggs are speckled purple. Incubation continues for about two weeks by the female. For the male, this is the period of songs and feeding the female.
Sometimes the male replaces the female, and she flies to the ground in search of food. Chicks hatched from the nest have a red skin color, dark fluff on the head and back. Grown chicks begin their first flights near the nest by mid-June.
Parents continue to feed them for half a month. At this time, the male, busy feeding the emerged chicks, does not sing. At this time, the female makes the second clutch. The next brood may appear at the end of July, in August. Finches stop molting by September. Migratory finches gather in flocks, wandering along the outskirts of gardens, parks, forests, and then go to winter in warm regions. 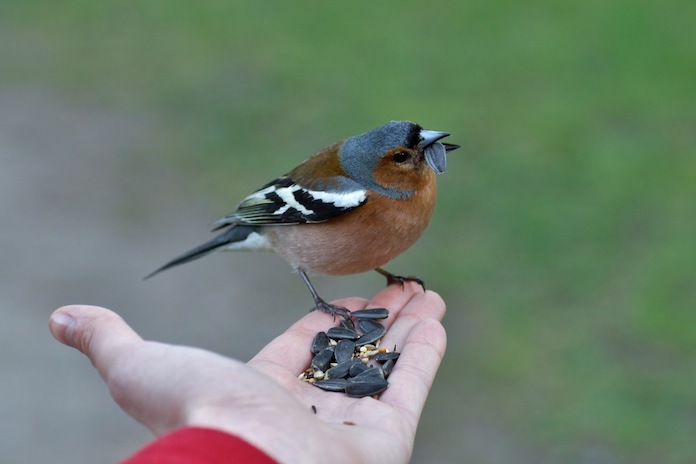 Finches are kept as a pet. However, this bird is difficult to control. The finch cannot be tamed. Accustomed to freedom, the bird behaves restlessly in the cage. The pet refuses to eat, beats against the rods. Often the imprisonment ends in illness and death of the bird, not used to the cramped conditions of the cage.
To make the finch comfortable, the cage is made spacious for it. In the cage for the finch, poles are installed so that it can jump from branch to branch. A drinker and a container with food are installed on the floor. It is important to change the water on time and remove food that has not been eaten, otherwise, the finch will get an intestinal infection.
And there are many difficulties with nutrition. In captivity, finches are fed with eggs, bone meal, cottage cheese, nuts, fruits, and vegetables. And also animal food – worms and bugs brought from the garden.
Unfortunately, domestic finches rarely sing. Living in a cage, the bird is in a depressed, nervous state that interferes with the normal performance of songs.
Keeping a finch in a cage is not a very smart decision. These birds are not adapted to life in captivity. 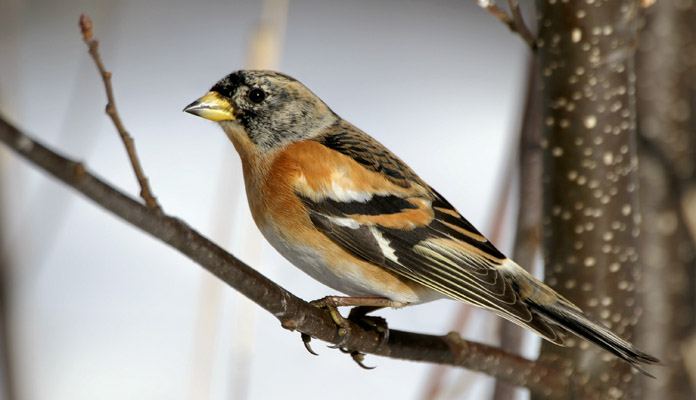 Finches sing in the spring, with the onset of the mating season. Their singing is flooded with multi-minute roulades. Concerts are arranged by males: they sit on a hill, throw their heads back and begin to sing, surrendering to the moment without a trace. Chaffinches trill solemn, joyful, rolling.
Chaffinch singing begins with quiet whistling sounds – the bird seems to be singing before the performance. Then comes the second part – the trill itself, which lasts 2-3 seconds. The performance ends with a short sharp sound (stroke). After 7-10 seconds, the song is repeated again. Only adult males use this style of singing. The first years sing less talentedly, without breaking the song into three described parts. Their trill is smooth, with less intonation. By the way, females also sing throughout their lives.
The males learn the technique of species singing through onomatopoeia to adults. The repertoire of singing masters includes up to 10 variants of a specific song. They have a song or a trill melody. When singing in groups, the flock hums 2-3 versions of songs.