Among the fossils in South America, scientists from Argentina and the United States managed to find parts of a mammal very similar to the saber-toothed squirrel from the famous cartoon.
Scientists have not yet been able to establish the exact moment when mammals appeared on Earth. Most paleontologists place the first warm-blooded animals 220 million years ago in the middle of the Triassic period, around the time of the appearance of the first dinosaurs. The question of the prevalence of mammals on the continents of the ancient Earth also remains open. Perhaps they settled everywhere only after the extinction of the dinosaurs, 65 million years ago. 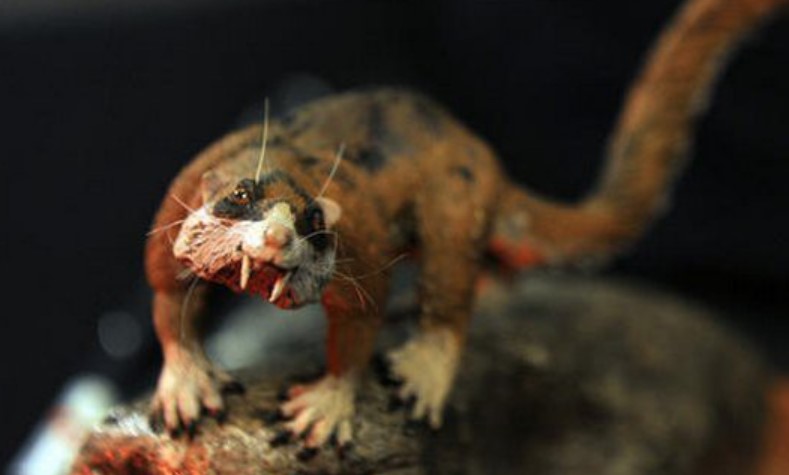 The South American saber-toothed squirrel, according to Guillermo Rouger of the University of Louisville (USA), was found in sediments of the Candeleros Formation in southern Argentina’s Patagonia. The rocks of this area were formed 100 million years ago and form the Cenomanian stage of the end of the Cretaceous period.

Hence, we can conclude that the squirrel Cronopio dentiacutus lived 94 million years ago in tropical forests.
Scientists got an incomplete skull, part of the teeth and jaw of a saber-toothed squirrel. This is only the second fossil record that proves that mammals were in South America as early as the Cretaceous. The previous one was Vincelestes neuquenianus, which lived here 60 million years before the squirrel.

The found saber-toothed squirrel (about whose relatives you can see in the cartoon turned out to be very different from its closest relatives from Africa, which entered the southern continent of Gondwana with South America.) Also, this squirrel does not resemble its distant relatives in Laurasia, the northern continent.
The composition of the teeth in the jaws is not typical of the already found mammals of the Cretaceous and Jurassic periods.

The canines of Cronopio dentiacutus are much longer than the rest of the animal’s teeth and are a record among all early mammals. The saber-toothed squirrel’s skull is strongly flattened from the sides and elongated, this indicates the food specialization of the animal and its primitiveness (by the way, the absence of features of placental and marsupial mammals speaks of this).

And although the jaws themselves were rather weak, they could open wide when bitten, which made it possible to use sharp long fangs. But these small ancient mammals, after a few hundred million years, developed into elephants, saber-toothed tigers, and giant deer, primates, and humans.