Heartbreakers, jokes, and occasionally lovable clumsy dogs – the little mastiffs steal the heart of their humanity in no time at all. If the Great Dane is about to move in small format, a suitable French Bulldog name is missing. In this article, you will find ideas ranging from fun to charming to traditional.

Which dog name goes with Frenchies? Which names are suitable for males and names for females? They are not exactly the sportiest four-legged friends. Her talent is clearly in spreading a good mood with her friendly nature. Since the four-legged friends, weighing up to 14 kg, are known for their sense of humor, families of Frenchies often opt for a funny French Bulldog name. Many Old High German names, which give the little bulldog a certain nobility, sound funny and at the same time score with a profound meaning.

There is also the inspiration for humorous names from the areas of food and drink as well as from the world of cartoon characters. Dog owners go back to the roots of Frenchies who use French dog names or cities. Pettime presents lots of nice name ideas in this article and will help you find your favorite! 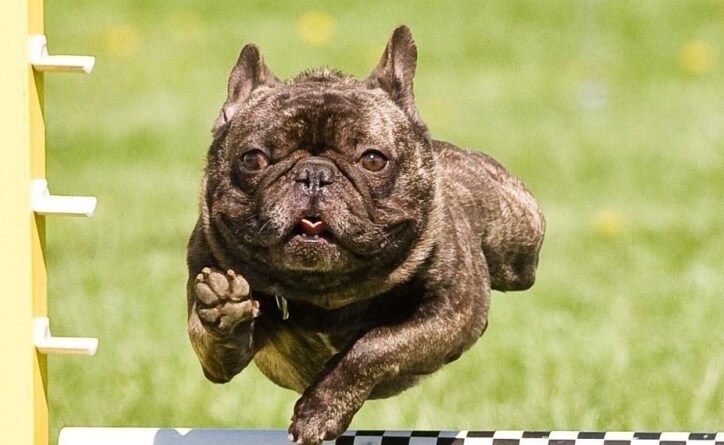 A neat gait and an elegant build – admittedly, these two traits don’t necessarily apply to Frenchies. With a bit of irony, the Old High German name Albert, which translates as “the nobleman”, is an excellent match for a male dog.

An essential external characteristic of the French Bulldog is its eye-catching “bat ears”. So it is a good thing that the famous cartoon character has a name that translates as “batman”.

Fiery temperament: Every now and then a leisurely French Bulldog can have its 5-minute seizures. Carlos – translated as “free man” – fits perfectly with a Frenchie who likes to sweep through the house and garden.

French bulldog names can reflect traits. Lennox means “the calm one” and is therefore ideal for the gentle breed of dog that is not easy to be disturbed.

French Bulldogs develop a very close bond with their caregiver. The beautiful boy’s name Levi emphasizes this lovable behavioral trait with the meanings “the connected” and “the loyalty”.

Pepe is clearly one of the cheeky-sounding dog names and therefore fits perfectly with the witty Frenchies! However, the meaning of the Spanish name is profound and reads: “God adds”.

The French bulldog ranks second among the most popular dog breeds in Germany. The meaning of the name Tillmann’s “man of the people” can, with a little imagination, be interpreted as the “four-legged friend of the people”.

The presence of the friendly and affectionate Frenchies makes mistress and masters happy. Therefore, Bea, which is translated as “the lucky one”, fits a bitch perfectly.

French bulldogs have hardly any hunting instinct and, with their friendly nature, are ideal beginner dogs. The name Frieda indicates her meek nature and is translated as “the peaceful one”.

French Bulldog lovers will love her friendly demeanor. The traditional name Heidi underlines the fine character because it means “of the noble being”.

A French Bulldog should never be underestimated! They are considered to be extremely tough and brave and are therefore perfect candidates for the name Kaya, which translates from Japanese as “the warrior”.

From the world of comics: Wilma and Fred Feuerstein’s daughter goes by the beautiful name Pebbles. It sounds funny and, with the meaning of “pebbles”, is particularly suitable for blue French Bulldogs.

An English variant of the name Sarah: Sadie sounds like a lovable French bulldog lady. The beautiful sound is topped by its majestic meaning because Sadie stands for “the princess”.

A declaration of love for home: the French city of Toulouse makes a good name for a bulldog that originated in France.