German Shepherds are very intelligent, attractive, and obedient animals. That is why many people have such a pet in order to feel protected and have a real, reliable companion. However, a shepherd dog needs to be carefully monitored and certain aspects of grooming should be known. One of these questions is information about animal mating.

How to Breed German Shepherd Dogs 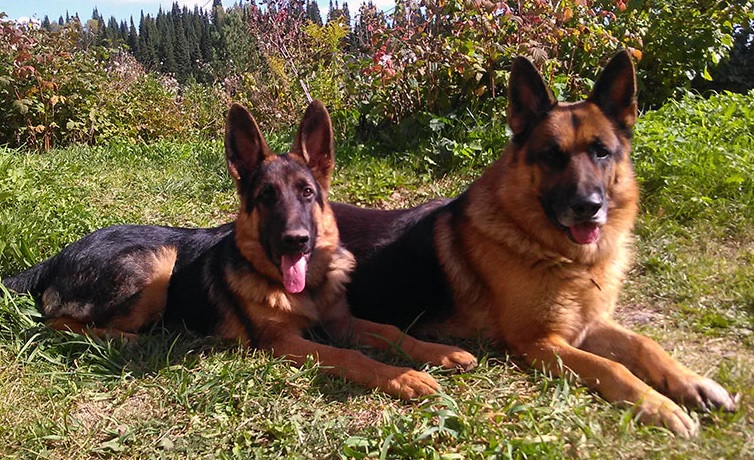 Before the first mating, you need to make sure that the animal is fully formed and the period of puberty has passed. For the female, the first experience ahead of schedule will be very undesirable. She can completely stop in growth and lose the attractiveness of the exterior, the backbone will not be fully formed. In males, such problems occur less often, but they do happen.

Important! Before mating, you need to study the issues of the dog’s entry into adulthood. Find out in which heat it is better to knit a female and what should be the actions of the owners at the first mating.

The female is mated for the first time only in the third estrus. This usually happens in one and a half to two years, although all terms are purely individual. In any case, German Shepherds grow rather slowly and go through a period of adolescence and formation for a long time.

Dogs in a pair should be strong and fully formed. Only in this way can the litter grow healthy and strong, receiving all the best from the father and mother. The females must have a strong bone, eat well and lead an active lifestyle.

Only healthy animals that have reached marriageable age are allowed for breeding. It is also not recommended to use males earlier than 2 – 3 years. Otherwise, there may be problems with the development of the dog in the future.

The beginning of the first estrus in a female occurs strictly individually, depending on many factors. Usually, it is 6 – 10 months of the life of a shepherd puppy. During this period, natural instincts are already taking their toll, but the owner needs to carefully monitor the pet in order to prevent early pregnancy.

By tracking the onset of the first heat, it is easy to figure out when the second and then the third heat will begin. It is for the third time that you can mate with a pedigree dog. Without fears that the development of the pet will stop, you can allow her to breed and plan a pregnancy.

The first mating is important for pets of both sexes. To untie a “German” male, you need to find an experienced, not aggressive female who will accept “courtship” favorably. It is better for dog owners to always be present during intercourse since it is not known how they will behave in front of strangers in such an environment.

The female is kept on a leash to exclude the possibility of aggressive attacks on the gentleman. Inexperienced pets usually try to hide or run away. Before mating, it is best to show the female to a veterinarian to check for vaginal narrowing. And also grease the loop with fat cream.

If the dog is overly excited and tries incorrectly, it is necessary to separate the animals in different rooms and give them a little rest. If you calculate the timing correctly and choose correctly the day of estrus, the female will give herself to mate without resistance.

What Help is Needed From the Owners?

German Shepherds usually do well on their own. However, they will have to be given enough time to play with each other, run, “talk”. The owners of both dogs must be present at this time.

If nevertheless, attempts do not lead to a good result, it is worth trying after a day or two. In order for the male to calm down and not overexcite, the owner is advised to keep his hand on the croup when he knits the female.

It is imperative to be in the dog’s field of vision, she must be sure that everything is going according to plan and the owner is nearby. In addition, when aggression is shown, you can always react quickly and separate the pets.

When Should I Stop Breeding My German Shepherd?

You can’t mate a shepherd dog in every estrus, which usually happens twice a year. This will lead to the loss of all nutrients by the pet’s body, as well as developmental stops. The consequences can be dire.

Important! Females over 6 years of age should not be mated. This will lead to serious complications.

The optimal time between births of a female is considered to be a period of one year. During this time, the animal manages to recover and again fulfill its maternal responsibilities. Although even in such conditions, the body of the “German” is working hard.

Mating German Shepherds is not too tedious and difficult. Having learned a few basic secrets of this process, any owner will be able to go through the stage with the dignity of a seasoned dog handler or veterinarian.

Alternatives to Breeding your German Shepherd

If you are looking for a breeder, there are a few different options you can do. One option is to check the American Kennel Club marketplace. They only include breeders and puppies that are registered with them.

Another option is to look for a local breeder. For example, if you are looking for German Shepherd Breeders in Ohio you could check local Facebook groups or do a Google search. An advantage of a local breeder is that you can visit the puppies and ensure they are kept in good conditions.

Finally, don’t immediately discard the idea of getting a Germany Shepherd from a shelter. Many shelter dogs are well behaved and would love a brand new home. They are also more affordable than getting a dog from a breeder. However, you won’t always know the pedigree of a dog from a shelter.