The biological method of controlling algae in an aquarium is based on the use of fish, which are adapted to scraping and eating lower plants. One of these fish – girinoheilus – will be discussed in our article.

Gyrinocheilus (Gyrinocheilus Aymonieri), or, as it is also called, “Chinese algae eater” appeared in amateur aquariums only in the middle of the 20th century. Despite its discreet color, it remains one of the most popular fish, as it helps aquarists in the fight against algae.

Surprisingly, in its historical homeland, in the countries of Southeast Asia, girinoheilus is a commercial, and not an ornamental fish, because in nature it can grow up to 25-30 cm. The historical names “Chinese” and “Indian algae eater” have nothing to do with the natural habitat of girinoheilus because they do not live in any of these countries. 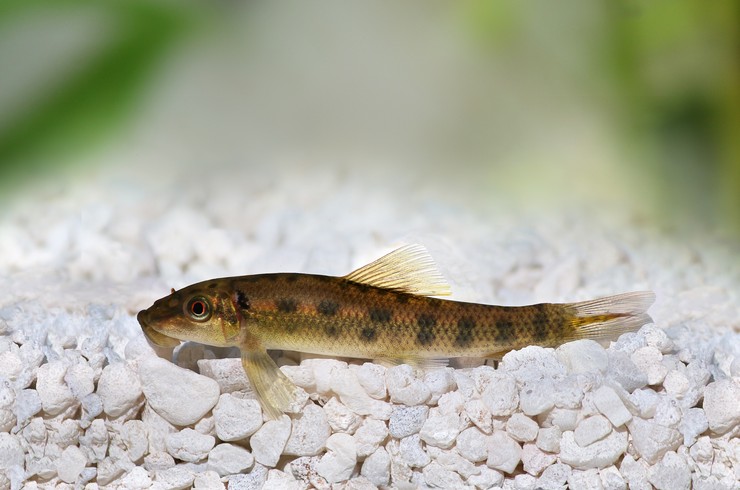 Due to the special structure of the mouth, girinoheilus are able to scrape off algal growths on stones and decorations, especially young individuals are famous for this. Unfortunately, with age, the fish prefer to eat artificial food.

Girinocheilus has an elongated, streamlined body that creates the least resistance to water flow. The fish has no whiskers, but small spines are located around the mouth opening. The mouth has the shape of a suction cup, thanks to which the girinoheilus firmly adheres to the walls of the aquarium, stones, decorations, and the rough plates allow scraping off algae. In order to completely free the mouth from the respiratory function, a pair of special gill openings has formed in the girinoheilus, through which water enters the gills. 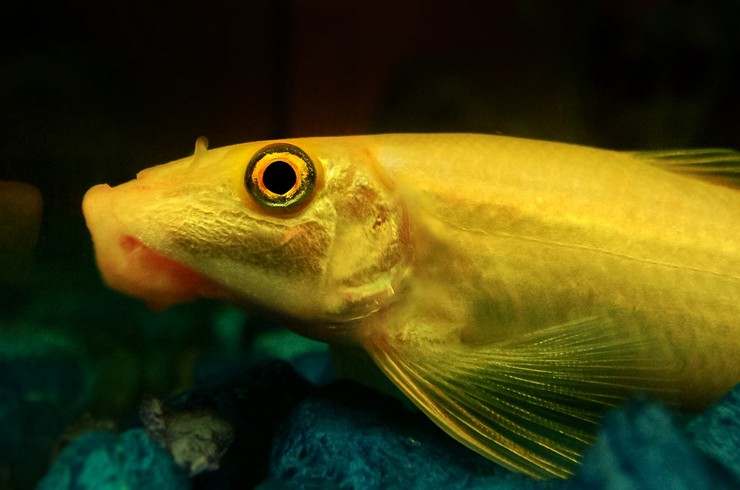 The size of fish in home aquariums usually does not exceed 12 cm. The color of wild species is predominantly yellow on the sides and brown-gray on the back. But in aquarium culture, fish with a yellow or orange color is most common. This form is called “golden”. Sexual dimorphism is not pronounced.

The Chinese seaweed eater is often confused with the Siamese seaweed. But these are two completely different species, the latter has a mouth of the usual shape, and a horizontal black stripe runs through the entire body.

The first scientific description of girinoheilus dates back to 1883. Fish are widespread in the waters of Southeast Asia. They can be found in countries such as Vietnam, Thailand, Laos, Cambodia.

The biotope characteristic of Girinoheilus is a mountain river or stream with a strong current, the bottom of which is strewn with boulders, pebbles, gravel, and sand, and numerous submerged tree roots create a large number of natural shelters. Very often it can be found in shallow water bodies, where the bottom is well illuminated by the sun, which means that algae are actively developing.

The first specimens of the fish came to Germany in 1956, after which the species spread widely throughout the world. It is not an endangered species, however, populations in some countries are rapidly declining due to fishing.

The most common form of girinoheilus in the aquarium hobby. It is called gold for its yellow or orange body color. Sometimes dark spots may appear on the sides. The usual size in an aquarium is 10-12 cm. 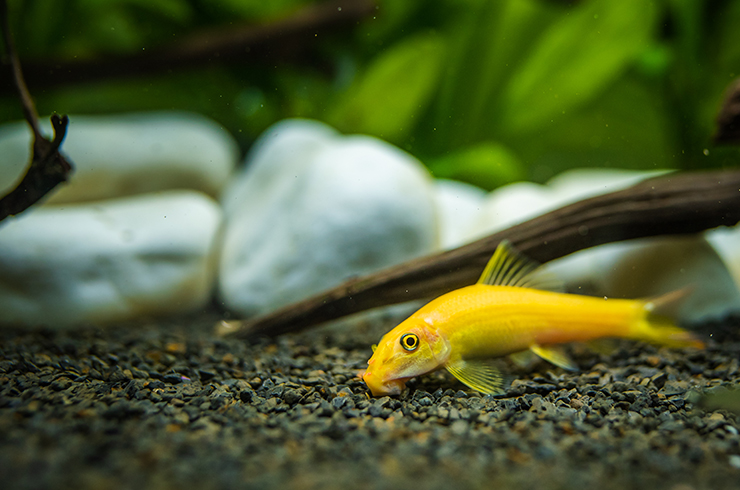 Girinoheilus can be kept singly and in groups. However, the latter is true only for young individuals. Large fish become territorial and do not tolerate in the field of view not only congeners but also any fish similar to themselves.

The minimum recommended aquarium volume is 100 liters. It must be covered with a lid because girinoheilus can easily jump out of the aquarium. It is best to use the medium to large rounded pebbles as soil, from which it will be more convenient to scrape off algae. It is helpful for fish to have some algae on the walls and decorations in the aquarium, so they will exhibit the most natural behavior. There must be plenty of hiding places in the aquarium for the fish to hide in. 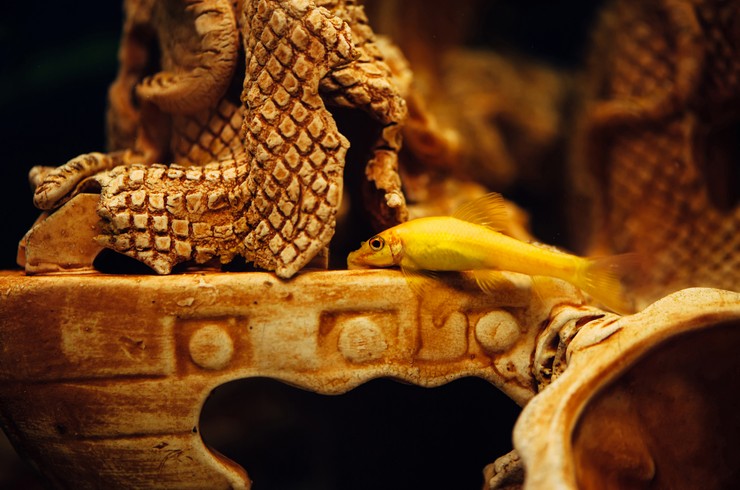 Since Girinoheilus are mainly inhabitants of mountain rivers, they love very clean water, rich in oxygen, therefore an effective filter and compressor is needed in an aquarium. It is also desirable to create a current. Once a week, 30% of the water must be changed together with the soil siphon.

It is desirable that the aquarium be densely planted with plants, the girinoheilus hardly damage them. Life expectancy in comfortable conditions is about 10 years.

The compatibility of girinoheilus is directly related to the size of the individuals. Young fish behave very calmly and get along without problems with both their relatives and other peaceful fish. In adult fish, aggression is higher, they can no longer tolerate representatives of their own species and fish of similar size, so they often have to be seated. 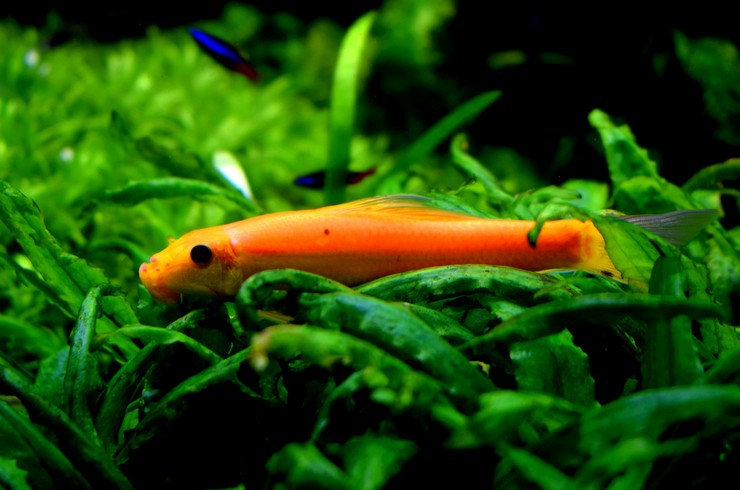 Best kept with large, mobile fish that inhabit the upper and middle layers of the aquarium, such as barbs and iris. It is highly undesirable to be adjacent to goldfish, scalars, and discuss – there are many examples when girinoheilus damaged the scales in these species.

In nature, in addition to the main food product – algae – girinoheilus gladly eat insect larvae, worms, and other small invertebrates. Therefore, when kept in an aquarium, the food must be balanced and contain both animal and vegetable products.

Good quality dry food in the form of tablets/wafers is best suited for feeding girinoheilus. They quickly sink to the bottom and retain their shape for a long time, which allows the fish to easily scrape off slowly softening food. Foods such as Tetra Pleco Tablets, Tetra Pleco SpirulinaWafers, and Tetra Wafer Mix are good choices. Each of them is a complete food, providing the necessary ration for girinoheilus, and are also excellent for feeding other bottom fish species. They contain high-quality fish ingredients, shellfish, and, of course, the nutritious algae Spirulina. 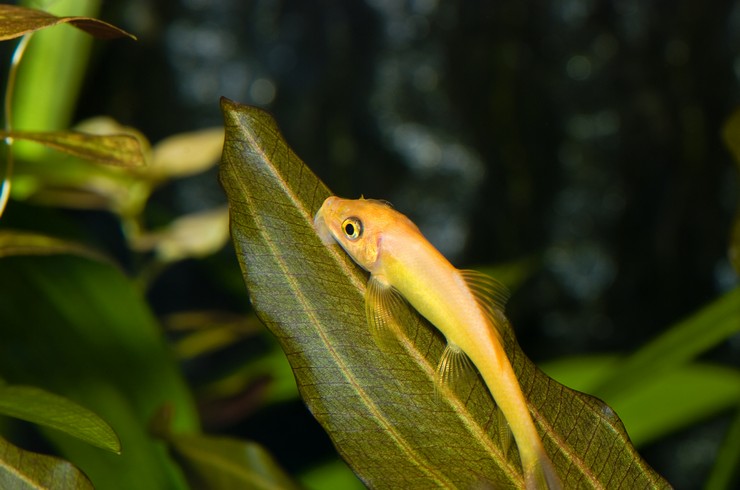 You need to feed the fish daily, but do not forget that, having saturated with dry food, girinoheilus will less effectively fight green algae. Therefore, if you have an outbreak of lower plants, it is better to arrange a small “hunger strike” for the fish.