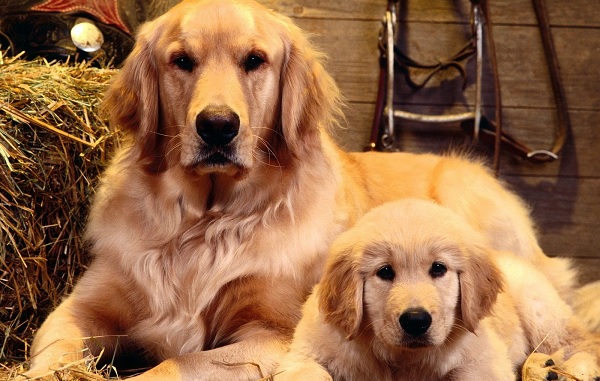 Usually, retriever puppies are sent to a new home after they are 2 months old. At this age, they can already painlessly leave their mother and begin to get acquainted with the world around them. To make everything go as easy as possible, experts advise in the first 2-3 days of living in a new house to try to recreate for the puppy the conditions in which he lived before – the same food and daily routine.

According to the average data at the age of 8 weeks, the golden baby must meet the following parameters:

Weight. The puppy’s body weight should not exceed 9 kg and be at least 7 kg. You should not try to specially feed the dog so that it seems larger and more powerful, this can only harm it. You need to feed the baby strictly on schedule, the portion sizes should not be less or more than the norms recommended by specialists.

Height. The height at the withers of a two-month-old puppy should be at least 30-33 cm.

At the age of two months, a small retriever looks more like a stuffed toy than a hunting dog, but after about six months it will completely change both outside and inside. Golden will turn from a cute and fluffy “bear” into an angular teenager who will have to fight a little in order to gain respect and recognition of authority.

Important! Dogs of this breed are recommended to be trained in the period from 4 to 8 months.

Emotionally, Golden Retrievers are considered adults after they turn 2 years old. By this time, the development of the body and the formation of the dog’s appearance will end. It is the age of two that is considered the best for a retriever, so during this period, they demonstrate their most positive character traits for a person – obedience, affection, loyalty, friendliness.
As for the parameters established by the standard, the puppy can reach already by 12 months:

Weight. The maximum weight for an adult male is 45 kg, the minimum is 26 kg. The bodyweight of females is slightly less – 25-36 kg. Overweight dogs are at risk of becoming obese and a host of other diseases.

Height. The height at the withers of an adult male retriever varies between 56-61 cm. Females are usually 5-6 cm lower.

Important! Old age comes to Goldens after they turn 8 years old. An elderly dog may lose a little weight or, on the contrary, gain weight, due to reduced physical activity.